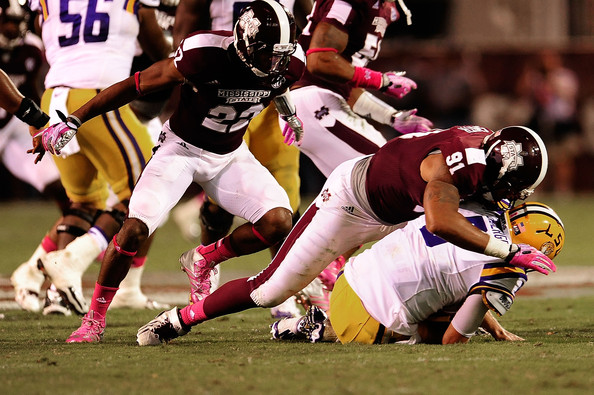 – Intriguing size
– Exceptionally long arms and big hands, 34 and 10 5/8 inches respectively
– Get his arms extended in both phases, creates space between him and the lineman
– Quick, active hands with a strong initial punch
– Potent swim move
– Above average first step
– Plays with proper pad level
– Strength to hold POA and seal the edge
– Played all over the defensive line
– Some experience dropping into coverage
– Productive career
– Flat out playmaker

– Lacks true position, tweener
– Struggles with his bend coming around the edge, won’t win with speed rush
– Ends up on the ground too often when rushing off the edge
– Occasionally will get moved off his spot in the run game, especially when working against the interior line

Though I never watched his tape before this year, reading past stories about Smith painted him as an underachiever who never lived up to his potential. If that was the case, then consider 2014 a complete turnaround. Because there’s plenty of good tape from his senior season.

Physically, he’s impressive. Size gives him versatility and doesn’t box him in to one position. Long arms and his hands may wind up being the biggest in this year’s class of any player.

I’ve only “scouted” for a few years so I haven’t been able to develop much of an overarching philosophy. But find me a defender with quick hands who doesn’t get stuck on blocks – remember my love of Chris Borland last year – and you’ll gain a fan.

And that is Smith’s best trait.  His hands are active, quick, and their size packs a major punch. Throw in the arm length that lets him create separation between the opposing lineman, and you have a player who constantly wins at the line of scrimmage.

Kicked inside to one tech in a lot of sub-package football. Watch the arm extension, I’ll throw up a screenshot below too, taking control of the center, and then shedding him with ease.

And another look at the arm extension he gets with his long frame. 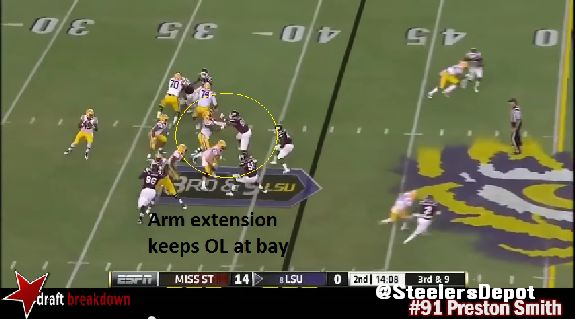 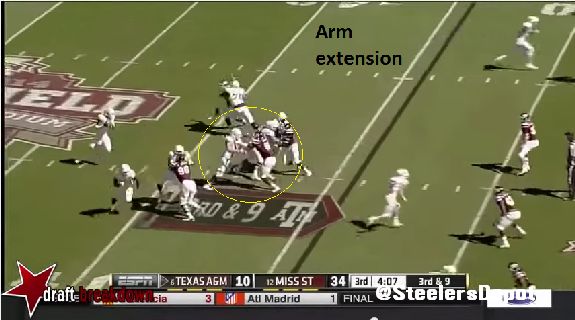 Fantastic look at it here. Smith uses a rip move to get under the lineman, swap hips, and finish with the sack.

Or him at defensive end. Wins inside with quick hands to get pressure and force a throwaway.

See it in the run game, too. Right end. Takes on the block, sheds it, and engulfs the runner for the tackle.

Interior pressure is the best kind of pressure you can get. Do it and you flush the quarterback out, take away half the field, and force him off his spot. That’s what Smith offers.

Watch him occupy all three interior lineman, still collapse the pocket, and help create a sack.

He combines his hands with a quick first step. Able to get penetration, especially when asked to slant gaps.

The Bulldogs asked him to sporadically drop into coverage from an EMOL and interior spot. Shown respectively below. Some experience dropping but minimal.

Versatile kid who played every technique along the defensive line, one, three, and five, and that use with his hand up. That versatility will let coaches be even more creative with him. 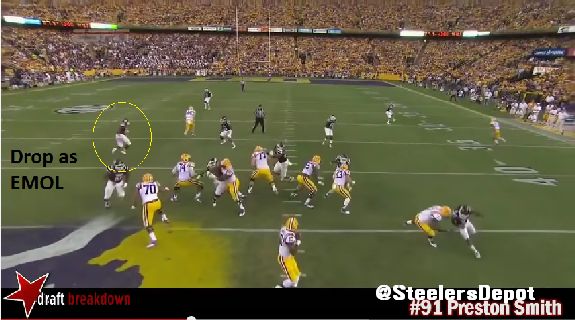 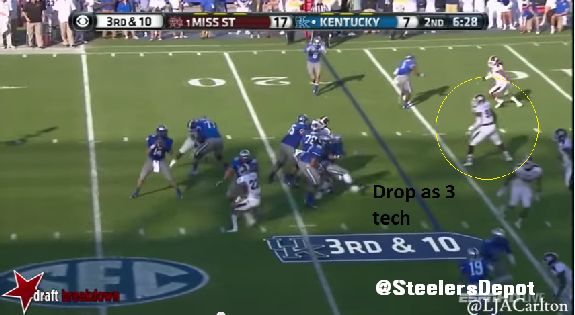 There weren’t many glaring negatives in his 2014 tape. The biggest was an issue of showing bend rushing the edge. Doesn’t show the flexibility you’d like to see, isn’t going to win with just speed, and ends up on the ground too often because of it.

Thankfully, there is a little bit of All-22 tape on Mississippi St this year to help illustrate it. 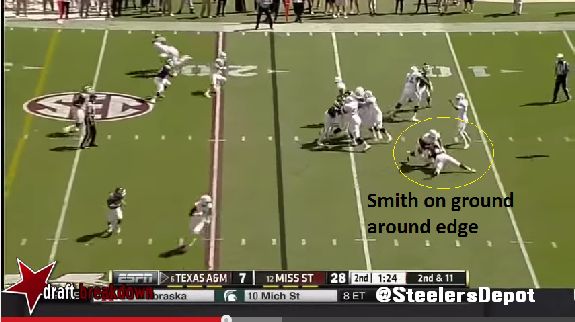 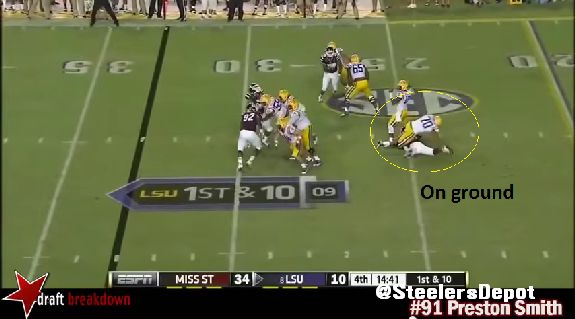 Head down, flat back on this edge rush against Texas A&M. Not going to win at the next level. No way. 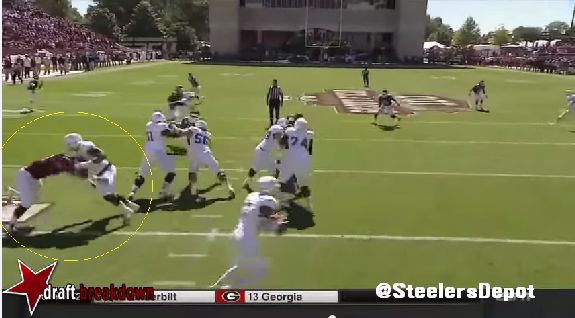 But that one issue presents a dilemma. Where does he project at the NFL? Can he be a 3-4 outside linebacker? That lack of bend around the edge is concerning.

Is he a 3-4 end? He’ll have to add a lot of weight. Maybe an unreasonable amount, even if he has the height and arm length for the position.

Is a 4-3 his best fit? If it is, it takes him out of the equation for the Steelers.

I’m not a fan of player comparisons but I keep going back to the Green Bay Packers’ Mike Neal. He dropped a ton of weight, from 290 to about 263, to play all over their front seven. A true defensive end/outside linebacker hybrid.

It would take some scheme tweaking and an open mind from the Steelers, and a bigger emphasis on the now infamous “Leo” role, but I’m a proponent that talented players will find a way to fit into your scheme.

Still, it’s an excellent discussion to be had on if/how the Steelers could use him. I still haven’t come up with an answer I’m completely confident in.

Count Smith as one of those talented players. I wouldn’t turn him away if he’s sitting there in the second round.

Games Watched: at LSU, vs Texas A&M, vs Auburn, at Kentucky, vs Alabama