Today, back with a focus on potentially the biggest need for the Steelers come the draft. Outside linebacker. And one of the top prospects in this class. Missouri’s Shane Ray.

– Lankier frame, don’t see a lot of muscle, especially in his lower body
– Hand use/punch not always effective, pretty inconsistent
– Lacking in upper body strength, much more effective gap shooter than taking on blocks
– Has some trouble shedding once defender locks on
– Won’t always stay square to his blocks
– Primarily played just one spot
– Didn’t play with his hand up
– Only one season of production

Even the harshest critics of Ray can’t deny the phenomenal – and that isn’t an exaggeration – athlete he is. His first step is special and he compliments it with the flexibility necessary to get skinny along the edge and getting shoved up the arc.

Whips the left tackle, turns the corner without being touched, and records the sack.

Does the same here versus Florida, forcing a fumble the Tigers would scoop and score for six.

To be a Steeler, you better hustle and run to the ball. And I love that about Ray. He may have one of the best motors I’ll wind up seeing this year.

Runs this play down in the last minute of a blowout victory. Tigers are leading 31-10 with just over a minute left. Didn’t have to chase the catch but chose to anyway. Lot of respect for players who can do that. Reminiscent of Stephon Tuitt’s tackle against the Baltimore Ravens in 2014.

Ray took over games in 2014. Two sacks against Kentucky. Four tackles for a loss, two sacks, and a forced fumble in a win against UCF. He would have four games of 2+ sacks this year.

For a player who is capable of winning with just his speed, I did appreciate him attempting to have a well-rounded game. Variety of rushes. Will convert speed to power on his bull, rip the edge, and attempt a spin.

It’s not always effective, however. He tries to hand fight but his punch doesn’t always work. I’ve seen it look effective but that might be against segmented offensive tackles who can’t move and defend a punch at the same time.

Here’s him failing with his punch. Looks weak and he ends up playing too tall on his rush. Easily absorbed.

Slightly undersized weight wise with a skinny frame. Creates an issue in the run game. But it’s technical, too. He didn’t have to take on many blocks.  Missouri let him shoot gaps and get penetration. When he did take blocks on, he sometimes failed to stay square, getting turned instead, and taken out of the play. 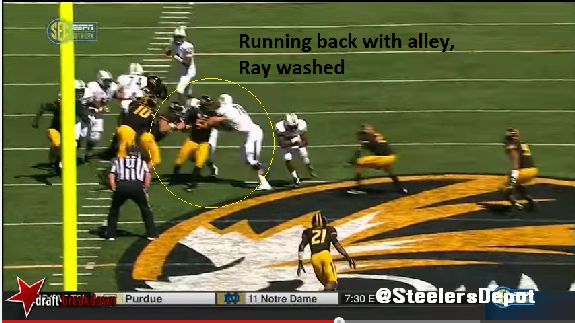 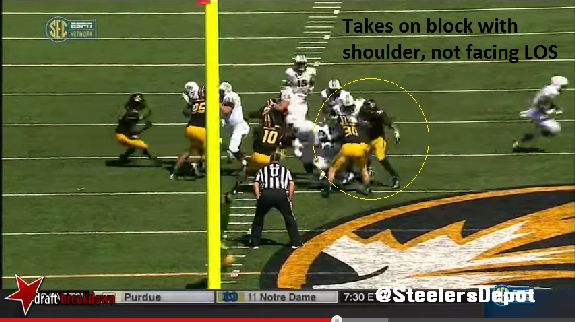 There’s some lower body strength that needs to be added. Don’t see a lot of muscle in his legs. Which, granted, is odd because of how explosive he is off the line. 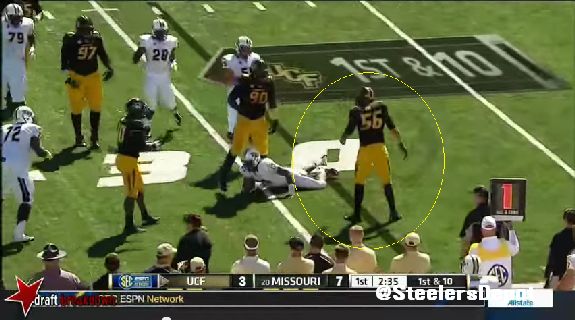 You tell me what you think about his build. Maybe I’m wrong.

If he does have to add strength and weight, it does run the risk of him being slower off the edge.

In the first game I watched against South Carolina, Ray was the RDE but kicked inside to LDT in sub-package. In the three other games, he played strictly at RDE.

It is disappointing that despite his repertoire, he’s still winning mostly by speed. But that is something that could be coached. At least he’s showing it.

And his weakness against the run is too much for me to overcome from a Steelers’ fit. Need to be stout and able to take on blocks. Set the edge, be the force defender, and get the runner to cut inside to the defense’s help. I’m not convinced Ray is able to do that.

I still like him as a prospect. He may fit best in a 4-3 where he can pin his ears, get upfield, and penetrate.

But as a fit for the Steelers, I tend to be more lukewarm on. I’d take someone like Bud Dupree over Ray, even if Dupree needs to get better against the run, too. Dupree is heavier, a bit stronger, and does a better job shedding from a position he’ll play at the next level – outside linebacker.

Games Watched: vs UCF, at South Carolina, at Florida, vs Kentucky