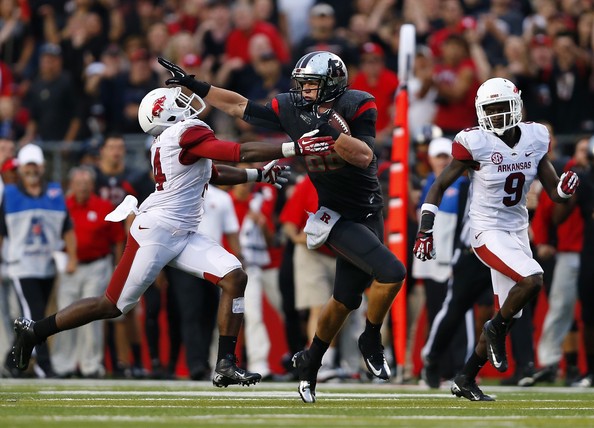 2015 is being considered to offer a weak tight end class. But with the chatter of the team needing to upgrade there, it’s well worth looking at our second of this young draft season. Today, breaking down Rutgers’ Tyler Kroft.

– Big frame with a lot of room to grow into
– Plus athlete, vertical threat down the seam
– Size and speed becomes a matchup problem for defense
– Good first step off the line
– Looks fluid out of his breaks and a crisp route runner
– Asked to run a variety of routes
– Doesn’t allow himself to be rerouted, able to be physical and win vs the chuck zone
– Willing run blocker, looks to finish
– Uses size to seal/down block
– Asked to pass block more than most college tight ends
– Moved around the field, received work everywhere (in-line, slot, backfield)

Kroft didn’t need to catch any passes to show the type of athlete he is. I actually think he’s faster straight-line than Maxx Williams, arguably the top tight end of this year’s class, and will time better at the Combine.

He didn’t need to catch passes to show that off. Watch him get separation down the seam off playaction. Can see the burst and straight-line speed.

He’s shown good tape on the catches he did make, sparse as they were. It was just a short gain but Kroft’s route is crisp. Gets out of the top of his break quickly and plucks the pass away from his body.

Ignore the box around the defensive end on this one. He’s at the bottom of the screen.

But you do have to go back to 2013 to see more of his receiving ability. His Arkansas tape from 2013 is the best you’ll find.

Watch him run down the seam and bend his route away from the safety for this long catch and run.

While his run blocking did improve from 2013 to 2014, as you’d expect, it still has a long ways to go. Lead blocker in the GIF below but whiffs in the lane, falling flat on his face.

Though this is in pass protection and against a talented defensive end, the technique is poor. Has trouble sinking his hips in order to maintain leverage and never gets his arms extended. 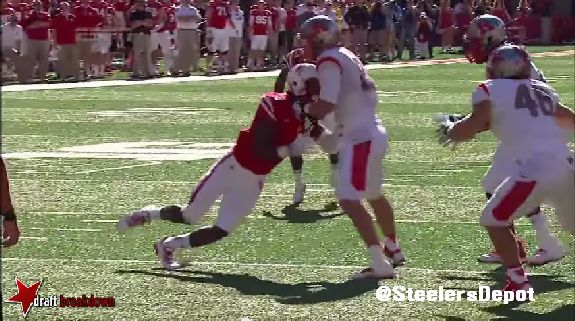 Will drop some passes, too. Can’t hang onto this seven route that would’ve resulted in a first down.

The 2014 stats are pretty disappointing. Never cracked the 50 yard mark in 2014 and was held out of the end zone the entire year.

Part of the reason may have been a change in coaching staffs. The Rutgers’ offensive coordinator from 2013 left to become the tight ends coach of the Detroit Lions and Kroft couldn’t replicate the results under his replacement.

He also played with a sub-par quarterback in Gary Nova, who just turned in a terrible performance in the Medal of Honor Bowl, and doesn’t look like a quarterback even worth bringing into an NFL camp.

A guy like Maxx Williams is clearly the better prospect but Kroft is a great project pick at a cheaper price tag. There are shades of Eric Ebron in his game, minus the production. Plus athlete but with questionable hands and blocking that needs refined.

Under its new guidelines, the advisory committee’s recommendation for Kroft returns to school means they don’t anticipate him to be a first or second round selection. That’s obviously not infallible but getting Kroft in the third round is a high upside pick in a world filled with move tight ends.

Should the Steelers not go after for someone like Williams, Kroft is a pretty good consolation prize.