After focusing on the offense yesterday, we’ll flip over to the defense today. Breaking down one of the top cornerback prospects in this class, P.J. Williams.

– Frame isn’t spectacular but certainly possesses the size to play the position at the next level
– Aggressive corner capable of playing press coverage
– Confident in himself, not afraid to challenge – and win – at the line against bigger receivers
– Can bump and reroute smaller receivers
– Fluid hips and a smooth turn
– NFL speed
– At his best when the ball is in the air
– Capable of playing the pocket, shows strong hands to swipe through the catch point and break up passes
– Recovery speed and shows proper technique when beat
– Willing to get his nose dirty against the run, doesn’t shy away from contact
– Capable of playing off coverage and zone, not just a press man corner
– Variety of assignments, played all three corner spots, part of team’s blitz package
– Success in big games

– Some fairly serious technique issues with his punch
– Punches with wrong hand off the line, keeping his hips closed
– Not a sound, wrap up tackler and will miss some
– May trust himself too much and sit in his pedal too long
– Only a two-year starter
– Minor injury concerns

– Declared after junior season
– 74 tackles, 6.5 tackles for loss, 1 INT in 2014
– Four career interceptions
– All-ACC Second Team in 2014
– Defensive MVP in National Championship game in 2013 (7 tackles, 1 INT)
– Missed one game in 2013 and another in 2014, latter due to a pulled hamstring
– Played safety in high school before moving to corner at FSU
– Chose Florida St over Alabama and Miami (FL)

Though he has the talent to play in any scheme, it’s fair to classify Williams as a classic Cover 2 press corner. When he’s at his best, he can bump receivers at the line with the fluidity to turn and run in coverage.

In the clip below, Williams bumps this 6’2 Clemson receiver off the line, turns, and pins him to the sideline. To top it off, he finds the ball and makes the tackle.

And when quarterbacks do dare to throw his way, he’s capable of making a play on the ball. Ignore the fact he seems to rip the receiver’s helmet off in the GIF below. Focus on Williams’ ability to time the jump and high point the ball, playing through the receiver’s hands, and breaking the pass up.

Screenshot of the play to help show it. He jams his right arm in-between the receiver’s hands, never giving him an opportunity to make the grab. For as tough as it is for corners to play some of those red zone fades, this is great tape. 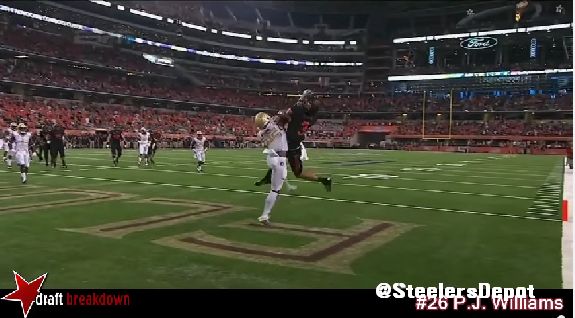 His physical nature in the pass game has rubbed off against the run. Big hitter for the position and doesn’t duck out of contact. His 74 tackles in 2014 reflect that.

Recognizes this tight end screen on third and four. Closes and sticks the receiver, taking him to the ground, and getting his defense off the field.

Another big play versus Oklahoma State. Up ends the quarterback and forces a fumble. 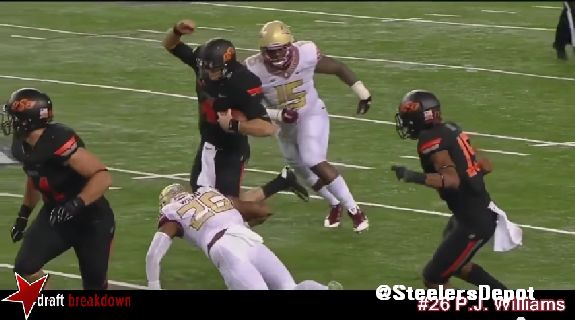 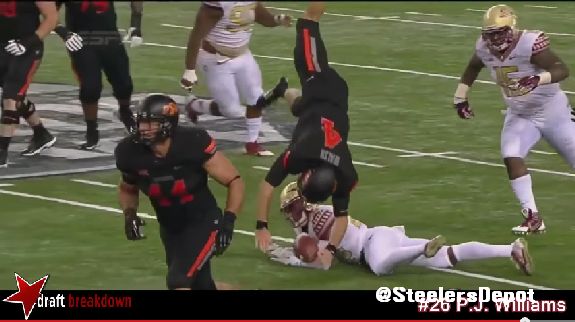 The biggest negative I highlighted were issues with his punch. For a corner who will be tabbed as a press corner, it’s obviously a significant issue.

This keeps your hips open as a cornerback. Visualize it. If you punch with your outside hand against an outside release, your hips don’t open. When the receiver breaks through, the cornerback is beat.

Repeated examples of it throughout the four games I watched.

Working against DeVante Parker, one of the best receivers in this year’s draft class. Lunges and tries to press with his outside hand against an outside release. 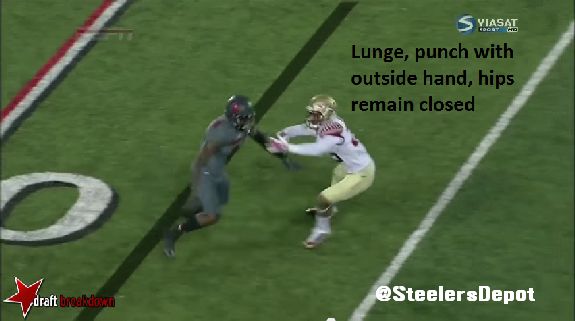 Same issue here against the Cowboys. See how his hips are closed. 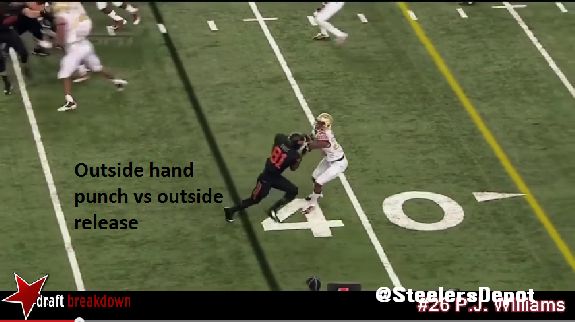 I do admire Williams’ ability to recover, play to the hip, and still make a play on the ball when he loses off the line. Beat off the line below. 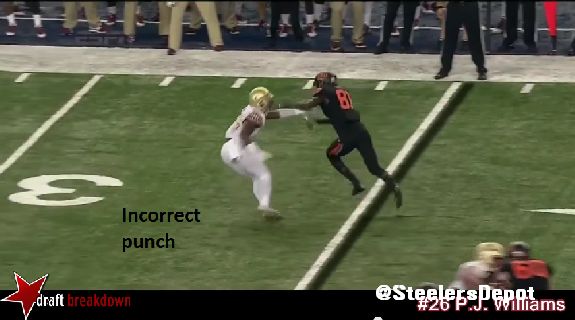 That lets the receiver gain a step of separation. 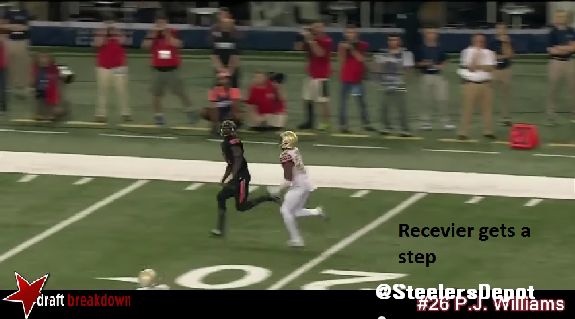 But Williams doesn’t look back to the ball like so many corners who are out of phase, plays the pocket of the receiver, and creates the breakup in the end zone. 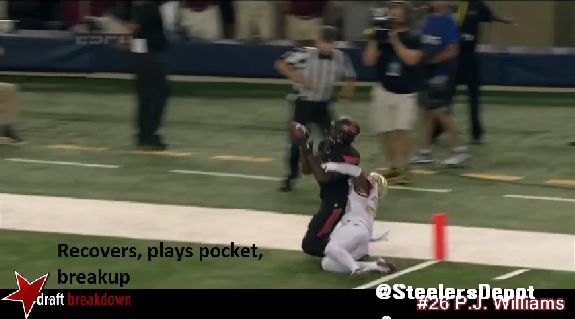 Though I noted his over aggression at times, the scheme could play a role, too. Two high shells allows the corner play “trail” technique, playing to the inside hip with safety help over the top. There were moments where it appeared Williams was beat but he had the safety’s coverage.

He’s a physical corner who will support the run. But I would like to see him refine his technique as a tackler, especially for a Steelers’ team that places such an emphasis on it.

Comes off free on this blitz with the chance to drop the back for a sizeable loss. But he can’t finish. 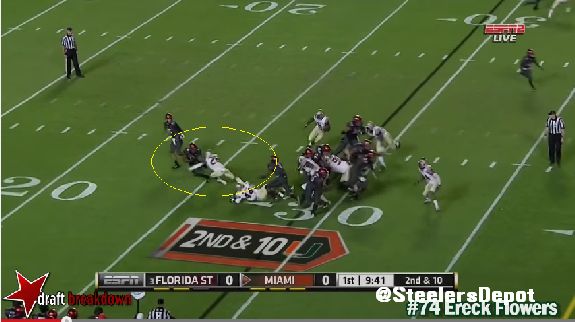 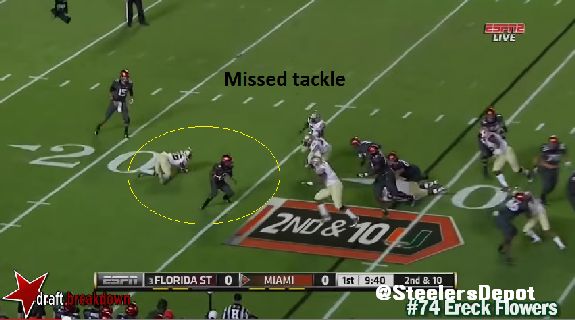 Again matched up against Parker. Allows separation, goes too high on the initial tackle, and then fails to rip the football out before sprawling to the ground.

It’s not nearly as sexy to discuss but I was happy to see him used, and do well, in zone and off coverage. Played a lot of bail technique with single high looks.

It’s notably different than someone like Darqueze Dennard last year. He was cut from the same cloth as Williams – a physical, press corner. But I knocked Dennard because he didn’t look nearly as comfortable in off coverage. Williams could succeed in either scheme and that makes him more attractive to a team like the Steelers. Especially from an outsiders view when we’re not sure exactly what the Steelers’ scheme will be in 2015.

Like a lot of the underclassmen, his issues are in part due to a lack of experience. I’m weary his punch has become a bad habit that will be difficult to break, but once he gets deep in practice, he’ll understand the need to quit cold turkey.

Evaluating talent in the draft is usually relative. That makes some of my early evaluations a bit more fluid because I only have a few players “scouted” (watching Youtube videos in mom’s basement).

But when you think of a corner, Williams sure looks to have all the tools. If the Steelers do decide to buck the trend of avoiding taking corners early, and want to infuse a little more physicality in the passing game, he’s a logical choice.

Games Watched: at Oklahoma St, vs Clemson, at Louisville, at Miami (FL)