We’ll look at another running back today. One I like a little bit more than the last one we profiled. Minnesota’s David Cobb.

– Well-rounded back who offers some of everything

– Shows pop, explosion in the hole

– Vision, can find the lane, press the hole

– Has agility and wiggle, can make something out of nothing, keep plays alive

– Some strength and power to his game, has leg drive to churn out YAC

– Requires “hat tackling,” multiple defenders to bring him down

– Maybe not an elite trait to his game

– Wiling but below average pass protector, struggles to stick

For a guy that’s 220 pounds, he’s got impressive pop. With his vision, he finds the hole and hits it with conviction.

And when there’s nothing available, he’s able to create his own space. Has short-area quickness that lets him make something out of nothing.

After realizing he couldn’t hit the edge, Cobb plants upfield, runs through a couple tacklers, and finishes the run dragging defenders.

You might have to watch this GIFs a few times to really appreciate it but watch Cobb run over the linebacker (#30) and drag another defender to get out of his own end zone. It’s one of those runs that doesn’t show up on the box score but is definitely appreciated.

I made up the term “hat tackling,” in my report because it describes him so well. Requires multiple tacklers to wrestle him to the ground.

Shows wiggle in space. This GIF below really capsulizes the player Cobb is. Runs through the linebacker in the alley, gets into the open field, makes the safety miss in space, and scores.

Shows something as a receiver, too. Clean catcher who is “quick to the tuck,” meaning he gets upfield in a hurry.

On the negative, he can’t be trusted as a pass protector. He’s willing, knowing that’s how you stay on the field as a back, but the results aren’t pretty. Or effective.

Squares up in the example below but is on his heels and the defender pushes through with ease.

Terrible showing here, getting shoved out of the way and allowing a sack in the bowl game against Missouri.

I didn’t start to notice it until the Missouri game but he gets a little loose with the football, especially as he starts to dance around and change direction. Carries it away from his body. 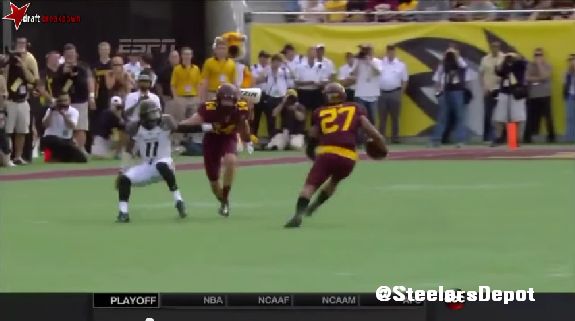 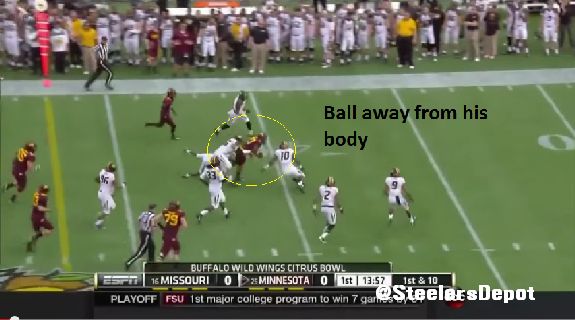 And there isn’t that “elite” trait other backs possess. Nothing immediately comes to mind when you think of Cobb.

It’s a sexy running back class. Melvin Gordon, the Wisconsin record-setter. Todd Gurley, the controversial running back but arguably the most talented runner in this class. T.J. Yeldon, a catalyst on a great Alabama team.

David Cobb is not one of those players. He doesn’t effuse that unique quality those others do. But he’s a do-all player who gives you a little bit of everything.

It’s for those reasons that I walk away a fan of Cobb. And he’s got a lot better value than some of the other aforementioned backs in this class. Not flashy but solid and overall, impressive.

His passing rushing chops need work and that could limit his use in his rookie year. But he’s still effective as a two-down back.

If the Steelers are looking to develop a capable number two back, and maybe invest in it a round or two higher than most expect, Cobb would be an excellent option. He’s shaping up to be one of the underrated players of this year’s draft.

Games Watched: at Michigan, at Nebraska, at Wisconsin, vs Missouri (Bowl)