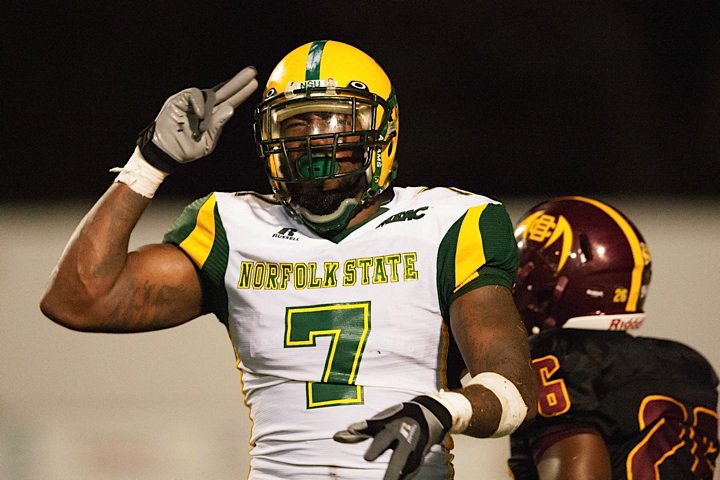 The measurables on Trail are enough to get any football fan excited and there’s been an enormous amount of buzz surrounding the Florida native since his invite to the Senior Bowl. There was only one full game of his available to watch (against Bethune-Cookman) so the sample size is small. Unfortunately, the tape I was able to watch shows a player who still needs a lot of work and has some serious question marks.

On this play, Trail takes a bad angle in pursuing the quarterback, gets a step behind, and fails to complete an arm tackle. Not what you want to see from a guy with his length and speed.

Trail does a decent job here reading the play but can’t bring his man down and it ends up being a gang tackle. A guy like Jeremy Hill is going to make him look silly at the next level if he tries tackling like that.

He’s got his hand in the dirt on this play. Fails to recognize the ball carrier on the read option and tackles the running back.

Trail is late getting off his block and seeing where the run is going. He ends up tackling his own teammate.

Trail gets to the ball carrier but just gets an arm on him high and doesn’t wrap him up.

Probably my favorite play by Trail from the whole game. He flushes the QB out of the pocket and forces an errant throw. Good hand use and pressure inside.

On this play, Trail lines up as an interior defensive lineman. He gets penetration and wraps up the ballcarrier before he can get started. Great example of his versatility in sub packages.

Some in the media have dubbed Trail as a probable top 90 pick but I just don’t see it. He has the size, length and athleticism to play in a 3-4, a 4-3 or a hybrid front at the next level. His ability to drop and cover makes him valuable but he’s got some holes in his game that need to be addressed.

In fairness to Trail, as a prospect, I’ve seen other games of his live on TV where he performed much better than the one against Bethune-Cookman (especially when the Spartans took on Rutgers and William & Mary). But his shortcomings in run defense and converting speed to power were always evident. He needs to dip the edge better when rushing the passer; easier said than done for a player measuring in so tall.

I don’t quite view him as the tantalizing prospect that some scouts do but I’m still intrigued by his physical measurements and athleticism. Any team that drafts Trail is likely not getting a day one starter but you could line him up all over the place in several sub packages.

Projection: Early 4th to late 5th round (Hard to see teams letting him fall to the 6th when there are only so many guys of his size and ability walking the planet)