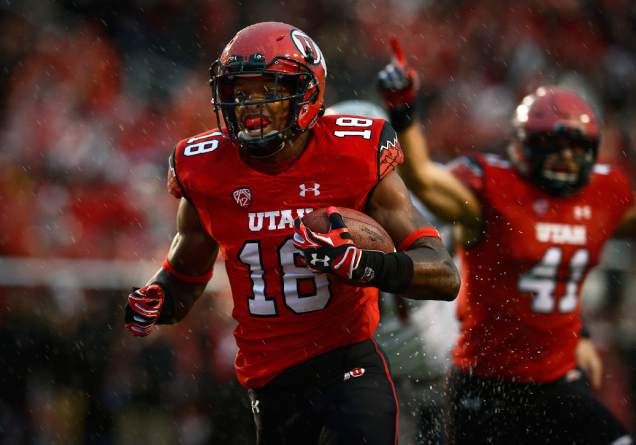 To kick off the week, a breakdown of our fourth cornerback. Utah’s Eric Rowe.

– Excellent size with long arms (32 1/2 inches)
– Elite when the ball is in the air
– Capable of playing the pocket, strong hands to swipe through the catch point
– Vertical and ability to high point the football
– Takes good angles to the football in the passing game
– Strength/length to press at the line
– Position versatile, former safety and started at three positions in his career
– Room to refine his game, still new to the position
– As much starting experience as you can ask for
– Special teams work, even in senior year, work on both punt units
– Fairly productive career

– Cornerback may not be best fit, arguably should return to playing safety
– Questionable speed, average at best
– Underwhelming explosion out of his pedal
– Tight in his turn, tends to pop up as he flips his hips
– Not a major factor against the run
– Will show trouble sinking his hips and driving through tackles, leading to misses
– Small injury concerns

Rowe is a former safety and those skills definitely translate to corner. He didn’t intercept many passes in his Utes’ career, just three, but the guy plays the pocket as well as you can hope for at the position.

There were examples in all four games I watched. Against Michigan.

And here again, high-pointing the football and swiping it away. 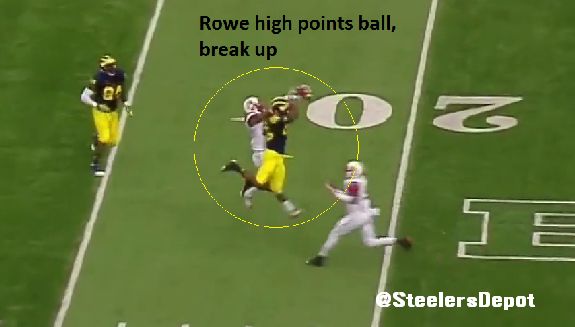 A breakup, interception, and touchdown early in the game against Washington St.

Shows a vertical and ability to high point the ball to break this throw up against UCLA.

And this is a terrific play by Rowe. Good angle to the ball, gets his hand into the receiver’s chest, and drags the receiver’s right hand down so he can’t attempt to make the catch again. When we talk about “playing the pocket,” this is exactly what we mean.

Still of the play. 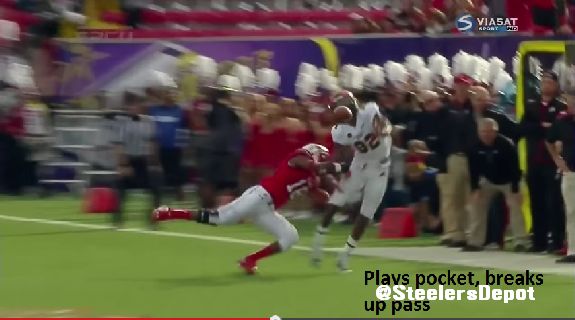 Rowe is clearly at his best with the ball in the air. It’s everything else that is concerning.

His biggest issue is a lack of speed. It’s fair to wonder whether it’s going to be good enough for the position. His biography says he was once timed running a 4.39 in the 40 but that doesn’t show up on tape. Watch him get beat vertically against UCLA for a long touchdown at the end of the game.

Questionable explosion out of his breaks. It’s average for the position. It is tough to grade him in his first year at the position – something we’ll expand on later – but Rowe looks too stiff to play corner. And he’ll pop up on his turn. Tough for those taller corners to be fluid and stay low.

Can best be seen in this GIF below. Rowe falls out of frame pretty quickly but you can see it.

Not particularly impactful against the run and will miss too many tackles. Not terrible but definitely not reliable, either. Whiffs against WSU.

As I alluded to, Rowe isn’t the easiest player to grade. It’s his first year at cornerback after three at safety. Brand new to the position – maybe he gets better. You don’t know how finished of a product he really is. There were times on tape where you could obviously see him blow a coverage. Rowe was learning as the year went along, I’m sure.

However, it feels pretty clear he’d be best served moving back to free safety. Utah shifted him only because cornerback became bare following Keith McGill’s graduation. With his ball skills but lack of range and average ability against the run, I’d put him in center field and let him read the quarterback.

It would be surprising to see the Steelers’ take a safety within the first three rounds. Shamarko Thomas will get his chance and odds are strong Will Allen will return. He wants to play another season and Mike Tomlin loves him.

But it is reasonable to believe they will take one at some point in the draft. Troy Polamalu may retire and the team could live without Robert Golden.

If Rowe lasts until the fourth or fifth round, and if current pre-draft projections are to be believed, he’ll be there, the selection makes more sense. It was a safety tandem that didn’t make many splash plays with the ball in the air in 2014. The only team that didn’t get an interception from the position.

The NFL Draft is an art, an inexact process. But one thing that you can be reasonably certain is that Rowe will be a playmaker. Something the Steelers could stand to use.

Games Watched: at Michigan, vs Washington St, at UCLA, vs Colorado St (Bowl)