Back looking at the cornerback position today. And one of its top prospects, Michigan State cornerback Trae Waynes.

– Lanky, slender frame without much bulk
– Lacks strength, outmuscled by wide receivers, easily bumped and knocked off balance
– Has trouble getting off blocks
– Doesn’t always wrap up, misses more tacklers than you’d like
– Not always involved in the run game

I don’t remember the player’s name but I once read a story on a group of coaches who were watching tape on an athlete. At first glance, he looked like a lazy player, who didn’t seem to be playing full speed. But in person, they realized he wasn’t lazy. He was a tremendous athlete whose movement just looked effortless.

That story reminds me of Trae Waynes. While he may not have that 4.35 speed he had before his leg injury, it’s still excellent. His play is the epitome of the word “smooth.”

In my notes over the four games I watched, I wrote the phrase “in-phase” four times. With his ability to turn and run, he’s able to stick to the inside hip of his receiver, blanketing and pinning him to the sideline.

Plays near the LOS in island coverage, doesn’t bite on the double-move, flips his hips, gets a little physical, turns his head around, and the pass falls incomplete.

Same thing here. Inside shade and knocks the receiver out of bounds, taking him out of the play. Waynes is at the top of the screen.

For his size, he shows terrific bend, no doubt helped by his track background. Look at his stance as he starts his pedal below. Knees bent, butt down, ready to flip his hips and explode on his turn. 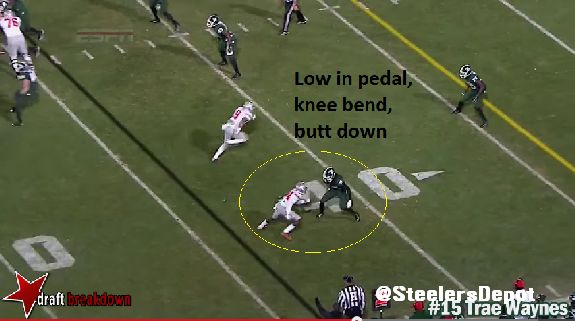 Waynes isn’t contact shy, he moved to be the boundary corner in 2014, but his frame holds him back. Misses some tackles and will never be known as a tough cornerback the way a guy like William Gay is.

Last line of defense and misses the back, opting to try and cut him low. Fails and the runner breaks off a huge gain.

Has difficulty working off the stalk block of the wide receiver on this bubble screen.

He makes it easy to remember he’s barely 180 pounds.

I mentioned on The Terrible Podcast the Steelers’ offseason will be very telling of any philosophical shift they have in the cornerback position. It’s been about physical players who close well and are capable of tackling the catch. Less of an emphasis on speed and play-making ability.

Because of the need at the position and a new defensive coordinator, Waynes could be the bridge in that change. A little less physical but a better cover corner who can generate big plays. Not saying that’s good or bad, right or wrong, just that it’s a possibility.

And in a scheme less dependent on stopping the run, he will be a tremendous fit. There’s good reason to believe he will be the first corner off the board.

Games Watched: vs Nebraska, vs Ohio St, at Penn St, vs Baylor (Bowl)