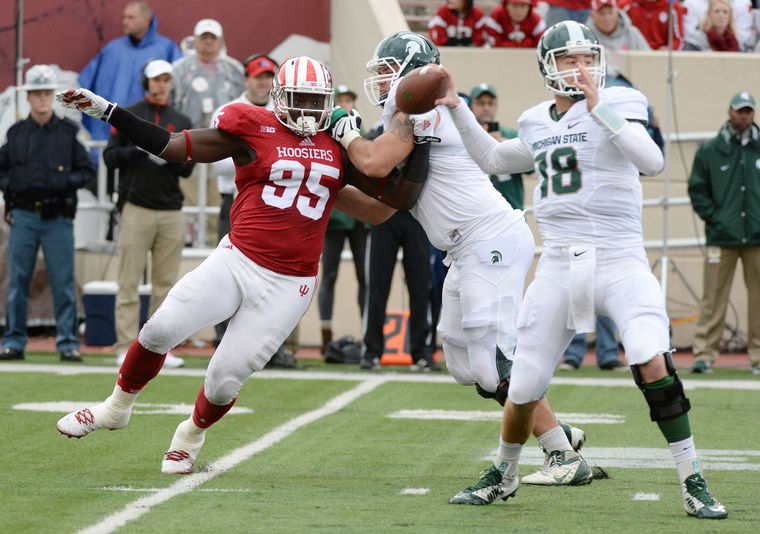 – Short for the position but has a sturdy frame, lot of muscle
– Looks bigger than his listed weight
– Above average upper body strength, holds the point of attack
– Decent movement skills for his size, respectable athlete
– Shows some active hand use against the run
– Good awareness, gets his hands up
– Scheme versatile
– Strong senior season
– Lots of starting experience

– Lacks typical height to play five tech in a 3-4
– Overall, ineffective pass rusher who gets stuck on his blocks
– Has to keep his pads low, plays too upright
– Bit of a tweener
– Upside, ceiling limited
– Not an impact player

I realized after the fact just how short Richardson was, making him a less than ideal height to play five tech. But it doesn’t completely preclude him. After all, Ziggy Hood was only 6’3.

And Richardson has the distinct advantage of playing in a 3-4 system. Indiana switched to an odd front after a horrendous defensive performance the year before. He moved from defensive tackle to right end. While tape is limited, Indiana appeared to play a one-gap principled defense that involved a lot of slanting instead of taking on blocks. Different than what the Steelers play even if they are evolving into a one-gap scheme themselves.

Shows the ability to get off blocks in the run game. Lined up as the right end in the GIF below, he sheds the tackle to defend this cutback, wrapping up and bringing the runner to the ground.

Richardson shows strength to hold the point of attack, even against double-teams. Unfortunately, those are very difficult to show in GIFs or pictures from the TV tape. Without the All-22, it’s difficult to convey it well. Why checking out the videos we link to is so important.

Quick hand use as a pass rusher to beat the left guard inside and get pressure.

But too often, he gets stuck as a pass rusher. Gets his body turned and has trouble shedding once the offensive lineman has engaged. Can result in him getting taken out of the play. As you’ll see below, Richardson winds up in the ground. He’s the LDT.

Even as a shorter defender, he struggles with leverage and has a tendency to get up righted in both phases of the game. 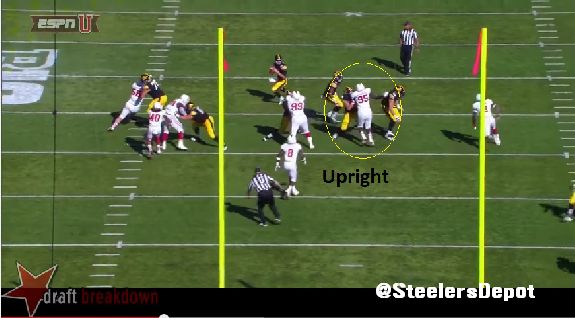 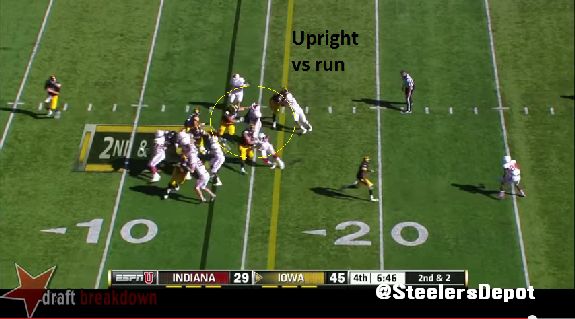 His 2014 campaign was certainly his best perhaps aided by the scheme and his own natural development. Of course, three of Richardson’s sacks came against FCS Indiana State.

Richardson’s ceiling seems pretty limited and in turn, caps his draft value. He’s a good run stuffer who has experience in an odd front but offers little as a pass rusher.

The Steelers’ starting defensive ends are clearly set. There’s zero debate Cameron Heyward and Stephon Tuitt will open the 2015 campaign as starters. But the team is missing that all-important third, rotational end who has to pick up 15-20 snaps while playing either end spot.

But picking a player who seems relatively “maxed out” is usually poor practice. The kind of guy that hangs around the roster for two years before finally falling out of the league. Richardson’s value seems to make sense, he will probably last until Day Three, but I don’t get particularly excited about this prospect.