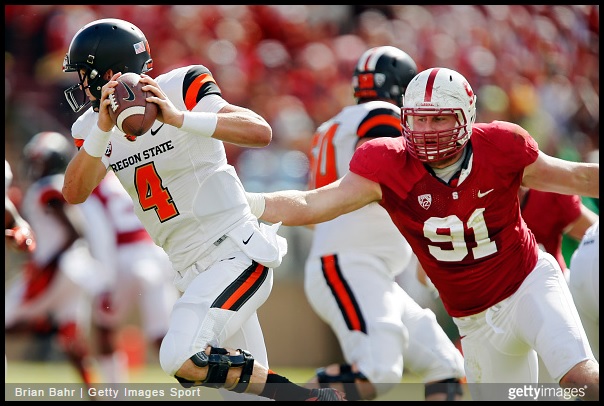 – Excellent height/weight for a five tech
– Solid upper body strength
– Better first step than you’d expect
– High motor, runs to the ball
– Works hard at getting his arms extended
– Shows some ability to collapse the pocket
– Potential to be a respectable two-gapper
– Shows good pad level and proper hand placement for his size
– Active hands, even if it isn’t always effective
– Experience in an odd front
– Versatile, played all over the line
– Productive 2014 campaign
– Three-year starter

– Unusually short arms given his height (32 3/4 inch arms)
– Stiff athlete, can’t turn the edge
– Too often gets locked up as a pass rusher
– Must consistently stay square to the LOS
– Lack of length can make it difficult for him to shed against the run
– Some injury concerns
– Older than you’d like

In Pittsburgh, he’ll be endlessly compared to former Cardinal and camp favorite Josh Mauro. I don’t get too wrapped up in those comparisons, preferring to judge the player standing alone, but Anderson is a better prospect. And he started over Mauro in 2013.

There were actually rumblings that Anderson could declare early at the end of the 2013 season. But after suffering a knee injury vs Army, it made sense for him to return to school as a fifth year senior. That does make him older, turning 24 in early August.

Though I admit I was off in my evaluation of Mauro – initially giving him a ten percent chance to make the 53 – Anderson is a better athlete than him. Don’t mistake that with being a great athlete, Anderson isn’t, but I like his first step off the line. He couples that with active hands to create penetration.

He’ll quickly gain John Mitchell’s approval, passing his prerequisite of needing to run to the football. Love Anderson’s hustle. Chases down this receiver screen across the field.

And tackles the receiver downfield.

When playing with proper technique, Anderson shows strength at the point of attack. Ability to hold and occasionally shed, as we’ll see in the photos below. 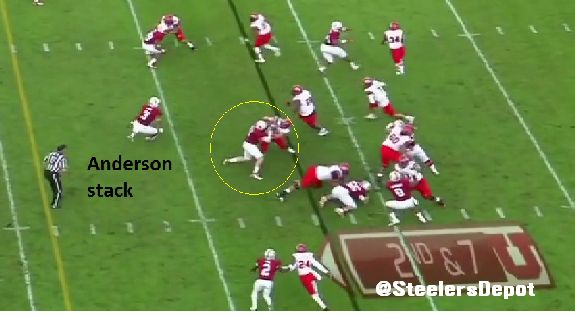 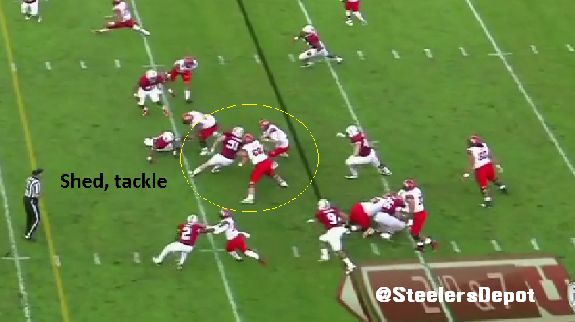 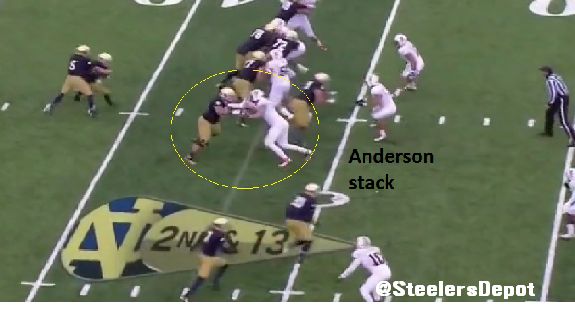 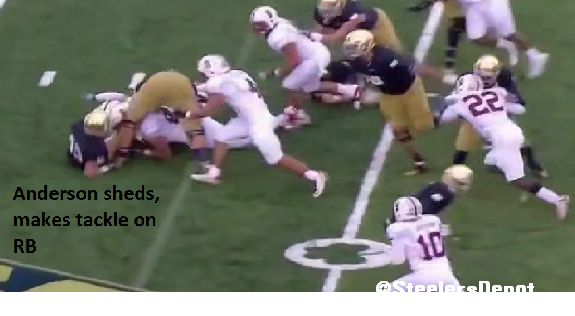 Anderson lined up all over the Cardinal’ defensive line. It’s their philosophy for their lineman to have experience playing everywhere. Most of his work came on the left side but he’s lined up at every technique on either side along their odd front.

Though he does work hard to hand fight, he still isn’t always an effective pass rusher and is clearly much better from the interior than the edge. He’s prone to getting locked up and his only moves are a bull rush and rarely, a rip.

Here he is fighting but ultimately can’t shed.

Working at left end, Anderson is stiff and shoved up the arc.

He must consistently stay square to the line of scrimmage. Too often turned out of the hole, taking him out of the play. 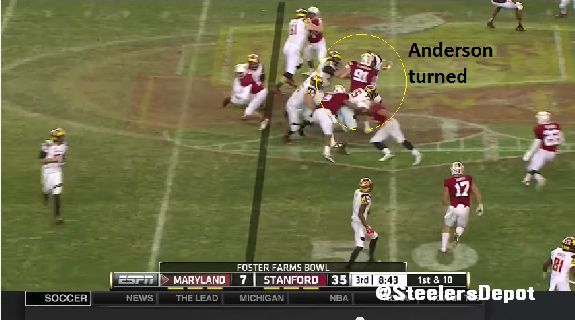 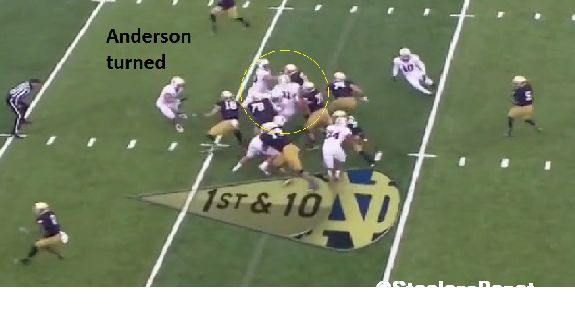 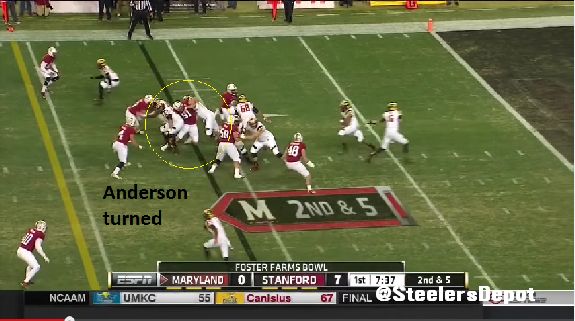 Although Mauro had similar length, Anderson won’t be picked up as a free agent. He’s going in the draft. And the Steelers look for better length at the position than what Anderson has. Cameron Heyward and Stephon Tuitt are both 34+ inches. Ditto with Cam Thomas. Nick Williams was in the same group with 34 1/4 inch arms.

He tries to combat that as much as he can but there are moments where he has trouble shedding and can be locked up.

I don’t think it immediately and completely precludes the Steelers from taking Anderson but it hurts those odds. It creates a dilemma. He checks off a couple boxes you look for in the position. But prototypically, isn’t fitting the mold.

It might take Anderson sliding a round or two later than expected for the team to actually take him. And that they’ll be inclined to look elsewhere first to find that crucial third defensive end.

Games Watched: at Notre Dame, vs Utah, vs Maryland (Bowl)