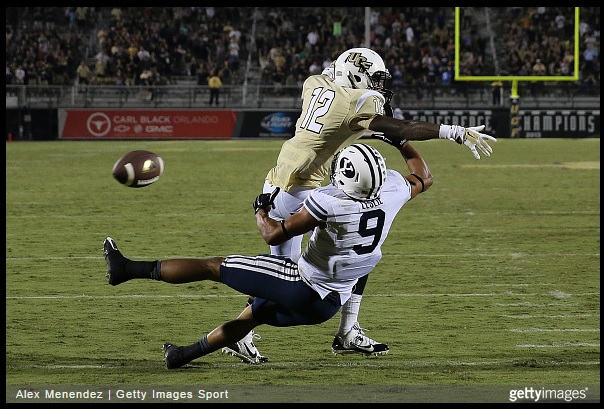 After looking at high profile corners throughout the season, we’ll look at a mid-round prospect. Central Florida’s Jacoby Glenn.

– NFL size with a little room to add to his frame, overall looks the part
– Appears to have above average length
– Ballhawk, playmaker in 2014
– Shows ability to be physical, hard hitter, packs a punch on his tackles
– Overall, reliable tackler when able to square up
– Quickness to his game, exhibits explosion out of his break and a quick turn when flipping his hips
– Plus closing speed
– Experience at both CB spots
– Productive 2014 season that earned him a lot of accolades

– Very tall in his pedal, does not sink his hips, consistently an issue and sticks out on tape
– Needs to be more active in run support
– Occasional missed tackles, especially when he can’t square up and drive
– May be playing out of control, causing him to get a little too reckless
– Footwork appears to be sloppy
– Inexperienced, left school early as a redshirt sophomore

– 25 career starts for the Knights
– 2014: 11 breakups, 7 INTs
– Tied 3rd in the NCAA in INTs
– Named AP 2nd Team All-American this year
– First defensive player from his school to be named an AP All-American since 1991
– 1st team All-AAC
– AAC Defensive Player of the year
– Received offers from Kentucky, Memphis, Mississippi St
– Decommitted from Kentucky to sign with UCF
– Wide receiver/safety in high school while playing some corner

A hat tip to reader Ike Evans for pointing Glenn out to me. Mentioned him in one of the comments and looking for a corner seemingly flying under the radar, I wanted to check him out. Like the report I did yesterday on Randall Evans, Glenn’s resume is highly impressive. As written, his seven interceptions earned him a trip to the AP All-American list.

It’s important to keep in mind how raw Glenn is. Two year player and still a redshirt sophomore. He should be evaluated in that scope and how much he can get better.

Glenn passes the eye test with the size, length, and speed for the position.

Ballhawk with those seven picks, showing why he was a wide receiver in high school. Steps in front of this vertical shot against Missouri and though we won’t show it all of the return, it was a healthy gain.

Shows the same against Christian Hackenberg and Penn State.

At moments, Glenn showed the willingness to be physical and be a reliable, open field tackler who can jolt his man. Again, against Penn State.

Glenn has one glaring issue that stuck out on nearly every snap of the three games I watched. Must get lower in his pedal. Way too tall and though he still shows a fluid turn, it’s unlikely he can get away with that on the professional stage. Too tall in his pedal. It was actually easy to identify him on TV tape because of how tall he looked.

We’ll show a GIF of it and then some still shots below. Glenn is the left corner in it.

You can see he isn’t that explosive out of his break here, either.

His stance starts out ok enough but as he backpedals, he seems to be playing on his heels and gradually pops up. 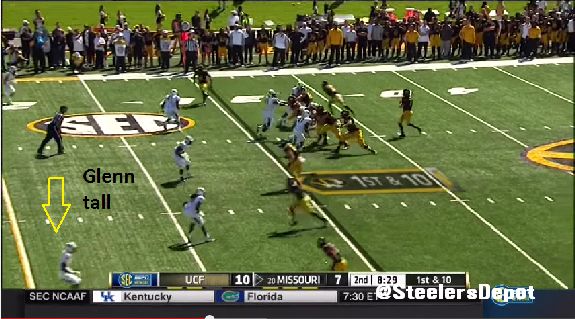 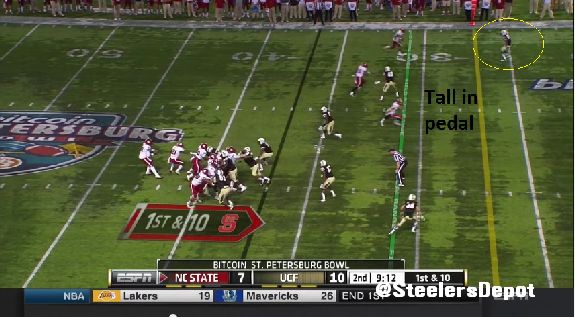 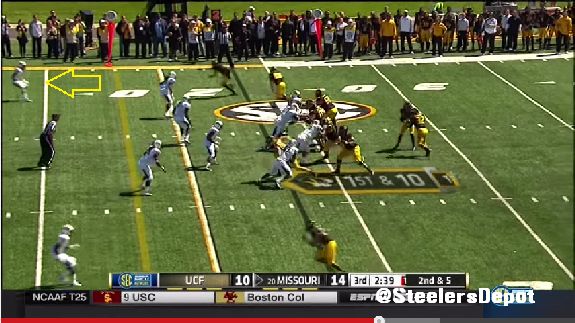 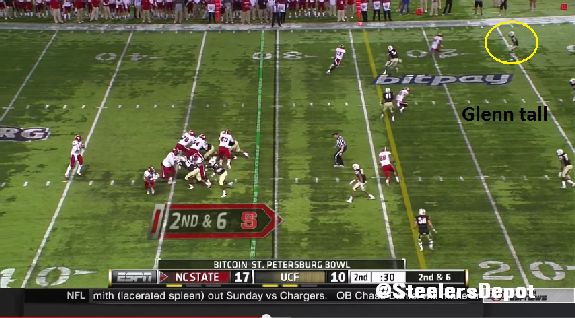 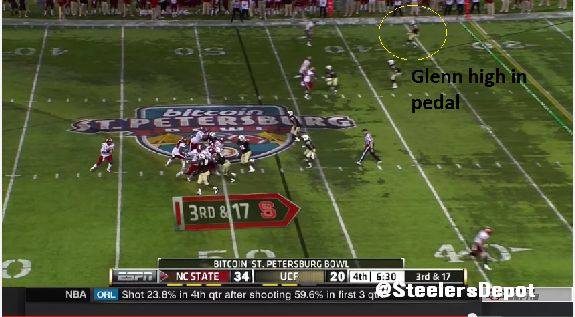 Tackling when he isn’t able to drive downhill and square up becomes an issue for him. Gets beat off the line late against Missouri, opening his hips the wrong way, put in trail position, and misses the tackle. Allows the receiver to score and the Tigers to take a key 21-10 lead. UCF would go onto lose, 38-10.

After initially hearing about him, I was under the impression Glenn could be a late round gem. But after poking around a couple popular ranking sites, it was a bit disappointing to hear him ranked higher, going anywhere from round two to four.

I see him as a later round alternative to Jalen Collins. Raw, with ball skills, but some technique issues. It’s too bad that alternative isn’t a five round gap instead of the two to three that it probably will wind up being.

And that makes him a little less appealing. I’m not sure how much he could contribute in his rookie year, outside of some work on STs. Ideally, you’re looking for an immediate secondary impact from any selection within the first three rounds.

Still wouldn’t mind the pick and as I mentioned on yesterday’s The Terrible Podcast, the Steelers still could wait a few more rounds than Steelers’ fans would like to take a corner. Historically, that’s their mantra.

If that is the case, a player like Glenn could be sitting near the top of his class come the mid-rounds. Someone worth keeping an eye on. Someone who is going to get better.

Games Watched: vs Penn St, at Missouri, vs NC State