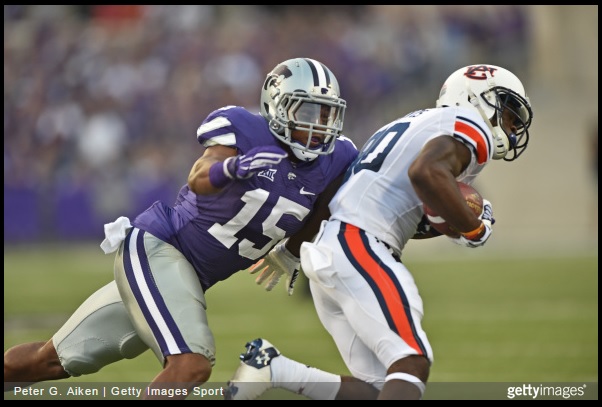 A late round cornerback prospect to kick off the week. Kansas State’s Randall Evans.

– NFL size and appears to have above average length
– Offers physicality at the line, willing to press
– Plus ball skills, at his best when the ball is in the air
– Tracks the ball well and takes proper angles
– Occasional flash of click and close ability
– Decent though not great tackler with a hint of physicality as a tackler
– Slot capable, his main position in 2014
– Lots of starting experience
– Offers versatility
– Appears to be high character
– High accolades in 2014

– Questionable long speed, must play in a zone scheme
– Not aggressive enough to the runner, breaks down too easily and gets caught flat-footed
– Causes him to miss too many tackles
– Not as physical as you’d like against the run
– Lacking some upper body strength that lets WRs stick him on stalk blocks
– Disappears for long stretches of the game
– Overall, average explosion
– Average turn out of his pedal
– Did not see him get work as an outside corner

Wanting to mix things up a little bit, I hunted around for some intriguing late round corners. Remember, the Steelers taking a corner high would mean bucking a hefty trend that says they’ll wait until the mid-rounds.

And Evans has a resume that made me want to see him in action. From an unknown walk on out of Miami, Florida to a 31 game starter who was voted as a first-team conference selection by his coaches in 2014. Quite the turnaround.

Evans was voted over players like TCU’s Kevin White and Texas’ Quandre Diggs, both of whom are going to go before Evans. Type of profile that perks you up a little bit.

He shows above average ball skills. Break, angle, and diving INT in the end zone versus Baylor’s Bryce Petty.

Same game. Shows ability to track the ball in the air and uses his length to get enough of the ball to force the incompletion. 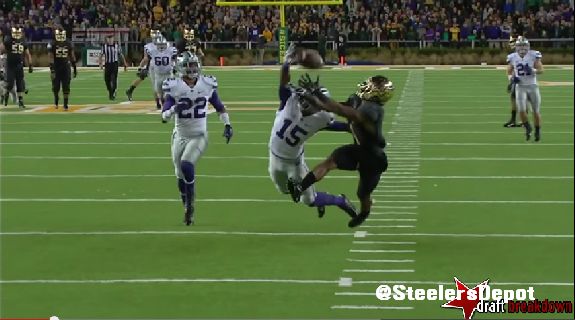 He had a similar looking interception, diving in front of a pass in a tight victory against Iowa St.

It’s rare but Evans had moments of being able to stick the receiver and drive him into the ground. It’s something I’d wish to see much more often but shown just enough to make it worth pointing out.

He is wearing #27 in this game, a tribute to teammate David Garrett, who was shot and killed during the season. Classy move and you’d have to think speaks to Evans’ high character.

As noted, Evans was a walk on player at KSU. Willing to do anything, he wound up playing all over the field. Cornerback, safety, working on the punt return unit, there are few areas of the field that are foreign to Evans.

In 2014, he would up being the starting nickel back, often playing to the field side. In the four games I watched, I didn’t see him take a snap on the outside. He ended up playing a hybrid DB/LB role, lining up near the LOS and being an active participant against the run. It’s a big reason why he racked up so many tackles, finishing his career as the team’s active tackle leader. 64 in 2014.

For a lowly touted prospect, that versatility is critical.

Unfortunately, he lacks a lot of basic requisites to survive in this league. The speed isn’t there. He wasn’t invited to the Combine, meaning his true 40 time will be tough to gauge – Pro Days are notorious for their generous times – but he’s not going to run well. 4.55+ guy.

This became most evident against Auburn. Evans was burned twice deep, exposed by the Tigers’ speedy. Evans could no longer play the hook zones he was accustomed to. Couldn’t carry receivers vertically downfield.

He’s bailed out by this drop from Sammie Coates. But beat nonetheless.

And another miracle drop here.

I wish his aggressive mentality with the ball in the air would carry over to attacking a runner or receiver already with the ball. Would like to see him more aggressive and he’s too quick to break down, get himself flat-footed, and miss.

Needs to keep driving downhill and really attack this receiver. Generate that explosion and power that will allow him to make the tackle. Instead, he’s hesitant, flat-footed, and winds up missing.

Maybe it was because I was watching full games instead of the usual cut-ups. Or that one of those games involved watching a Texas offense that was as exciting as a tectonic shift. But even as a player who often spent his time near the LOS, Evans disappeared for long stretches. Just typically failed to make any sort of consistent impact, flashing once a game before hiding the rest.

It goes without much detail but I’ve become less excited about his prospects after putting on the tape. To stand a chance, he’s likely going to have to move to safety and help hide his speed and explosion woes. It’ll hide his weaknesses and play on his ball skills.

I like his character, drive, and ability to make plays on the football. It gives him a glimmer of hope at the next level. But those odds are slim and Evans is going to need a repeat performance of what he’s done with the Wildcats. Only it’s going to be even harder in the NFL.

Games Watched: vs Auburn, at Oklahoma, vs Texas, at Baylor (passes only)