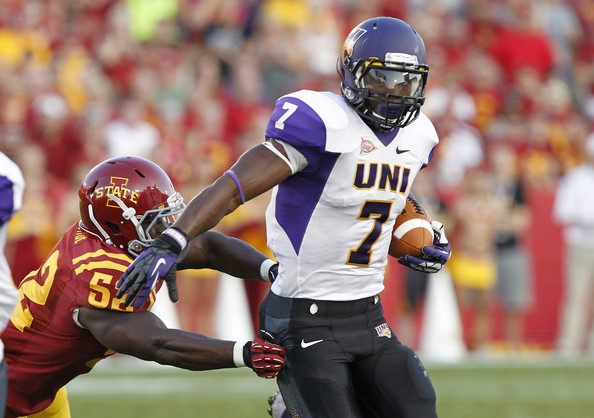 Today, a running back that has recently turned heads. Small school kid but lots of talent. Northern Iowa’s David Johnson.

– Unusually tall for the position
– Pad level is too high, way too much surface area to be hit
– Doesn’t show particular power between the tackles, not a tough runner
– Doesn’t offer anything special in pass protection
– Future fit at the position?
– Coming from the FCS level

It’s hard not to fall in love with David Johnson. Wherever he plays at the next level, he’s going to be a threat. Even if it was at the school level, there was a level of statistical domination that is rare to see.

And it wasn’t just the FCS level he had success against. Rushed for the first touchdown in this year’s Senior Bowl. He rakced up 58% of Northern Iowa’s offense in a close loss to Iowa, including a whopping 203 yards receiving. In 2013, he rushed for 199 yards and totalted nearly 250 all-purpose in an upset of Iowa State. Go back a year farther and you’ll find Johnson racking up two touchdowns and 107 yards receiving in a six point loss to Wisconsin.

There have been some obvious comparisons to Le’Veon Bell because of the size similarities. Similar heights and weights. But that’s not the way I view them as similar. These are two players who can still impact the game even with the running game taken away.

He rushed for 18 yards in that 2012 Wisconsin game. Against Iowa this year, he was held under 40 yards and didn’t have a carry bigger than eight yards. But he was still a main contributor and found the end zone in both games.

It’s been a discussion that has surrounded him since high school but Johnson’s best fit may come at wide receiver at the next level. I don’t question his talent – I question his position.

Watch how natural he looks as a receiver. Plucks this pass in the open field against Iowa, away from his body, makes a cut to the outside to avoid a defender, and nearly runs away from the final DB.

This type of play should dispel any notion Johnson can’t hang with top level competition. Releasing out of the backfield, he creates separation against the underneath linebacker, makes the grab, and shows breakaway speed in the open field into the end zone.

This was officially ruled incomplete but I don’t really care. Incredible one-handed grab that really highlights how good of a receiver Johnson is.

Still shot of it. 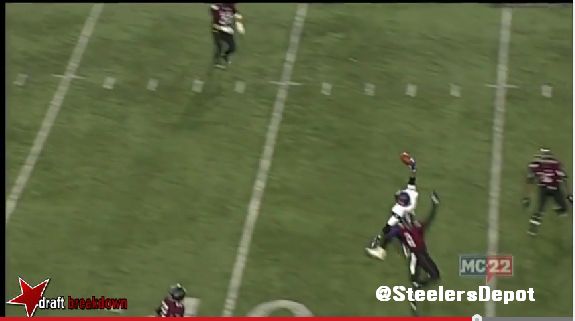 Even if the tackling from the safety is as shoddy as it gets, love to see his lower body strength to jump cut into the alley and hit the hole with conviction.

This athleticism goes back since high school when, as I noted, he was a three sport star. Here’s a basketball and football highlight video from 2009 set to the soundtrack of what I have to assume was his best friend’s playlist.

Although there are backs like Bell who have been effective playing above the six foot mark, Johnson doesn’t have near the same pad level or bulk as the Steelers’ starter.

Becomes an even bigger issue on the goal line when he can’t sink his pad level. Goes down easily in confined space. 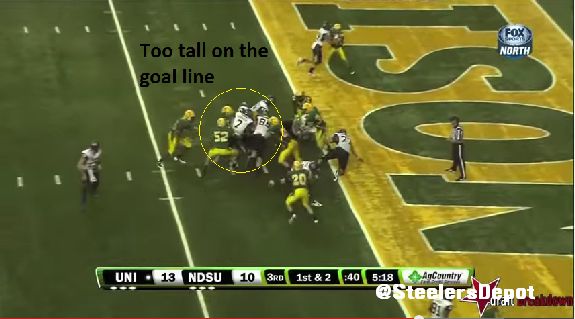 Even on his touchdown run in the Senior Bowl, you can see the high pad level. Too upright and way too much of his midsection exposed. Picture probably doesn’t do it justice. 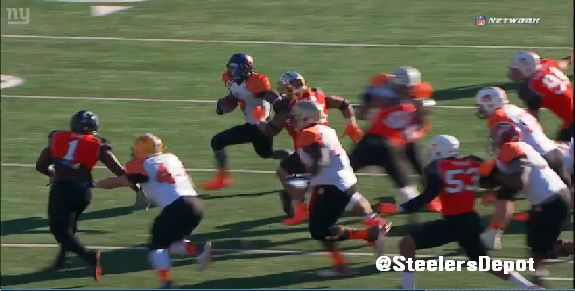 It’s tough to show in pictures or GIFs but I don’t consider Johnson to be a tough runner who hasn’t broken more than just arm tackles. Isn’t nearly as strong between the tackles as he is in open space.

His pass protection did improve from his 2013 to 2014 tape but it still isn’t anything great.

For those reasons, I would suggest making that switch from running back to receiver. Johnson himself admitted one of his top traits is his catching ability. But I wouldn’t be so naïve to ignore what he offers as a runner. A comparison is difficult to make but he could be used in a glorified Randall Cobb/Percy Harvin role. Different body types and not as fast but receivers who are active in the run game. Harvin had 52 carries in 2011.

That’s in-line of what I’d try to do with Johnson. A talent like that with his dual skillset shouldn’t be limited to one area. Coaches can get very creative with him. Use him over the entire field. Run the same plays with him out of different formations.

Northern Iowa hasn’t had a running back drafted since 1966. David Johnson is going to break that streak. And he’s going to do a lot more than that.