– Poor run defender
– Misses far too many tackles
– Poor technique, goes too high and doesn’t wrap up
– Too focused on interceptions, takes him out of plays
– Doesn’t rally downhill as quickly as he should, prone to getting flat-footed
– Takes poor angles in the run game
– Questionable effort and motor
– Lacks impact plays when he isn’t able to intercept passes
– Limited starting experience
– Some injury concerns, potentially lingering ones

No matter how they happened, fourteen interceptions in a single-season is an amazing accomplishment. Holliman uses his size, awareness, and ability to high point the football to always be around the ball. Some of his picks were relatively easy but they’re still game-changing plays. Two interceptions vs Florida State and three against Boston College. And he should’ve had four against them, dropping a pass late in the game.

He fumbled this pick away at the end of this one but shows the ability to find and high point the ball, picking off Jameis Winston.

Good awareness to get his head around and immediately pick off this pass versus Boston College. Helps seal the win.

Unfortunately, it’s the only part of his game. Some have speculated his shoulder injury have led to his shoddy tackling, but regardless of the reason, the dude doesn’t tackle.

There are technique issues. Attempts are too high and it leads to him having trouble of bringing the runner down.

Gets flat footed and has trouble making the tackle. Misses Nick O’Leary. 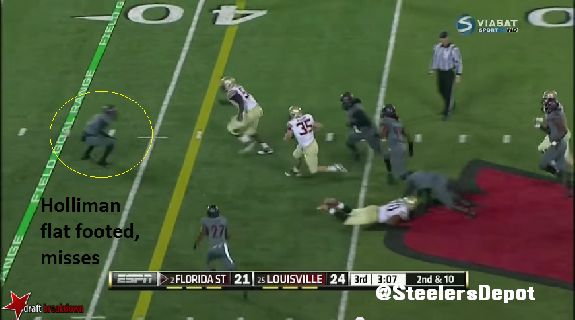 Brutal angle downhill, missing the back, and helping to give up a long touchdown.

Or just flat out failing to wrap up, opting to hope the receiver is shoved out of bounds.

The shoulder injury happened two years ago. If he can pick off 14 passes, he can tackle. It’s not an excuse. And even if it is a valid one, I’m not interested in selecting a player who is still suffering from an injury that is clearly effecting a big facet of his game.

His focus around interceptions seems to alter his mentality at times with the ball in the air, too. More focused on the INT than he is driving on the ball and challenging the catch point.

This is a nice snag by the receiver but it’s a bold assumption by Holliman. Doesn’t play the route, just hopes for the pick. That’s not going to fly in the NFL. Those receivers make difficult catches look routine. Needs to be aggressive, drive on the route, and treat an interception as a bonus.

See it in the screenshot below, too. 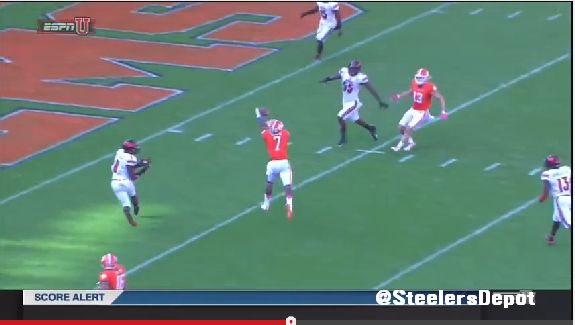 I could potentially forgive all of that if it wasn’t for moments like this one against BC. This is clear-cut poor and downright lazy effort. A light jog against a 237 pound, slow-footed WR who nearly takes this one to the house. Unacceptable and the type of play that gets you benched, regardless of the INTs you record.

Even if the Steelers decide to shift their philosophy of what they look for in the secondary, Holliman’s tackling skills wouldn’t mesh in the most lenient of schemes. It’s some Asante Samuel level incompetence. Deion Sanders looks like Night Train Lane compared to this prospect.

If I’m Mike Tomlin, this is a guy who isn’t even on my draft board.

Games Watched: at Clemson, vs Florida State, vs Boston College