We’ll dive back into more Steelers-centered prospects on Monday. But we’ll check out our first player along the offensive trenches. Louisville guard John Miller.

– Average frame but shows decent length for his height (33 inch arms)
– Extremely technically sound
– Upper/lower body work in sync
– Gives him proper base in run game, keeps lower half under him, generates strength
– Gets a great push in the run game
– Plays with proper leverage and hand placement, allowing him to stick to his blocks
– Keeps feet/legs pumping, able to slide laterally and capable of mirroring
– Tremendous anchor in pass protection
– Works hard to get his arms extended in both phases
– Quick feet and shows a pop off the snap
– Shows intelligence, picks up stunts/blitzes with ease
– Extensive experience at both guard spots
– Fantastic starting experience

– Average build, nothing to get excited about
– Has trouble engaging and sticking at the 2nd level, doesn’t always get feet under him either
– Sometimes looks lost in space
– Limited upside, frame and ability may be maxed out
– Minor injury concerns

Miller is the first guard I’ve broken down but has quickly became one of my favorites of all the players I’ve watched. There aren’t many flaws to his game.

He does a fantastic job of maintaining his base. Lower and upper half are in synch. He doesn’t lunge, always keeping his legs under him. Creates the knee bend you’re looking for and a powerful base to generate power from.

In pass protection, it allows him to anchor and absorb bull rushes as well as you could hope for. Couple that with his arm extension, and Miller should be textbook tape of how to “catch” defenders.

This 245 pound linebacker times the snap and hits the line at full speed. Miller, the right guard, calmly stymies the rush and then sticks with him the rest of the way.

His leverage, arm extension, and hand placement in the run game allows him to stick to his blockers. And with his lower half under him, he’s able to generate tremendous power. Strength isn’t just about who is in the weight room the most. Strength is derived from the hips and lower half. Without that, you’re not going to hold your blocks. Miller’s technique allows him to do that, as we’ll see in the GIF below.

As the left guard here (Miller flipped during games throughout 2014), he gets his lower half under him and sticks to DT Eddie Goldman, one of the better DT prospects in this year’s draft, driving him out of the play.

Pancakes the linebacker to help spring the runner for a first down against Virginia. Miller is the right guard.

Miller shows quick feet and the ability to move laterally in pass protection once the defender has engaged. Mirrors while usually keeping his base.

Smoothly slides against the ultra-athletic Alvin Dupree off the left side.

His biggest issue, and it’s something he’s actually admitted to in interviews, is the ability to stick in space. He isn’t slow, quite the opposite, a solid athlete, but he tends to get a little out of control and can’t get his feet under him when working to the 2nd level.

Working at right guard, he’s able to make the block but just barely. Feet swing out from underneath him and he lunges. At the NFL, a linebacker will work through his block and plug the hole. 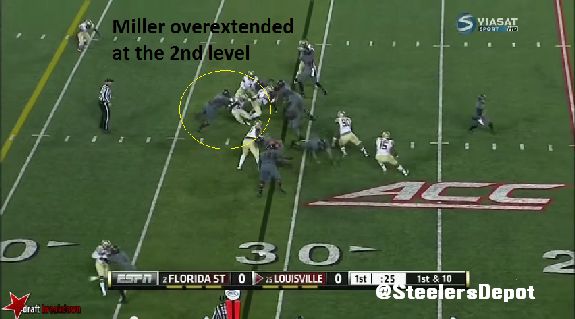 But for a guy who is otherwise technically sound, it’s something I figure could be improved on.

Most projections have Miller sitting in the third round but I wouldn’t be surprised if he went higher. Which is, frankly, disappointing, because I’d love for him to become a Steeler. The offensive line is far from a glaring need but Ramon Foster’s contract is up following the 2015 season.

Miller actually reminds me a little bit like Foster. Not an intimidating looking player, Miller is even shorter and lighter, but wins with his technique. But Miller is a slightly better athlete and a better trapping option than Foster.

Foster may get some criticism and it’s true he isn’t a star, but a comparison to him shouldn’t be considered a slight. A consistent lineman with few glaring negatives? Not easy to find. Rare to have starts across all five spots.

His ability to play both guard spots coming out of college is something that will also endear him to coaches. Especially Mike Tomlin. Miller is a guard who may never make an All-Pro list but could start for five years in this league.

Remember the Steelers decided to use a mid-round pick on the interior line in 2014 after drafting – and then losing – Wesley Johnson. It’s conceivable the team will go back to that well again at some point in 2015.

Games Watched: at Virginia, vs Florida St, vs Kentucky