Our first receiver scouting report of the year. He might not fit the Steelers but is one of the best prospects at his position. Alabama’s Amari Cooper.

– NFL body type
– Explosive, quick-twitch player
– Natural route runner, creates separation as well as anyone
– Shows explosion at the top of his route, gets out of his breaks quickly
– Top notch acceleration, quick to the tuck following the reception
– Tracks the ball well
– Flashes ability to leap and high point the football
– Playmaker, highly productive
– Incredible 2014 season

– Body catches too often, needs to get arms extended away from him more often
– More quick than fast, top end speed isn’t the best
– Lacks strength to run through defenders, has to make them miss
– Poor run blocker, has trouble sticking to his blocks
– Occasionally didn’t finish a route as well as he should have
– Drops a few more passes than you’d like to see
– Minor injury concerns

Obviously, the Steelers aren’t going to be in the mix for Cooper from a draft position and need standpoint. But throughout this process, we’ll be including some of the top prospects in order to make our draft talk as well-rounded as possible. It’ll be infrequent but expect reports on Jameis Winston, Marcus Mariota, and Leonard Williams before April’s draft.

Cooper enters the draft process as the consensus top receiver. And with good reason.

His explosion helps him in every facet of the game. A threat after the catch and the ability to win off the line. Quick feet aided by a strong lower body that lets him jab step to defeat press coverage off the line. Best example I could find in the three games I watched is shown in the GIF below.

And it’s that explosive nature that almost makes him feel a little Antonio Brown-esque. Crisp out of his breaks and he gains separation with ease. Master at stemming his route and truly puts his entire body into his fakes. In his monster day against Auburn, a comeback victory for the Crimson Tide that saw Cooper hit pay dirt thrice, he makes the Tigers’ safety look silly by selling the fake to the corner before stemming inside on the post. Easy six points.

Watch the use of the head fake, too. It’s those little details that makes Cooper’s route running special.

Inspired by former Steelers’ WR coach Scottie Montgomery, I’ve become hooked on using the phrase “quick to the tuck.” How quickly a receiver can put the ball away and get upfield after the reception. Cooper gets high marks for that. Little wasted motion and when he plucks the ball away from his body, he’s an immediate threat.

Shows a vertical and high points the football when the situation calls for it. 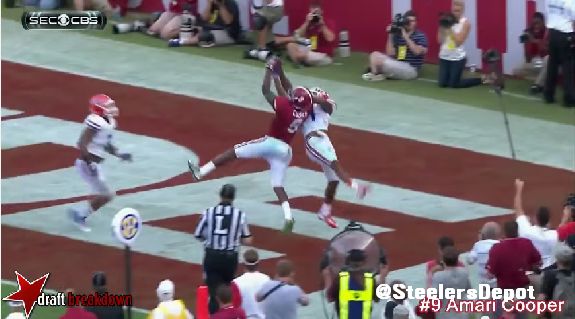 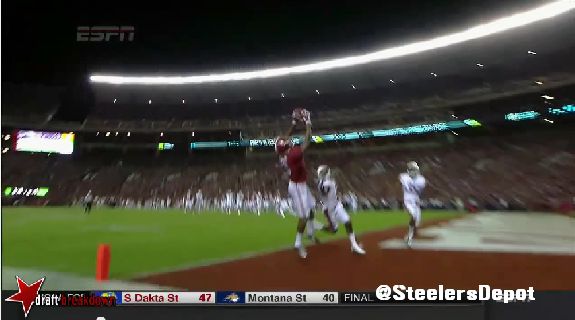 Over the three games I watched, Cooper let too many passes into his chest. Bit of a body catcher that is going to create more drops at the next level while hurting his ability to be quick to the tuck.

Best example I could find came in the Auburn game. It’s an uncontested catch but it’s a habit I don’t really like to see.

Despite his frame, he doesn’t offer much as a blocker. Fails to even seal the corner on this WR screen. Defender blows it up for a loss.

And it wasn’t much better in the run game, either.

Cooper does have speed but it isn’t blazing. Just throwing out a number but he’ll probably run in the mid 4.4’s at the Combine. Respectable but not a top number. His acceleration is much better than his top end speed. And that’s perfectly ok. But he might not be as dynamic the way Sammy Watkins was.

Obviously, it’s tough to rank a player when he’s the first one you’ve watched at the position. But Cooper has all the natural traits you look for in a receiver. The Alabama product has certainly set the bar high.

Games Watched: vs West Virginia, vs Florida, vs Auburn