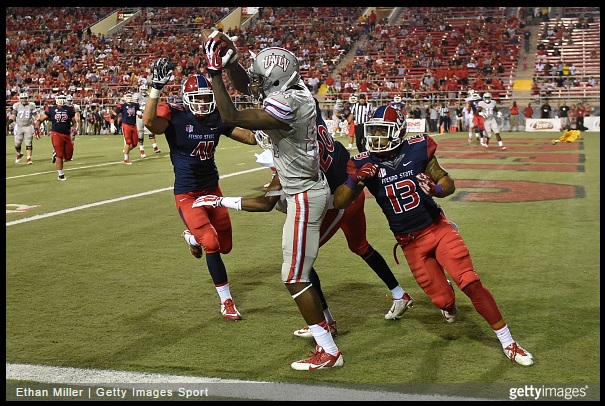 With a few early round safeties already broken down, today we have a safety who is valued to be a 2nd or 3rd day pick, and that is safety Derron Smith.

– All around has good speed to his game
– Has good, not great size
– Reads quarterback well, great vision/awareness
– Special teams contributor
– Good, not great open field tackler
– Ball hawk/playmaker
– Has good closing speed
– Great upside
– Plays run well in the box
– Is always around the ball, cleans up tackles
– Quick when blitzing, speed is above average

– Can add some upper body strength
– Takes poor angles
– Not as physical as you’d like
– Needs tackling form polished
– Not heavily involved in the running game
– On the shorter side, can’t match up well against tight ends
– Misses some easy tackles

– 2014: 77 tackles, 1 INT, 6 PD
– Missed Senior Bowl with sports hernia (played 2014 season with it)
– A first-team All-Mountain West
– 293 Total career tackles
– 15 Career interceptions
– Came into Fresno State weighing 173
– Played 55 games, started 43 of them
– Played in only three games his redshirt sophomore year due to broken arm
– In 2014 he was voted as the Mountain West Preseason Defensive Player of the Year for the second-straight season
– Outstanding track and field athlete in high school, one of the state’s top long jumpers
– Played safety, quarterback and punter in high school

Smith does not possess the model safety size but checks off just about every other box that teams will be searching for.  His natural instincts and high football IQ allow him to be around the ball at the end of almost every play.

He shows great recognition and closing speed to wrap up the screen play versus Wyoming.

Smith shows patience and awareness as he picks off this tipped pass and returns it for substantial yards.

This has been a knock in Smith’s game – his missed tackles. Here he doesn’t break down or drop his hips, resulting in over pursuit. Over pursues 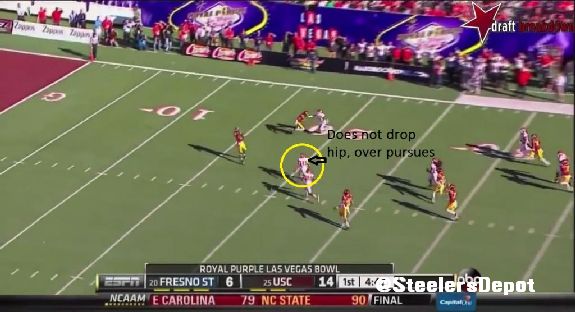 Again, poor tackling form – breaks down and drops hips too late. Smith needs to be patient and not over commit.

Great read on the ball as Smith almost hauls in an interception. Has great coverage and makes a great play on the ball – would love to see a finish here.

He shows excellent concentration and ball skills here and makes an amazing play. Focused on the ball and did not give the wide receiver a chance to make a play.

If I’m Mike Tomlin, I keep Derron Smith on my board as a great value in the 3rd round and an absolute steal in the 4th. Smith can be coached up to correct some flaws in his game and contribute sooner rather than later. With special team value, the Steelers could use the safety depth with only Robert Golden and Will Allen serving as the backups. Golden is a special teams solid contributor and captain and Allen is serviceable. Allen also might not be on the roster for the start of the 2015 season. With Mike Mitchell’s struggles, a young safety will be sought after in the draft to groom just in case Mitchell does not pan out. Smith has a high ceiling and not many detrimental downfalls.