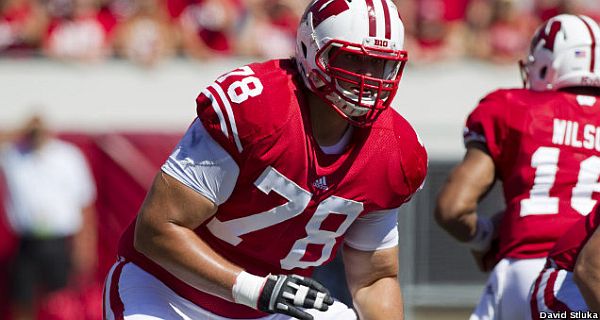 – Struggles with leverage in pass protection, plays too tall and exposes his chest too easily
– Poor 2nd level blocker, struggles in space
– Can’t stick to front side linebacker on combination blocks
– Wish I saw more of a nasty in his game, lacks killer instinct
– Moments where he’ll lunge in the run game, get overextended, fail to carry lower half
– Only played one position in college, right tackle

Havenstein shows elements of the classic “big” lineman but it’d be lazy scouting to place him in that box. He is a big body with decent arm length – though probably a bit shorter than you’d like for his size – and gets that classic road grading push in the run game.

Has no problem clearing a path for Melvin Gordon, tossing the defensive end out of the way.

Works hard to get his arms extended in the run game. 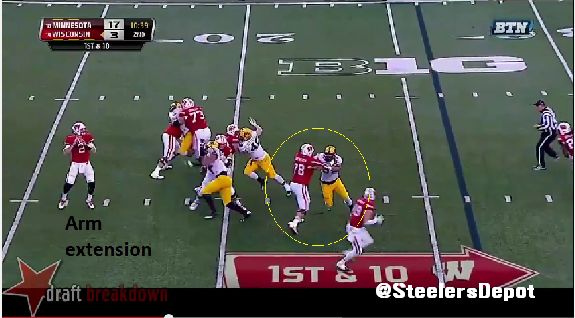 For a guy of his size, he shows impressively quick feet. Like his explosion on his kick slide and shows the ability to keep his legs pumping, avoiding common ailments of tall tackles, like flatback.

Even with the running back helping to chip, this is a quick, clean kick slide against a tackle with a wide alignment. Solid from the Badgers’ RT.

Like a lot of big men, he’s a better blocker in a booth than he is in space. He can set his hips to seal the backside linebacker but often has trouble engaging and sticking to the front side or MIKE linebacker at the second level.

Moments where he gets overextended in the run game, failing to carry his lower half. 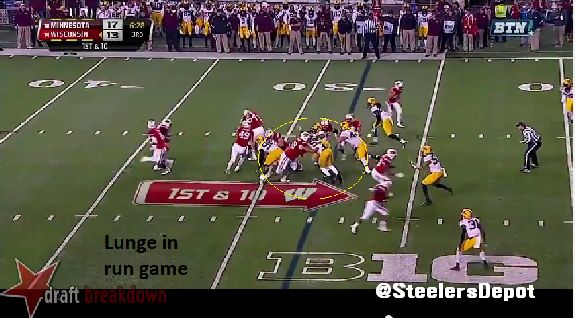 Havenstein actually reminds me quite a bit of Marcus Gilbert. Same body type with quick feet but doesn’t have that nasty demeanor you might expect.

He’s got a nice backstory. Seems like he has a tight-knit family. A courageous mother who survived breast cancer while Havenstein was growing up. Comes from a tall family – even his mom is 6’1. His dad is 6’6, brother is 6’8, and sister is 6’2.

And his ability to keep his weight down is commendable. 332 is a healthy weight for him. 380 coming into school…not so much.

Offensive tackle isn’t an obvious priority but there’s an outside chance the Steelers could look there in the later rounds. How much longer can the team reasonably stick with Mike Adams? In the event of an injury to Gilbert of Kelvin Beachum, you wish there was a little more confidence in the team’s third tackle.

Havenstein will almost certainly be off the board before that point but he’s a worthwhile jumping point for the discussion.

Games Watched: vs Nebraska, vs Minnesota