An evaluation of one of the top prospects at his position. Nebraska’s DE/OLB Randy Gregory.

– Lanky, lacks bulk, especially in his upper body
– Gets locked onto blocks in both phases
– Stiff at times, has trouble changing directions
– Not impactful against the run, gets washed out too often
– Plays with poor leverage against the run, difficulty getting pads low
– Outside of swim, lacking repertoire, hands have to be consistently active
– Late recognizing snap, causes him to be late off the ball
– Lacks experience dropping into coverage
– Production dipped from 2013 to 2014
– Medical red flags

Gregory sure is an impressive athlete. Has a unique body type and a rangy player with sideline-to-sideline speed.

Hops over the running back and closes on the QB, bringing him down to the ground.

And I really love his effort. Motor coupled with his athleticism makes him dangerous. From the backside, runs this screen down.

His length is impressive and it gives him situational advantages. When pass rushing, he’s able to create space between him and the tackle, making it easier to shed. Can’t wait for him to weigh in at the Combine and find out exactly how long his arms are. They’ve got to be at least 34 inches. 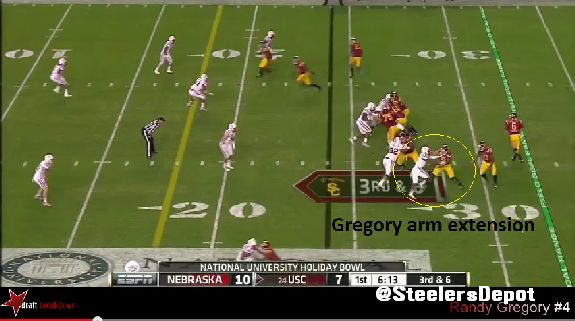 That causes him swim move to usually be effective. Best tool in his arsenal. Keeps the OT at bay and then uses a quick swat to slap the hands away and swim by.

But Gregory is weak. When he can’t shed with the swim, he’s susceptible to locking on as a pass rusher. In the GIF below, he can’t get around the right tackle before getting sealed up the arc, letting the QB climb and scramble.

He relies on that swim a little too much, causing his upper body to be exposed and getting washed. It was very similar to an issue I pointed out with Jadeveon Clowney in my report last year. 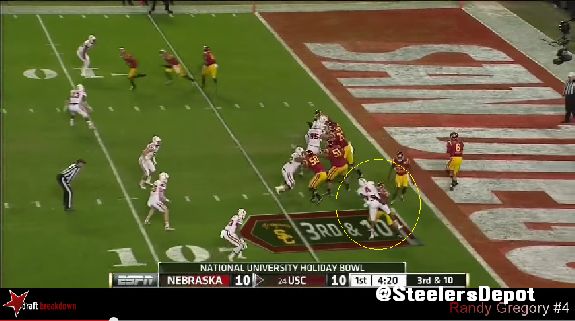 Watch the big kid we profiled yesterday – right tackle Rob Havenstein – completely wash Gregory out against the run. Never able to shed and fill the lane.

Here, the Hurricanes’ TE leverage and wash him out of the hole.

Gregory was actually the very first prospect I watched about a month ago. Watched two games then and two games now. And it’s almost surprising little the overall report changed. Sometimes when you watch a player all at once, you have to work hard to not letting bias get in the way. Treat each game with a clean slate. For me, it’s an extra comfort knowing that there’s definitely none of that at play.

There are certainly parts of Gregory’s game to like. And in some respects, he’s a poor man’s version of the man I mentioned – Clowney.

But I don’t buy into Gregory’s hype the way some do. You need to have strength to play this position. And Gregory lacks it in the worst way. At best, that pegs him as a raw, situational pass rusher that will take three years to start to develop. If he hypothetically ends up on the Steelers, you’re factoring in the time he’ll need to turn into a stand-up edge rusher. And that isn’t worthy of a top ten pick in this hyperactive, immediate results league.

Games Watched: vs Miami (FL), at Michigan St, at Wisconsin, vs USC (Bowl)