Another cornerback prospect in the books today. Our fifth of the series. LSU’s Jalen Collins.

– Naturally tall and is too high in his pedal
– Must learn to sink his hips and bend his knees, get lower
– Creates stiffness in his turn
– Not particularly explosive out of his break
– May have to work on tracking the ball in the air better
– Bit position limited, most action came at LCB
– Registered few splash plays
– Very limited starting experience, raw

This LSU corner does flash big play ability. He really stuck out in the first game I broke down against Wisconsin’s vaunted rushing attack. Collins is just what you hope for in a corner. A strong athlete but willing to get his nose dirty and make a big stick. Thought he showed well against Melvin Gordon and the Badgers’ backup running back who, as an aside, might wind up being as good as Gordon.

This is a terrific stick against the best running back in the 2015 class.

This shows the “linebacker mentality” I referenced in his report. Takes on the FB on this Lead Strong, sheds, and makes the tackle in the backfield.

In the same game, he flashed straight-line speed, tackling Gordon down from behind to save six.

In coverage, Collins flashed the ability to high point the football. Height and length two great advantages he possesses. Great example against Alabama.

On the negative side, the elephant in the room is his inexperience. Stuck behind a crowded group at LSU and at times, his snaps were sparse. Put on the whole game against Auburn and barely learned anything. Didn’t log his first snap until late in the first quarter and often found himself on the bench the rest of the way.

As is an issue with a lot of corners, Collins plays to his size. That isn’t always a compliment. Too tall and has trouble sinking his hips in order to fluidly turn.

Little hard to see but playing tall in his pedal here. 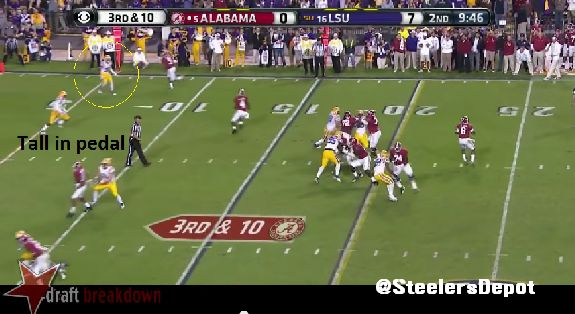 And you can see how stiff he is in his turn. Bottom of the screen, unable to flip and explode on the slant against Amari Cooper.

Hard to say with any certainty but could need to work on tracking the ball in the air while playing in phase. Not looking at the ball or the receiver in the end zone. Luckily for him, the pass is incomplete. Not one of his finer moments.

Starts out well enough. In phase with the receiver. 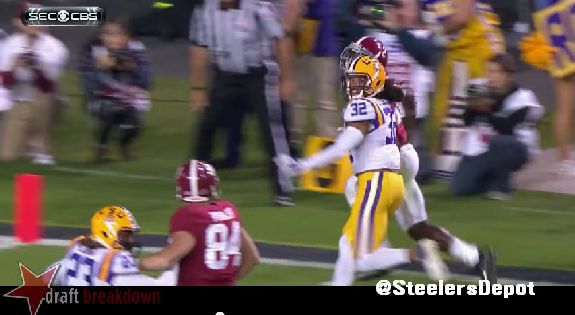 As the receiver extends to reach for the ball, Collins doesn’t put his eyes anywhere. Like he doesn’t realize he’s been targeted. 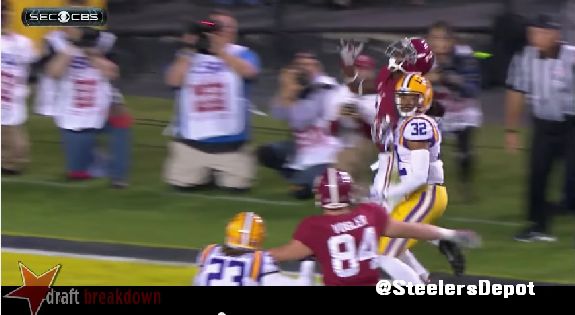 Still the same lost look at the catch point. 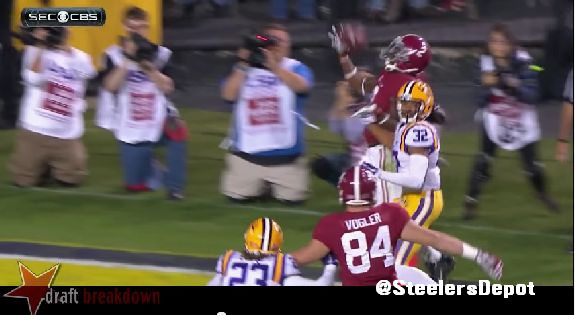 Those taller corners are in vogue today but they come with a downside. Stiffer hips and a poor turn. And we see that with Collins. Don’t see that explosion on his break that you need from the position. There are parts of his game I really like. Mainly, the physicality. In that regard, he’s a Steelers’ corner.

But from what you need in any corner, regardless of scheme, I’m not sold. If anything, it’ll take time for him to fix his warts. If the Steelers buck the trend and decide to take a cornerback within the first two rounds – they haven’t snagged a corner that high under Mike Tomlin – a developmental prospect that may not end up working out is less than ideal.

Games Watched: vs Wisconsin, at Auburn, vs Alabama