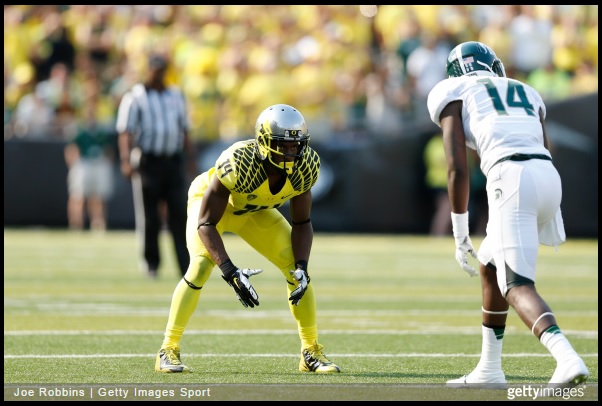 Today we’re looking at the cornerback position and a talented prospect with some injury and size question marks in University of Oregon cornerback Ifo Empkre-Olomu. He would’ve been almost a surefire first rounder if not for his ACL tear.

– Smooth, fluid athlete
– Great recovery speed
– Great awareness and instincts
– Looks good in press
– Willing tackler not afraid to come up in the box
– He can play outside or in the slot
– Versatile in his ability to line up in press-man, off-man, and zone coverage
– Really loose hips
– Good playmaker
– Excellent short area quickness (great trait in a slot corner) and change of direction

– Major injury concern after serious knee injury that caused him to miss the college football playoffs. He might not even be ready to play until midseason
– Not ideal size if you’re looking at him to match up against bigger receivers (I’ll be interested to see how long his arms are)
– He’s too easily washed out when defending the run. He needs to get stronger
– He’s aggressive with trying to jump routes (this helps him to be a playmaker) but he pays for it at times
– Willing tackler but doesn’t use great form and misses too much

– Four star recruit coming out of Chino Hills, California
– Played both running back and defensive back in high school (good with the ball in his hands)
– He was named first team All-Pac-12 three times and was a first team All-American once.
– 9 career interceptions and 8 career forced fumbles

What I love about this kid is that he does a great job mirroring receiver’s routes. It sounds cliché but he seems to have the natural instincts you want to see in a top-flight corner. He never looks uncomfortable and appears to have a short memory. He’s got the confidence needed to play DB at the next level.

His tackling form is pretty poor at times but his vision when defending the run is actually really great. On tape, he looks like he can sniff out runs well. He also does a great job of finishing plays. It seems basic but when his man gives up on running his route he looks to finish the play wherever the ball carrier is. He’s a big time effort guy.

He has a ton of pass breakups in his college career (40). Ifo possesses great instincts that allow him to have outstanding timing when breaking on the ball. I will say it looked like he got banged up on every other pass breakup.

Rumors of his athleticism are not exaggerated. He’s a smooth athlete with superb lateral agility. Yet another reason he reminds me of a smaller Revis is, he has great body control that allows him to break up so many passes.

Here, Ifo is playing off man and reads the quarterback’s eyes. He smoothly flips his hips, extends his arms and gets the pick.

On this play, he does a great job off disengaging from the wide receiver block. However, he doesn’t use great form tackling the ball carrier (this is pretty common for him). However you can see here Ifo plays with reckless abandon.

During this play, Ifo mirrors the receiver well. He breaks on the ball with perfect timing. He has his arm around the receiver’s waist, staying in his hip pocket. This is a subtle technique that could serve him well at the next level. He landed wrong after the play on his arm but was right back in the game.

He’s playing off man here. He got cute and got caught looking in the backfield by the quarterback and his man got past him for a decent gain. With a guy like Ifo, sometimes you live by the sword and you die by the sword. He can make an incredible play and change the game or get you hurt on an explosive pass play. The next play you can see the benefit to his style.

Great vision here leads to him getting past the receiver and tracking the ball for the interception. He’s a smart player that trusts his vision a little too much sometimes but other times it pays off big.

On this play, Ifo plays about five yards off the line of scrimmage. He drops into a zone and shows great vision and closing speed to get the tackle. That’s a textbook play.

Here he can’t disengage from a block and is basically taken out of the play. This is where concerns about his size and strength come into play. It’s not for lack of effort.

IEO shows his vision here once again. He breaks off from the route and makes a great play.

If not for his injury I think he would easily be a first rounder. He’s been compared to the San Diego Chargers 2014 first round pick former TCU cornerback Jason Verrett. I think he’s better than Verrett and he could be a #1 corner in time.

There are really four things that concern me with Ekpre-Olomu. First, he’s not got the ideal size and length you look for in a premier corner. Second: his knee injury. ACL tears are pretty commonplace in the NFL and more and more players bounce back from them every year. But it can be more detrimental to a rookie who needs as many practice and game reps as possible. Ifo might not be able to play until half the season has already been played. Third, his run defense isn’t lacking in effort but he really needs to clean up his form and I worry that my first concern is going to contribute to struggles he has in the run game. Finally, he’s a smart, instinctive player but sometimes he gambles a bit too much (Troy Polamalu, anyone?). He wants to make a splash play, which is great, but it gets him burned sometimes.

He has too much natural ability and playmaking ability to last until the Steelers pick in the 4th round. If they want Ekpre-Olomu I think they’ll have to get him in the 3rd or maybe even 2nd depending on how his knee checks out. If the team can afford to be patient he can be a contributor by late next year and might be a rising star by 2016 that they got on the cheap.

If he were healthy, Ifo would have a good shot at being my #1 corner in the 2015 draft. No matter who drafts him, I think he will be a special player in the next couple of years.