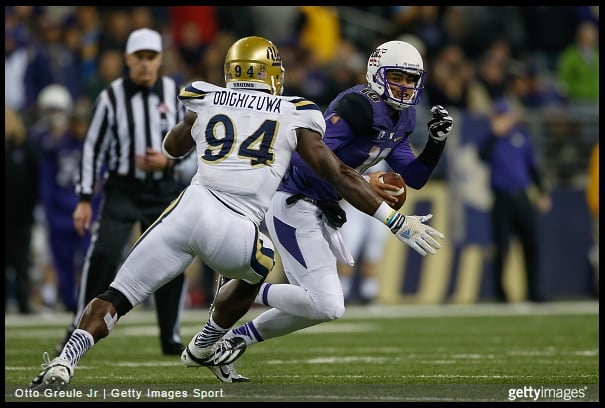 One of the many edge rushers in this year’s draft. UCLA’s Owamagbe Odighizuwa.

– Good size, built well with a lot of muscle, like his length (33 1/8 inch arms)
– Great upper body strength with a violent punch
– Gets his arms extended, length creates issue for offenses, separation between him and OL
– Repertoire of rush moves (bull, swim, spin)
– Excellent hand fighter, really works hard at it
– Overall, fluid athlete who can move in space
– Plays with proper leverage, gets low and into the pads of OL, lets him shed
– Impact player against the run
– Flashes quick first step
– Awareness to get hands up, bat passes, and get in line of sight
– At times, dominant in games
– Played both five techs, some work inside, experience playing with hand up

– Severe lack of bend around the edge
– Extremely stiff-hipped and doesn’t win the edge, power rusher only
– Can cause him to get locked on blocks, disappears as a pass rusher
– Issue with timing the snap count, tends to jump too early
– Position at next level, tweener?
– Serious medical red flags, potential chronic hip injury
– Limited starting experience
– Average production

There is a lot to like about Odighizuwa. Throw on the USC tape and you’ll see a guy straight take over a game.

We’ll start with his impact in the run game. Shows proper leverage and his length lets him create separation against the OL, allowing him to get under the lineman and shed. Shows it here on a 3rd and short.

I’ve always admired players with quick, violent hands. Reason why I was so high on a guy like Preston Smith. And Odighizuwa is cut from a similar cloth.

Love the hand fight and work to beat the left tackle. Can’t win the edge, tries to shed inside, can’t, and tosses the tackle’s hands away again, to disengage and finally bring down the QB.

Strong hands and a violent punch. Blows back the left tackle and then runs through him en route to the QB.

He doesn’t have elite length in terms of how long they actually are but he sure knows how to use them. Consistent, full arm extension. 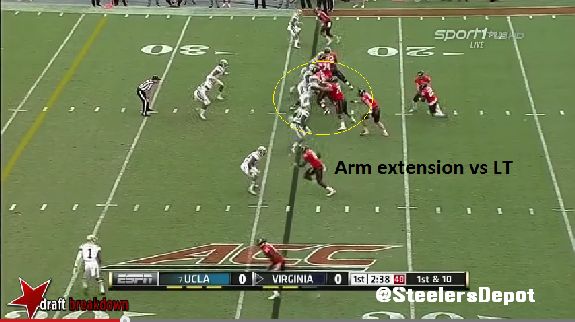 And that length helps him get to the QB, even when he can’t finish with a sack. Keeps his outside arm free to get a piece of the ball as it’s released. Creates an INT for the Bruins. 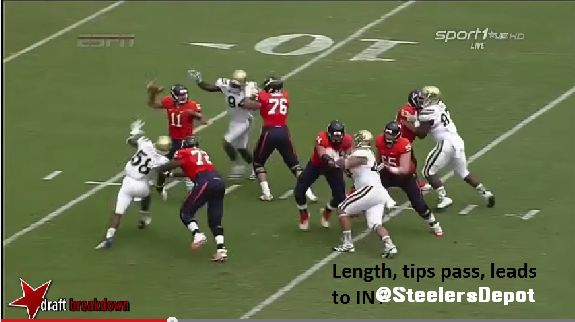 Lot of other aspects of his game to like. Must be consistent but you see an explosive first step. Pound for pound, a great athlete who can flow sideline-to-sideline. Awareness to get his hands up and the reason why he nearly batted down more passes (5) than he had sacks (6) in 2014.

Swats this one on 3rd and goal against Kansas State. 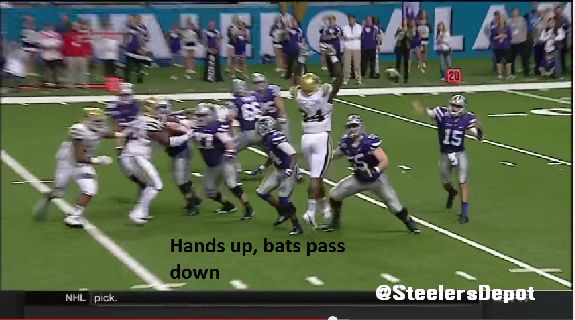 But the one aspect of his game is pretty damning. There is no bend to his game. Stiff in the hips and never really showed he could turn the corner.

Lined up as the left end, despite a good get off, he gets pushed up the arc and taken out of the frame by the tackle. No bend, hip/ankle flexibility.

Same thing against Virginia, working against the left tackle this time. 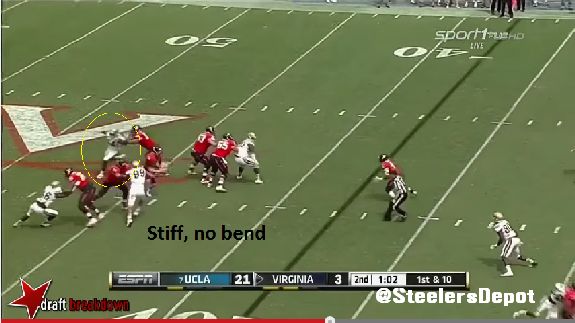 He needs to work on timing the snap better. Times where he’s slow off the ball. Not a physical issue as it is a reactionary one. 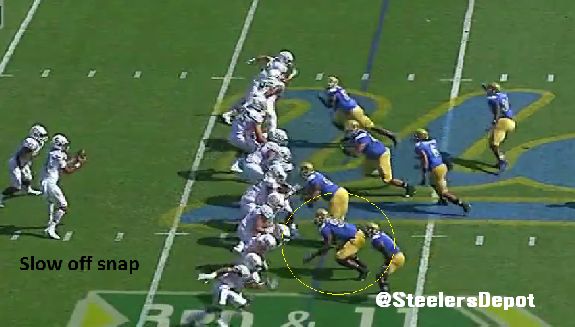 At the upcoming Combine, the medical portion will be as important as anything for Odighizuwa. His hip injuries are major concerns and perhaps the biggest medical red flag for any of the big names in Indy.

As I wrote, he missed the entire 2013 season due to two hip surgeries. The initial one – to his right – happened in a 2012 game against Nebraska when three players fell on top of him. As he tells it, he immediately felt his hip tear and “the next day, I could barely move my leg.”

It’s unclear the nature of the injury to the left or the cause – ostensibly, due to the burden of being his only good hip – but the left hip went under the knife four months later, officially knocking him out for the 2013 season.

I’m no doctor and this is a topic best posed for Dr. Melanie Friedlander than a Youtube scout but hip injuries are serious and carry extreme risk. Always the chance of another injury or even more probable, the hip wearing down throughout his career and becoming arthritic.

Pre-injury and in 2014, his production was sub-par. Came in spurts. There were times when Odighizuwa disappeared. He can get locked up as a pass rusher and his impact dwindles.

If he had just 11.5 sacks in college, what will he be able to do in the NFL?  Of course, the tape shows better than the production. And the former always trumps the later.

Like a lot of these edge rushers, he lacks a true position. With his lack of flexibility, an edge linebacker probably wouldn’t work. Lack of experience playing with his hand up – only a minimal amount of time in 2014 – and next to no experience dropping into coverage means he’ll need a lot of development in that area.

I’d almost think about bulking him up 15 pounds and making him a one-gapping three tech who won’t have to win that edge and can bang around inside. He’d still be undersized but has shown to win many matchups as the smaller man at UCLA.

Failing that, he’d be best playing a strong side end in an even front who can move around in sub-package football.

Neither of those things fit what the Steelers are looking for. Odighizuwa gets a pass from me.

Games Watched: at Virginia, vs Oregon, vs USC, vs Kansas St (Bowl)