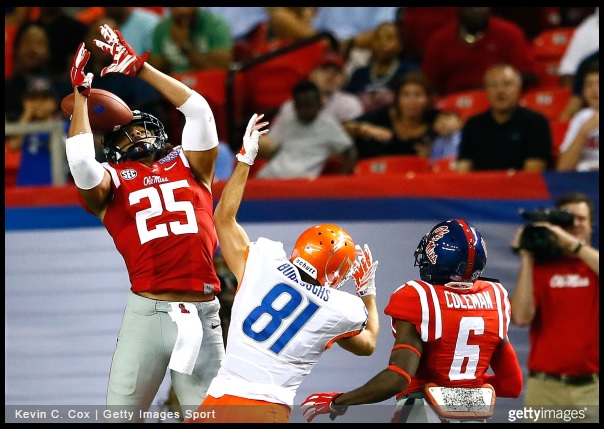 The Steelers likely will have either Troy Polamalu or Shamarko Thomas paired with Mike Mitchell to make up the Steelers 2015 safety tandem. Even if this is the case, the Steelers don’t know exactly what they have in Thomas, they lack quality depth at both spots, and Mitchell will probably cost more than he’s worth and be a possible cap casualty.

The Steelers will likely grab a safety somewhere in the draft and may even look in the first three rounds. Today we’re looking at Ole Miss safety prospect Cody Prewitt.

– He’s a little passive in the run game. You’d like to see a guy like him screaming in the box a la Kam Chancellor
– Lateral agility is not great. Not a guy you want covering slot receivers and some more athletic tight ends
– He takes some really poor angles when defending the run
– Soft hitter
– Inactive demeanor
– Not a smooth or fluid athlete. He flips his hips too early and his backpedal is robotic
– He hesitates on too many plays. Smart QBs are going to catch him flat-footed and unsure and expose that

– Four star recruit coming out of Ellisville, Mississippi
– Played both running back and safety in high school
– He was named first team All-American in 2013 and 2014
– 12 career interceptions

I hate the phrase, “Looks like Tarzan, plays like Jane” because it takes a unique human to be able to play in the NFL but in Prewitt’s case, his play really doesn’t match his physical build. He looks like he should be an absolute banger in the run game but he is just not active enough when defending the run.

He should be credited with about a million 1/4 tackles because I lost track of the amount of times he had one hand on the ball carrier to finish plays. He whiffed on tackles completely too many times .

He’s a smooth athlete with superb lateral agility. Yet another reason he reminds me of a smaller Revis is, he has great body control that allows him to break up so many passes.

This is the best hit I’ve ever seen from Prewitt. He diagnoses a quick bang-bang play and folds the ball carrier in half.

Great job by Prewitt on this play except for the terrible finish. He positions himself well and does great tracking the ball but then lets it clang off his hands. From a guy that’s not a big hitter you want to see a little better ball skills.

Here you can see a lazy arm tackle attempt by Prewitt and he gives up precious yards. He has to do a better job of wrapping guys up.

This is the kind of play I’d like to see more consistently from Prewitt. He changes directions a couple times but he reads the play well and most importantly he’s decisive! He keeps his motor going and uses great form in wrapping up Alabama QB Blake Sims.

On this play he’s had to open his hips early as he tries to chase down the receiver. His long speed is good enough to get to the receiver but he lets his foot off the accelerator. This is where the killer instinct comes into play. A lot of safeties would be ready to crush a receiver in the open field. Too much finesse, not enough nastiness.

Prewitt didn’t see a lot of action in this game due to Auburn’s run heavy offense. Cody is a little off on his angle of approach here and has another sloppy arm tackle. To be fair he had a good form tackle shortly before this but had a lot of help beforehand when other defenders slowed down the ballcarrier.

On this play, Prewitt decides to give help to the corner covering the outside receiver and misses the receiver inside of him moving out. Not all his fault but he wasn’t even in the same neighborhood.

There was a boatload of hype surrounding Prewitt during and after Senior Bowl week so I was hoping I would turn on the tape and come away impressed. However, I just don’t see it on tape. He’s too much of a finesse player. A safety with tackling form issues (ahem, Mike Mitchell) can be coached up but you can’t teach a guy how to play with a violent edge. It’s not exactly a tangible trait but Prewitt just seems to lack that killer instinct defensive players need at the next level.

I think his movements are too choppy and he doesn’t have the agility needed to be a starting free safety in the NFL.

Not to beat a dead horse but his tackling just isn’t good enough. He has hardly any physicality at all in his game. He’s going to struggle at the next level when guys like Jeremy Hill truck over him and he can’t wrap up an Alshon Jeffery.

I can’t see him slipping out of the 5th round due to the fact that some team will gamble on his size at the position alone.

If Prewitt were new to the game or position, some of his weaknesses could be look past. However, this guy has been playing defensive back since for well over eight years now and if he hasn’t played physically before he probably won’t at all in the future.

The Steelers should stay away from Prewitt until the 5th round. Mike Mitchell is guilty of targeting a lot and he doesn’t wrap guys up but no one can accuse him of being afraid of contact. Prewitt is a guy that you would have to hope becomes more aggressive.