The cornerback position may be the Steelers most glaring need. With this said, be prepared for many cornerback prospects to be profiled. Today, we dig into the position even deeper with the evaluation of Kevin Johnson.

– Needs to bulk up, too light
– Gets washed away in the run game
– Penalized too often, especially when he loses coverage
– Gets bullied at POA, can’t get off blocks
– Tackling form needs refined, tends to one arm tackle
– Sometimes he gives too much or not enough room at LOS
– Academic Ineligibility issue (2011)

Johnson was involved in a lot of different looks. He was in press, off-man, and various zone schemes. His best play was in the zone as it allowed him to be more available in the run game and use his ball hawking ability. His strengths and weaknesses are both quite glaring.

Johnson really shines in the zone, and here is why. He does a great job moving his hips, turning and locating the ball. As he is locating the ball he makes sure the receiver has no chance of grabbing it and defends it perfectly. His length and ability to high point the ball play key roles in making this play.

Again, in the zone, Johnson reads the quarterback like a book and jumps the route for the interception. He possesses great instincts and has a high football IQ. These traits allow him to jump routes like this one, and these are the plays that Steelers fans are begging for in a cornerback. These types of plays are not uncommon for Johnson as he has a knack for jumping routes and intercepting or defending passes just like this.

While he normally has good coverage on his target receiver, he has a problem of creating unnecessary penalties when he gets beat. This will drive defensive coordinators crazy as penalties can change games. Here, he bites on the pump fake and grabs onto the receiver’s jersey. It is 4th and 14 here, those types of penalties can’t happen.

Kevin Johnson’s length and 6’1” frame shown here. He is tall in his stance and petal. 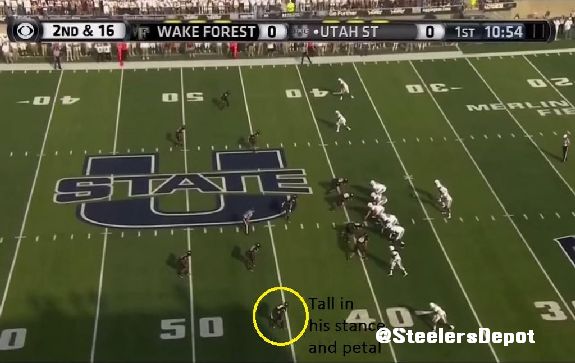 His excellent play recognition and closing speed really propel this play to be quick and painless to his defense. He reads the quarterback once again and sniffs out the play. Once the receiver catches the ball he is immediately dropped to the ground by a great tackle. Here are two different games that he successfully uses this same approach.

The absolute worst part of his game is his ability to get off blocks in the run game. Whether it is a wide receiver, tight end, or offensive lineman, Johnson never stands a chance. Weighing 175 and not really possessing a whole lot of upper body strength puts him at a great disadvantage. In the Pittsburgh defense, the cornerback position must be filled with physical players who can contribute play by play in the run game, and these gifs will show why Johnson does not have that ability. Here are two different games that display Johnson’s weakness as a run defender.

There are no major injury concerns with Johnson, given his frame that is surprising. An off-field concern is the 2011 season where he was deemed academically ineligible. Slotting Johnson to the Steelers in your personal mock draft may be a mistake. A Steeler cornerback must be able to contribute in the run game. He would be facing backs one on one that have over fifty pounds on him. He would be facing NFL sized players who will absolutely wash him out of the play and make him a non-factor. That is not the typical prototype Steelers cornerback. He does have the length and ball skills desired, but I think Mike Tomlin and Colbert will cross his name off of their big board if Johnson does not put on weight soon because the combine is right around the corner. Drafting a player with a tool belt of skills and abilities is important, but if you’re drafting a cornerback with a hammer missing from that belt, you will have reoccurring problems.