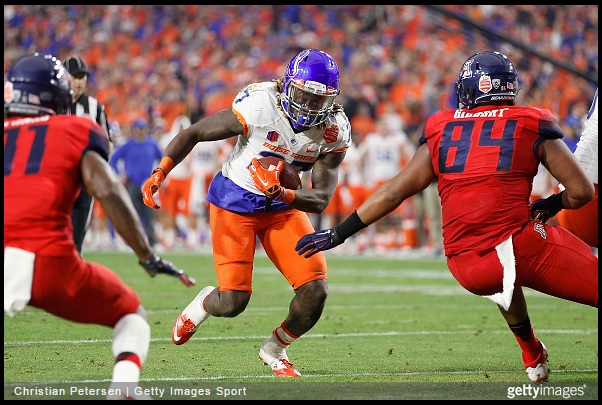 With Le’Veon Bell with no true back-up, a running back will either need to be signed from free agency, or drafted. Depth is needed, so we will dive into the profile of running back Jay Ajayi (Pronounced: Uh-jie-ee).

– Sub-par in pass protection
– On the taller side for a RB
– Needs to work on catching with his hands
– Bounces out runs for negative yards
– Runs high at times
– Fumbling issue, 12 over 3 seasons

There is not much to dislike about Jay Ajayi’s game. He is a very physical, downhill runner who fights for every yard. You can tell he hates going down and he puts 110% effort into every rush. He is as close to a complete player as you can ask for in this draft. He is a workhorse runner, a steady pass catcher, and a reliable pass protector. Although, he could use some work in his pass protection, but it’s not horrible.

Although the blocking was great here, he made just about every would-be tackler miss. Whether it was with his quick feet or his vicious stiff arm, he created this explosive play. After receiving the hand-off, he uses his vision to see a gap being filled, so he counters the opposite way as a hole opens up, he fills that gap and is off to the races. 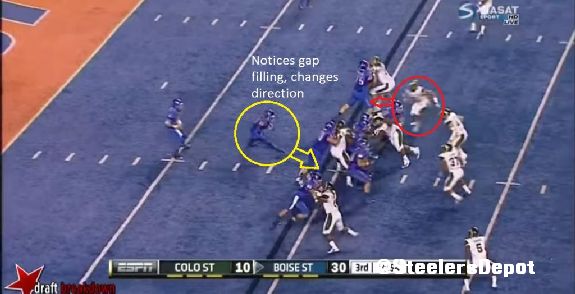 Taking a page out of Le’Veon Bell’s personal playbook, he shows his great vision and patience as he hits each hole quickly and evades potential tacklers. His quick and effective decision making is vital as this limits the frequency of a negative play. He tends to hold the ball a bit further away from his body and protected, which leads to increased fumbles, but Ajayi breaks tackles and does not let any defender threaten his fate to be in the end zone.

A common knock to Ajayi’s game is his pass protection. The problems here are a technique and simply an effort issue. He needs to square his hips to the attacking defender and use his strength to defend his quarterback. Ajayi just gets one arm on the rebel in pursuit and it is not enough as the quarterback gets hit and it is a broken play.

Here, Ajayi demonstrates his patience and strength as he follows his blocks correctly to finish this drive. Towards the end of the play, he dishes out a powerful stiff arm and scores. When it comes to the red zone, Ajayi’s determination to score notably increases.

At times, Ajayi can try to be flashy and bounce out runs which result in negative yards. He has good speed, but sometimes that is not enough to get to the perimeter. He does not do this often, but getting to the perimeter at the NFL level becomes even more unlikely.

Along with being a physical runner, the Steelers are in the market for a pass catching back. A running back with not just the ability to catch the ball, but the capability to gain excessive yards after the catch and extend plays. Ajayi displays those exact qualities here as he catches the ball out of the backfield, secures the ball, and out-runs every Colorado State defender.

Some may argue the most complete back is Ajayi. He could see his stock rise as scouts are starting to notice his production in all three aspects of being a complete running back. It may be just me, or his dreads, or the number 27, but Ajayi reminds me of a faster and quicker LeGarette Blount. As most Steelers fans have probably exited this profile after that comment, it was a compliment to Ajayi. He possesses the strength, physicality and toughness that Blount has and puts it to good use. Without a true backup, and with Bell facing what could be a 2-game suspension, what value does the running back position have to Pittsburgh’s front office? Ajayi will probably be a 3rd round pick and it is possible that he will be available for the Steelers to swipe off the board, but will the Steelers draft another running back in the 3rd round? Are there other areas of need to consider before addressing the running back position? I think the Steelers wait until the 4th round at the earliest to draft a backup Bell, and it is possible that this pick sees action the first two games when Bell is unavailable.