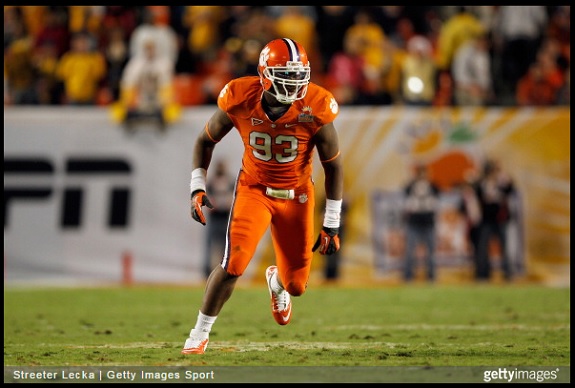 – Intriguing build who can add weight to his frame, superb length (34 1/2 inch arms) and a long-strider
– Gets full arm extension in both phases, puts space between him and opposing lineman
– Quality athlete capable of playing in a two or three point stance
– Shows an above average first step off the ball
– High football IQ, shows awareness as a pass rusher and will get his hands up if he can’t get to the QB
– High effort, motor player who is an opportunistic player, willing to flow laterally down the line
– Flashes active hand use as a pass rusher
– Received a little bit of work dropping into coverage
– Substantial amount of upside
– Lots of starting experience

– Developmental prospect who has to fill out his frame and add upper body strength, currently weak and too easily swallowed up by lineman
– Bull rush lacks power and easily rebuffed
– Has difficulty shedding in the run game, prone to getting stuck on blocks
– Must show more consistent and active hand use to be more of a threat as a pass rusher
– One-sided player, LE/LOLB
– Unlikely to see much of an impact for 2-3 seasons
– Statistically down senior season and never put up any gaudy sack numbers in his career

Crawford isn’t currently at the conventional three technique weight, he’ll have to add at least ten more pounds, but in a weak five tech class, his height and length make him an attractive option. The Steelers typically target defensive ends with terrific length – like Crawford, Cameron Heyward and Stephon Tuitt are 34+ inches.

Do like his effort and ability to close. Shows the above average athlete he is. Gets out on the edge to track this quarterback down.

Heady player with a good football IQ. Always looking to get his hands up if he can’t get to the quarterback. Which for Crawford, was all too often in 2014.

Despite being engaged with the right tackle below, he watches the quarterback’s eyes and uses his length to knock the throw down.

Again, we’re seeing his length here. This is what we want when we talk about creating space between blocker and defender. Does have the luxury of going against the tight end in the screen shot below but I’ve seen it against offensive lineman, too. Physically, the traits for there for Crawford. 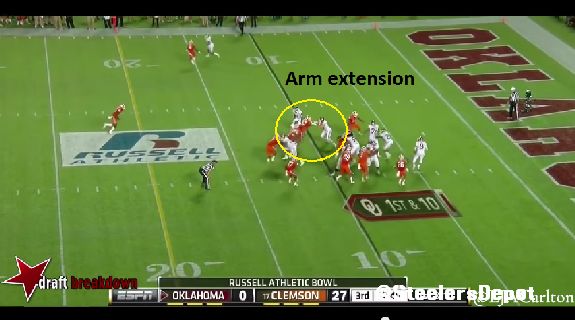 There’s just no upper body strength for him. Not the “nasty” to his game you’re looking for in the position. Some have even projected Crawford to make the transition to outside linebacker, which isn’t unfathomable. His numbers reflect that. It’s important to preface it by saying long arms typically lower bench press numbers and he dealt with some sort of shoulder injury, but the former Tiger could only muster up 17 reps of 225 at his Pro Day.

We see that lack of strength on tape, too. At the top of the screen working as the left end, he is unable to move the right tackle, who then rides him for the rest of the play.

Similar issues in the run game. Swallowed up and shoved out of the play by the mammoth Daryl Williams. Crawford is again working as the LE.

His movement skills and versatility, playing up or down and even dropping into coverage a few times, makes him a good fit in the Steelers’ defense. Guy that is capable of playing in nickel packages and fits with the Steelers’ occasional wrinkle of dropping lineman.

There is a serious strength issue, making Crawford unlikely to contribute much in year one. But in this aforementioned that isn’t brimming with talent, he presents good value and upside in the latter portion of Day Three. John Mitchell is the ideal coach to unlock Crawford’s talent.