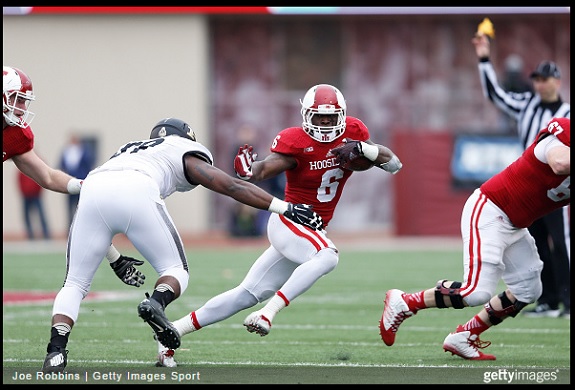 The running back position seems to be secure to some and to others it is still a mess. With the possibility of the Steelers drafting a running back, we look at Tevin Coleman.

-Ideal size for position
-High effort guy, strives to get every yard possible
-Displays a combination of speed, power and quickness
-Elite burst and ability to hit holes with authority
-Good, not great in pass protection
-Great recognition of where holes open up at, makes quick cut to hit the hole
-Fast, quick and has the agility to be a homerun back
-North/South runner, doesn’t get tackled for loss much
-Packs a punch, punishes defenders and potential tacklers
-Hits/squeezes through small holes, makes something out of nothing

-Always in ‘sprint mode’, doesn’t have patience to read out blocks
-Trips over feet at times because of that sprint mode he’s in
-Carries ball far away from body, causing fumbles
-Lowers his shoulder and lunges forward when he thinks he is going down, needs to stay low and keep his feet moving to break tackles.
-Goes down too easily at times, needs to work on balance
-Inconsistent in pass protection
-Suffered an ankle injury that cost him the final three games last year, a foot injury which kept him out of the combine.

Coleman is electric. Best word to describe him. He is a true homerun back who at any moment can stretch the field and go the distance. He has some balance issues and can sometimes trip over himself because he is moving at such a high speed. He is a former track star, so he wants to go north as quickly as possible, but he needs to learn to read his blocks and hit the holes instead of receiving the hand off and running into defenders.

Coleman is a high effort back who strives to get every yard possible. Every carry he wants to do his best for his team. Here is an example of that. After the handoff, he is patient and reads his blocks correctly. He hits the gap, breaks two tackles and gets a great gain.

Coleman possesses speed, quickness and power. He doesn’t look very big but he sure packs a punch. Here, he receives the handoff and is already in another gear. He displays great speed and quick footwork to get to the end zone. Once he reaches the goal line, he lays a nasty hit on a defender, making him sorry that he even tried to stop him.

After getting the handoff, Coleman tries to engage into his sprint mode. In the first GIF, he trips over his own feet and a Michigan defender is able to pop the ball out for a turnover. Coleman has some issues with being in his sprint mode and he can get ahead of himself too quickly and trip. This is what happens in the 2nd GIF. This usually happens when the pocket collapses.

Coleman reminds me of CJ Spiller and this GIF will back that comparison up. He recognizes the pressure and bounces the ball outside. With one quick cut, he is off to the races. Against the National Champions, he is able to out run everyone for a 90-yard score.

Pass protection is not a major issue with Coleman but it is an aspect where he surely needs to improve. He is not consistent enough to convince me that this isn’t a flaw. Here, he simply doesn’t square his body with the defender and merely pushes him. Not enough.

Another reason why Coleman reminds me of Spiller. They both have that elite burst and ability to hit gaps quickly and with authority. They use their speed to their advantage every play. In the first GIF, he hits the gap and is touchdown bound, barely touched. In the 2nd GIF, he is hindered at the line of scrimmage but that doesn’t cause him to shift down a gear. He slips in and out of a few gaps and lays a hit on a defender, going forward.

Even though he wouldn’t be running much or any wildcat in Todd Haley’s offense, this run is impressive. His ability to squeeze into small gaps and avoid defenders is what makes him special. The picture below the GIF will show what I mean.

In red I have highlighted defenders who are ready to make the tackle on Coleman. In light blue is the small gap created and the dark blue arrow shows Coleman’s route. Such a small hole, great ability to take advantage of his lean frame.

Coleman will be ready to start for a franchise by September. If the Steelers choose to draft Coleman, it is for a long-term backup position and to return some kickoffs and punts. I see Coleman as another Spiller which is a win for any franchise who pulls the trigger on him. He is electric and is a homerun hitter.

He is dynamic and could be a difference maker for a franchise who is in need of a running back. With that said, I don’t think the Steelers draft Coleman. He is arguably the 3rd best running back in this year’s class and will go fairly early in the draft. With the DeAngelo Williams signing, I can’t see the Steelers taking a running back earlier than the 5th round. They may not take one at all.

If Mike Tomlin and Haley want a great change of pace back that could provide the ‘take it to the distance’ aspect that Le’Veon Bell lacks, then Coleman is there guy.  It will cost at least a 3rd round pick to snag him.