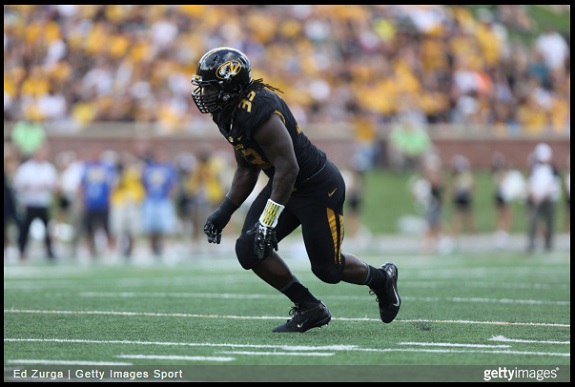 As we delve further into the Pittsburgh Steelers offseason, our attention has begun to shift towards the draft. Live we’ve done in the past, these reports will cover the prospects of the 2015 NFL Draft, placing an emphasis on those who could help the Steelers the most.

We’ll kick Monday off with a more high-profile player than what I covered last week. Missorui’s edge rusher Markus Golden.

– Nice weight and though he lacks length, has big hands (10 1/2 inches)
– Above average pass rusher who shows the ability to bend, flatten the edge, and get upfield
– Shows a good albeit not great first step off the edge, times the snap count well
– Solid arsenal of pass rushing moves, high pass rush IQ who varies his moves and knows when to counter
– Has shown ability to convert speed to power, explosive as he shoots his arms with proper hand placement, and can bench press tackles
– Excellent motor, runs hard to the ball, be it flowing down the line or chasing it downfield
– Superb senior season, dominant statistically once given starting role

– Won’t dominant as a pass rusher, good but not great explosion as an edge rusher
– Runs hot and cold getting to the quarterback, will disappear for stretches, must consistently show tools to be a successful pass rusher, bend to avoid getting pushed up the arc, and active, violent hands
– On the ground too often, must show balance when trying to rush the edge
– Run defense is an unknown, one-gap, slanting scheme that made him difficult to judge
– Usually did not succeed few times he had chance to stack/shed against the run, must continue to develop upper body strength to hold POA
– Played strictly one position and very rarely dropped into coverage, saw it once across five games, learning curve as he transitions to standing up
– Only a one-year starter

Admittedly, it was difficult to get a reliable evaluation and why I ended up watching five games. It’s not an indictment on Golden as much as it was his competition. He seemed to always be facing a freshman or sophomore right tackle, making it hard to discern if Golden was just that good or the lineman was just that bad.

From a production standpoint, Golden wasn’t that dissimilar to the other Tigers – the highly touted Shane Ray. Ray had 22 TFL compared to Golden’s 20 while the SEC defensive player of the year had 14.5 sacks to Golden’s 10. Slight drop off but it’s obvious Golden enjoyed a strong season to, constantly fighting to get out of Ray’s shadow.

In fact, Golden faced a lot of double-teams from the tackle and the running back.

He isn’t the quick-twitch athlete Ray is but is an above-average pass rusher. Good first step and shows ability to flatten the edge and get upfield. But it’s the arsenal of moves he shows, and the glimpses of converting speed to power, that really impress me. He has a more refined game than most of the edge rushers I’ve seen. Rip, bull, swim, and an inside counter, are all moves I’ve seen him put on opposing lineman.

Golden converts speed to power below. Explosively shoots him arms, gets under the tackle, and bench presses to disengage.

Again, the caveat here is that this came against a freshman RT early in the 2014 season. Still, it’s impressive domination. 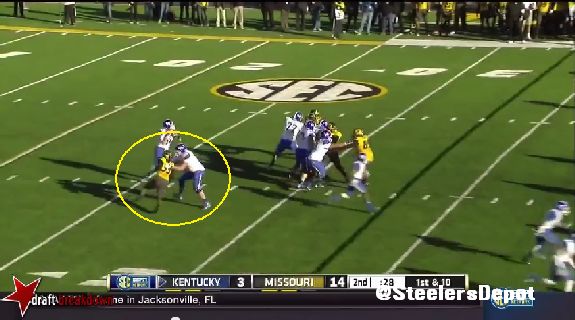 Going back to the UCF game, Golden beats the RT with an inside swim. The fact the running back slid his way is the only thing preventing the pressure while Ray gets a one-on-one with the tackle.

He has an admirable motor. Relentless and chases down plays from any position on the field. It’s one way to separate players. Guys that are willing to put it all out there each play. Makes them that much more disruptive and impactful.

As odd as it is to say, perhaps the most exemplary moment of this came on a Toledo touchdown. It is early but it’s a lower-level opponent the Tigers knew they were going to beat up on. Golden doesn’t have to chase it 40 yards downfield but tries anyway, leaping out in a desperate attempt to save the touchdown. It fails but still shows remarkable effort.

However, he isn’t a dominant edge rusher and there are stretches were he disappeared. Watched him against Florida and he barely made a blip on the radar. Doesn’t have great flexibility and at times, is vulnerable to getting run up the arc – the cardinal sin of any pass rusher.

He’s an unknown to highly questionable against the run. Missouri asked Golden to slant and one-gap a ton, making it difficult to get a read of how well he stacks up against the run. But overall, I don’t see the strength to hold the point of attack and a player that is on the ground too often.

Toledo’s right tackle sticks and washes him for the entire duration of the play. Golden has to be able to disengage.

With the gluttony of edge rushers, it’s easy for some players to fall between the cracks. Especially one playing opposite of a bonafide Top 20 selection.

Golden doesn’t possess the ceiling Ray has, and will probably never become a dominant edge rusher, but it’s hard to see this guy falling out of the league quickly. He has to learn to stack and shed the run, something he gets a partial pass for being asked to do so few times, but he aims to be a steady, consistent source of pressure.

And in a system that is chalk full of risk and loud gulps after each draft card is turned in, drafting Golden creates a lot of comfort.

Games Watched: vs Toledo, vs UCF, at Florida, Kentucky, vs Minnesota (Bowl)