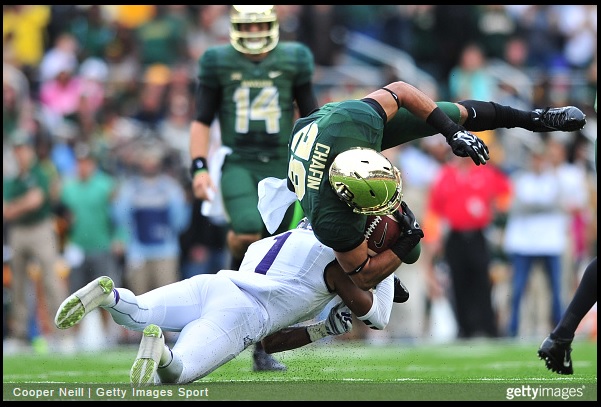 Today, we explore the safety position, which the Steelers should want to get younger at. That is the position we attack today as we take a deeper look at Chris Hackett.

The two biggest question marks on Hackett are his frame and his speed. I think that his 40 yard dash number will not do him justice as he plays much faster. At 195 lbs., he looks lanky and might need to put on some muscle to tackle the bigger NFL player. Hackett takes great angles and always seems to be around the football. He doesn’t shy away from open-field tackling; actually he is quite good at it. The run game does not scare him away, but you would like to see him attack faster and have more urgency to the ball carrier when other defenders seem to have the play under control.

Hackett does a good job being patient and reading running backs. He creeps up and when he reads the ball carrier, he attacks. He sinks his hips and stays low to make the tackle. This is where Hackett thrives; he is a very physical safety who makes the plays that are critical.

With 7 interceptions his final season with the Horned Frogs, Hackett proved he has great hand-eye coordination and is great at reading quarterbacks. Here, he simply drops into his zone and reads the quarterback. When the ball is released, Hackett jumps the route, intercepts it and returns it for a good chunk of yards.

Some missed tackled by Hackett are due to his lack of upper body strength, which is why he tends to tackle low. Here, he takes a good angle and attacks quickly, but when attempting to tackle the running back, he doesn’t bring his feet and misses the tackle.

Hackett is best suited at the free safety position and for good reason. Aside from biting hard on play action, he has excellent over the top coverage ability. Here, Hackett covers the top of the Kevin White on Kevin White crime and picks off this poorly thrown ball. Hackett’s teammate had great coverage on his receiver and wasn’t looking for an impending pass – which is where Hackett came in. 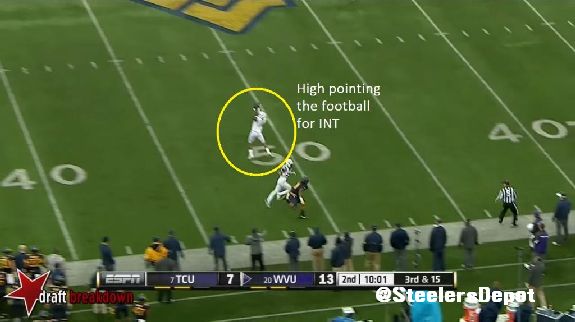 As I have stated before, Hackett bites hard on some play action. This play is no different. When he realizes it is a pass, he tries to assist in covering the only receiver in his area but doesn’t take his eyes of the quarterback. This keeps him out of position to make a play and the pass goes for a first down. You would like to see him play this better and shift his hips more fluidly. The effort was there but he just couldn’t recover.

Hackett lines up in the box and his job is to read the play. After the play ignites, it’s play action and he isn’t fooled. He sees the wide receiver to his right on a slant route and cuts in front of the ball’s path to break up the play. You love to see these types of plays that aren’t flashy but display a player’s instincts.

With Troy Polamalu’s career uncertain and Mike Mitchell’s first season in black and gold an under-performing one, safety is a position that the Steelers should want to get younger at. Shamarko Thomas is due to be Polamalu’s successor, and Mitchell just signed a five year contract in 2014. If the Steelers decide to part ways with Mitchell after the 2015 season, a safety will be of great need. If Hackett is drafted by the Steelers, I see him as a first year special teams contributor – and a good one at that. He thrives at open field tackling and will be used accordingly to make his attributes shine. I value him to be a 3rd round pick but he may slip into the 4th if teams desire a bigger prospect such as Cody Prewitt or Durell Eskridge. It really depends if Kevin Colbert and Mike Tomlin buy Mitchell and his injury story and if they think he will play at a high level in 2015 worthy of him playing out the rest of his contract.