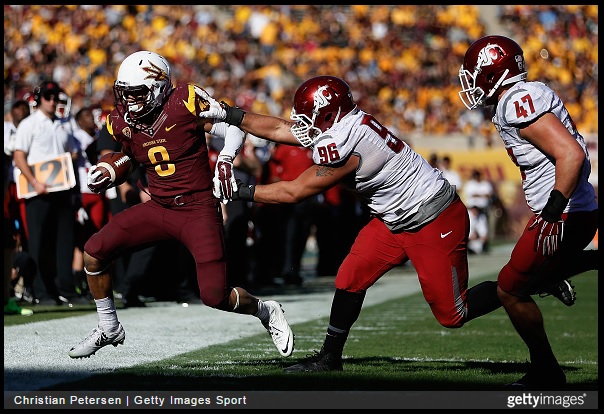 The Steelers may be in the market for a five-tech defensive lineman who can be a reliable rotational backup. The Steelers missed out on Josh Mauro who was signed off of their practice squad mid-season. Today, we look at Xavier Cooper, who can possibly become what Mauro was supposed to become.

– Explosive first step, quick off the snap
– Violent hand use, knows how to use them well
– Endless motor
– Solid upper body strength
– Has a variety of finesse moves
– Moves very well for his frame
– Quick footwork
– Pursues laterally and downfield
– Versatile, can play 3 or 5 tech
– Great upside
– Effort doesn’t subside when double-teamed

Cooper can be drafted to play a 4-3 DT, but I think he is best suited to be a five tech in a 3-4. Under Keith Butler, the Steelers could change things up some and run a hybrid defense. Cooper has the first explosive step and the lateral movement that should open some eyes. He gets in the backfield quickly but tends to leave some plays on the field.

Cooper shows his explosive first step and power to get to the quarterback. His footwork is quick and he wraps up Marcus Mariota. After his first step, his left arm swipes up and just over powers the guard. NFL teams love these types of players.

John Mitchell will be excited to see this trait in Cooper. It’s a screen so Cooper gets in the backfield with ease. When the ball is thrown, he runs and tracks down the ball carrier 8 yards from where he began. Love the relentlessness and endless motor of Cooper.

When you’re unblocked and have a clean shot at a sack, making that play is huge. Here he is barely touched, gets both arms around Mariota and doesn’t bring him down. Would like to see him take a bit of a better angle, but the pursuit was great.

Again, Cooper fails to bring down the quarterback with both arms around him. The pursuit was excellent as he explodes off the line showcasing his strength, but when you’re that close to bringing down the ball carrier, the play must be made. If he could finish these should-be sacks, his numbers would have been through the roof. I bet Mitchell could really polish his tackling ability. 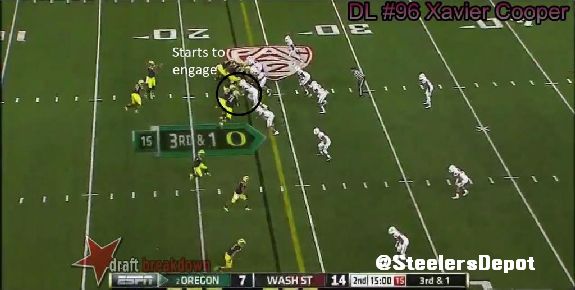 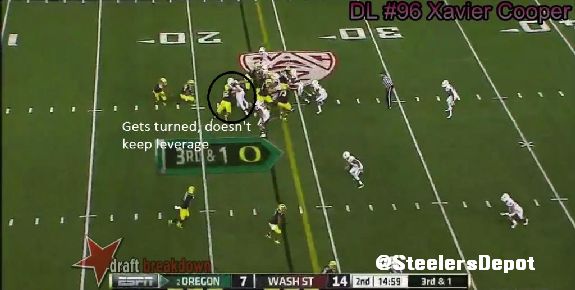 Although it appears that two of Cooper’s two teammates have Mariota all wrapped up and taken care of, that doesn’t deter him from reassuring that very fact. The Heisman winner escapes Cooper’s teammates grasp and he is position to finish the play. The endless motor and relentless effort is what NFL teams are looking for in not only their defensive lineman, but in any player they draft.

If you’re still not a believer of Cooper’s strength, athleticism, movement, or explosiveness: please keep on reading. This is a demonstration of what Cooper can bring to the table as a member of a front seven. If he can be coached up to do this on a consistent basis, he can become a nightmare for offensive lineman. In 1.61 seconds, Mariota is in a hurry and that is where bad decisions, and ultimately turnovers begin.

Since this doesn’t happen often, it’s not a huge concern but one that can be discussed. Cooper engages with the left guard (#72) and cannot disengage. The left guard got the best of him and he did not a make an impact on the play. You would like to see some hand fighting or another finesse move. The bull rush – which isn’t one of Cooper’s specialties my any means, just simply doesn’t work and it won’t work at the NFL level either.

Being so close to the end zone, fundamentals are key. Here, Cooper engages with Stanford’s right tackle and keeps containment. He didn’t record a sack nor did he force a turnover, but he simply eliminated the option of the quarterback to run, covered the receiving back and kept the pressure on the quarterback to make a quick decision.

Cooper is a prospect that comes from a three win school in 2014. They’re success is none the same of this player. With limited options for the backup defensive end spot on the Steelers’ roster, Kevin Colbert and Mike Tomlin could look to replace Mauro’s spot on the 53 man roster. Since this is not a pressing need, a team could really not have too many defensive linemen. If Cameron Heyward or Stephon Tuitt is to go down (assuming Brett Keisel is done), who is to fill in a spot? The third defensive end spot is crucial and Cooper could fit that mold. I have a round 2 grade on him, but I see him going in round 3 due to so many players being ranked and perceived higher than him.