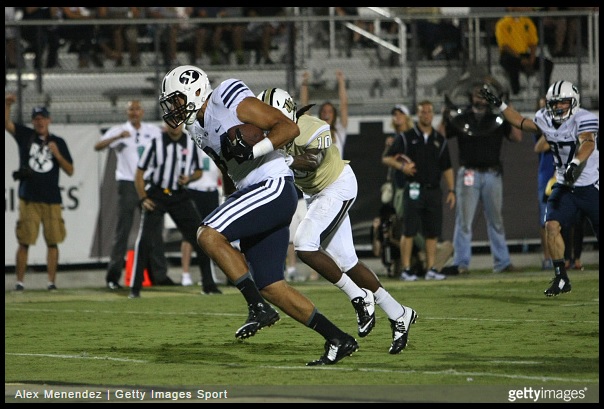 After taking time off to focus on the 2015 NFL Combine, we’re back with our scouting reports. A smaller name player this time but one that carries has some intrigue. BYU tight end Devin Mahina.

– Career stats: 46 receptions, 554 yards, 5 TD
– 2014: 20 receptions, 244 yards, 3 TD
– Only three career games with four catches, never had more than that
– One career game, his final one, with at least 50 yards
– Missed entire 2011 season after undergoing surgery due to a fracture in his neck
– Spent his mission trip in Madagascar, speaks native language of Malagasy
– Four touchdowns his senior year of high school along with six sacks
– Came to program in 2007, 26 years old

Mahina is a lightly touted prospect. I promise there will be day one or two picks coming soon, Arik Armstead and Trey Flowers are on deck. But I like to be well-rounded in my prospects, ranging from first rounders to late day three selections.

But there is something there with the BYU tight end. To preface, it was hard to get a read on him. Because of the Cougars’ personnel sets, his snaps were inconsistent. BYU used a lot of 20 personnel, taking a tight end off the field. If I had to guess, Mahina played only 25% of the teams’ snaps.

He’s a strong athlete who can be a threat down the seam. Like his competitiveness with the ball in the air. Able to adjust to the ball in flight, occasionally making spectacular catches that you’d expect out of a first rounder like Maxx Williams, not a borderline draftable prospect.

Leaping grab behind him against UCF for six.

Plucks this ball away from his body in the bowl game against Memphis. Winds up going for a 41 yard gain. 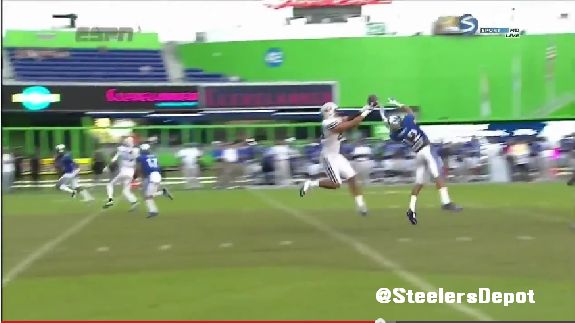 His run blocking needs a lot of work but with his length, he is able to generate a push when down blocking. This one below is probably his best example, sealing the end to create a big hole and a Cougar touchdown. He’s the “Y” tight end, on the right side of the screen.

Though that was an excellent block, Mahina lacks upper body strength to be able to base block effectively. Can get pushed around and can’t hit a moving target in space. Too easily falls off his blocks. He’s at the top of the screen as the in-line tight end, falling off the linebacker at the second level.

Same thing here near the goal line, falling off the linebacker and forcing the tackle to pick him up. Touchdown nonetheless but still a negative mark for Mahina.

You can see him lose his leverage and let the DE win inside below.

The neck injury, though going on four years removed, is a concern and something teams have to trust him medically.

Finding ages for players from this school is difficult but the Senior Bowl, which I trust, lists him at 26. Meaning after his first contract, he’ll already be 30. Big turn off for teams. Of course, it’ll be considered a win if Mahina lasts an entire contract. So in a sense, that point is irrelevant.

As a final plus, I admire his competitiveness. Played in the NFLPA Bowl game and the Senior Bowl this year, held a week apart. That means he practiced for a week, played a game, immediately practiced for the next week, and played in the next one. When he couldn’t contribute on offense, he made an impact on special teams. Served as one of the starting wedgemen on kick returns.

Mahina is considered a seventh round pick or priority free agent by most sites. I’d be willing to roll the dice on taking him in the seventh. That athleticism and size is intriguing and the offense he played in gave him a raw deal. Put him in a system where he can be given the chance to be more productive and he has a shot.

Games Watched: at Texas, at UCF, vs Memphis (Bowl)