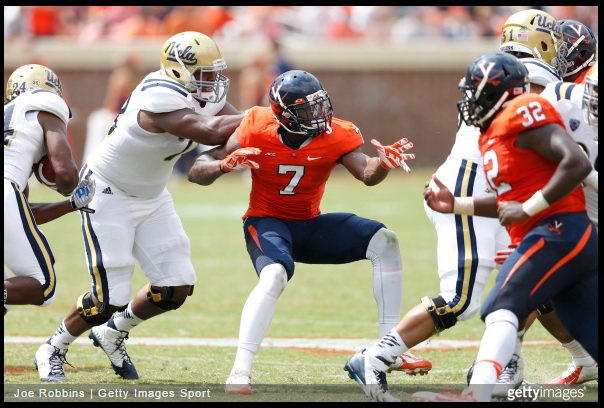 With a huge uncertainty of Jason Worilds’ future with the Steelers, outside linebacker is deemed to be a top glaring need. Arthur Moats and James Harrison are not under contract at the moment which means outside linebacker will most likely be addressed early in the NFL Draft. Today, we evaluate Virginia’s Eli Harold.

-Good use of hands
-Explosive when first step is quick
-Has good length
-Effective in the run game when he keeps containment
-High motor, above average speed
-Willing to throw body around, high effort
-Versatile, played with hand down and standing up
-Stays low, penetrates well
-Pinches well inside
-Young, born in 1994

-Only has a bull rush
-Gets locked on blocks
-Needs to add some strength, gets moved around fairly easily
-Inconsistent snap timing, sometimes slow off snap
-Over-pursues many plays
-Has trouble moving laterally, setting edge
-Needs to wrap up tackles, slips off often

Harold doesn’t possess an arsenal of moves to use against offensive lineman. One move he does well is he takes a hard step outside and then dips inside towards the guard and penetrates to the backfield. Against the run, he does not set the edge well. Tackles and even tight ends keep Harold from moving laterally and setting the edge correctly. For being around 250 lbs., one would like him to display more strength. Some huge advantages to Harold’s game are his motor, speed, and effort. He throws his body around and is relentless to get to the quarterback.

If Harold could use his hands like this on a consistent basis, he could be an elite talent. He attacks the left tackle with a quick first step and swipes his hands down and gets around reaching the quarterback. Even though Harold was late to the quarterback, he still got a hit in and he displayed some good qualities.

If Harold is able to keep containment and leverage on the edge, he will be effective in the run game. He is often washed out or locked onto blocks, but on this play he plays the edge correct and wraps up the ball carrier for a minimum gain.

Harold uses his speed and athleticism to get the quarterback. One of his issues his wrapping up ball carriers and this is another instance of that. He is simply moving too fast and slips off. If Harold sinks his hips and breaks down he could use the proper form to bring down the quarterback for a nine yard loss. Finishing these types of plays are huge, and Harold just didn’t bring him down.

This play will surely get NFL scouts’ attention. Harold engages with the guard and chops his feet quickly. After the quarterback starts to roll out, Harold sheds the block and uses his speed and high motor to chase down the quarterback for a sack. Such relentlessness will not go unnoticed.

This is Harold’s worst flaw, his inability to get off blocks. Here, left tackle Ereck Flowers handles Harold without a problem. Harold is locked onto the block and cannot generate any pressure. You would like to see some type of finesse move to get off the block because the bull rush does not faze this soon to be NFL tackle.

Why Harold doesn’t use this move more often is beyond me. Seems like every time he uses it, it works and he penetrates well. He pinches inside and neither the tackle nor guard can handle the oncoming Harold. When he gets into the backfield he brings his feet to lay a hard hit on the quarterback which almost resulted in a safety.

The same negatives seem to keep reoccurring. Here, his inability to set the edge and keep containment allows the ball carrier to get to the outside for a good chunk of yardage. He needs to move laterally at a faster pace and not get locked onto that tackle. Once Harold gets loose, the runner is already out of his reach.

Here is a picture of Harold’s bend. 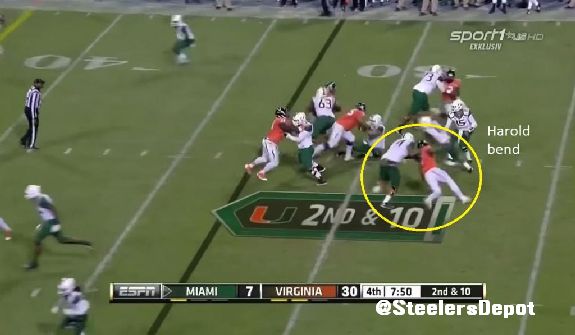 Lining up at the five-tech here, he has an explosive first step and penetrates quickly. When Harold reaches the backfield he immediately wraps his arms around the running back, chops his feet quickly and brings him down with force. Would love to see more of these plays from Harold. At the NFL level he won’t be a five tech, but it is great to see some power from him.

Overall, I was not very impressed with Harold. He shined at times, but was not effective against top tier tackles. He only has a bull rush to his game, which only if perfected can work at the NFL level (James Harrison). Harold definitely needs to add some different moves to his game: swim, spin etc. Offensive lineman and even tight ends did not have trouble holding up Harold and not letting him have any impact. I don’t see Harold as a fit for the Steelers. His best shot at success is bulking up and adding some weight to stay at the 4-3 defensive end spot. I think scouts and the general public is overrating Harold. I would grade him at Round 3, but with the lack of outside linebackers in this draft, he may go in the 2nd. While watching Harold, I was actually more impressed with the other pass rusher, Max Valles. If he could add some strength and some moves to his repertoire, he may have a chance to succeed in the Steelers new hybrid scheme.