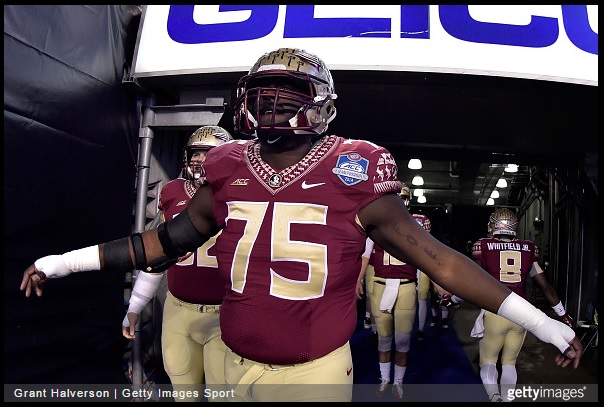 The Steelers offensive line was a major contributing factor to their explosive offense during the 2014 season. Though the Baltimore Ravens defensive line dominated the same offensive line. Despite that poor performance, in all likelihood, the Steelers will line up in 2015 again with Kelvin Beachum, Ramon Foster, Maurkice Pouncey, David DeCastro and Marcus Gilbert starting while Mike Adams and Cody Wallace serve as primary backups.

The Steelers may have their starter but what they lack most on the offensive line is depth. Adams is not long for this team if he can’t show something more. Wallace is an adequate fill-in at center but if he has to start at guard things are going to get ugly. The team lost swingman Wesley Johnson off waivers after trying to sneak him onto the practice squad during the season.

Foster is an unrestricted free agent next year and he is what he is at this point: a decent starter without any upside left. On one hand you know what you’re going to get out of him, on the other you don’t stand to gain anything or improve your line if you re-sign him. The team has to consider other options.

The Steelers will likely look to add an offensive lineman in the draft but it’s unclear if they’ll select one earlier or later. There is one player in particular I’ve had my eye on in this class that could possibly fit the bill for what the team needs. Today we’re looking at Florida State offensive lineman Cameron Erving.

– Great length
– Quick feet. Gets into his pass set quickly
– Very athletic. He can pull and get to the second level of defenders in a hurry
– Excellent football IQ
– Extremely versatile. Has made starts at tackle and center as well as win ACC honors for both.
– He’s fast off the snap
– Utilizes a wide base
– Smooth kick-step

– He doesn’t have great pad level in pass protection. He needs to better use leverage. You see him getting pushed around too much
– Doesn’t have a great punch
– Has trouble with speedy edge rushers
– Needs to get better at sustaining blocks
– He has issues with letting defenders get into his chest
– He’s still raw. He played as a defensive lineman for two years with the Seminoles

– Three star recruit coming out of Moultrie, Georgia
– Had offers from Clemson and Georgia Southern
– First team All-American and First team All-ACC in 2013
– Two time winner of the ACC Jacobs Blocking Trophy (given to the ACC’s best blocker). He won it once as a tackle and once as a center.

Erving is solid but not dominant on tape. He’s got a good motor but he’s not an extremely physical blocker. You’d like to see more of a nasty streak in his game. He needs to play through the whistle.

He is great at mirroring defenders. However, he really needs to work on maintaining his balance throughout the block.

He has the athleticism to be great on the move and in the screen game but he needs to do better with his vision and angles in space.

He has good hand placement and strong hand but he doesn’t do a great job of using his length and extending to keep defenders out of his chest.

He lunges too much and loses his balance. He also has a bad problem with having bad footwork (crossing his feet).

Erving is playing left tackle here and shows off his quick feet. He gets into his pass set swiftly and mirrors the defenders movement. He stays with his man through his spin move but doesn’t use a great punch here.

Here Erving gets beat with the speed rush. He doesn’t extend well and the defender breezes past him to take down Jameis Winston. He has to learn to use his length better.

Decent drive block here that keeps the defender out of the running lane. Erving sometimes struggles with sustaining blocks but he does a great job on this play

Good technique, hand placement, and leg drive on this play by Erving to open a hole. He bullied the defender here.

Erving does a great job here of taking on the defensive lineman and picking up an extra blitzer and gives Winston enough time to get the ball out.

Tough play for Erving to make. He gets hands on the lineman in front of him but doesn’t even slow down inside linebacker Rodney Hardrick who shoots the gap to take down the ball carrier in the backfield.

Good example on this play of Erving anchoring against a defensive lineman and sustaining the block.

Erving is a talented, versatile offensive lineman. He can easily play both tackle positions and center.

He’s not quite athletic enough to be a left tackle at the next level but I think he has the ability to be an above average center or even guard. It’s a bit of a risky proposition because he doesn’t have experience at guard and has a limited number starts at center.

Erving has quick feet, good (but not elite) athleticism, and great football IQ. He only played two years of offensive line in college so he still has a lot to learn about the nuances and technique of the position.

Because of his versatility and athleticism, I think he could rise to a point where the Steelers wouldn’t be willing to draft a potential swing lineman. He has a real chance of going all the way up into the late first round. If he is available in the second round they might be willing to take a shot on a player that could eventually replace Ramon Foster and be a big upgrade to Wallace as a backup center.

He probably won’t end up late in the 2nd round and it’s unlikely the Steelers will take him. However, there’s a fair chance he could end up with a team like Cincinnati or Baltimore who run a lot of zone blocking.