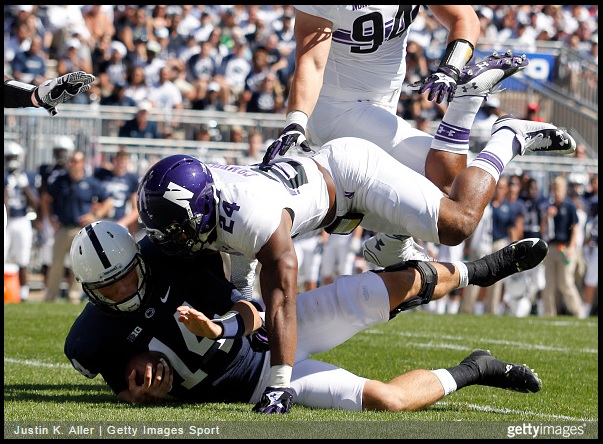 – Questionable range, usually played within ten yards of the LOS
– Below average long speed
– Too aggressive and will go for the kill shot at times, causing him to miss or fall off of tackles
– Must work on angles to the ball, especially against the pass
– Question his awareness, may be late to recognize and diagnose plays
– Dealt with injury issues in 2014, missed four games

Campbell is a classic in-the-box strong safety who packs a mean punch in the run game but has questionable speed to play the pass.

The former was evident early in the first game I watched of his against Cal. Open field tackle and drives the receiver into the ground.

His hits are so violent that he can take himself out of games at times because of the enormity of the collision. Smacks the diving QB, forcing a fumble, but winds up briefly leaving the game. Reminiscent of Ryan Clark.

Although he has questionable speed, he isn’t completely devoid of ball skills. Eleven interceptions in a career is nothing to scoff at. In fact, he’s shown he can make plays on the ball.

But because of that violent nature, he will miss more tackles than you’d like. Either whiff completely of fail to stick to the runner.

Tries to blow up Ohio State QB Braxton Miller in this 2013 contest but harmlessly falls off while Miller picks up extra yardage.

Runner pulls off an impressive spin move but still a miss by Campbell.

He’ll take some questionable angles with the ball in the air as well and definitely looks more comfortable against the run than he is tracking the ball downfield.

Put on the Penn State tape that were only over the Nittany Lions’ passes and it predictably exposed Campbell. Mistimed his jump and ends up being too over top of the throw, not giving himself a chance to make contact with the receiver.

Some moments where I question his recognition skills. Dive up the middle but Campbell still has his eyes stuck in the backfield, ostensibly on the quarterback. Late to seeing the runner. 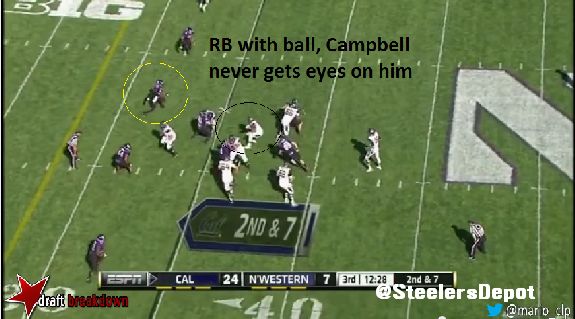 Campbell does a good enough job laterally but lacks the long speed to defend the deep half. It’s something the Wildcats seemed to recognize and didn’t ask Campbell to cover the field vertically. Occasionally rotated as the single high but typically played within the box, playing the Robber and rallying downhill against the run.

Like a lot of mid round selections, Campbell is a scheme fit. Can’t put him in a predominantly Cover two scheme where he will be asked to cover the deep half. Needs to be in a system that runs a lot of “Sky” coverage, Cover 1 with Campbell acting as that Robber. Let him play in the box, bang around against the run, and mask some of his coverage liabilities.

For the Steelers, he fits that scheme.