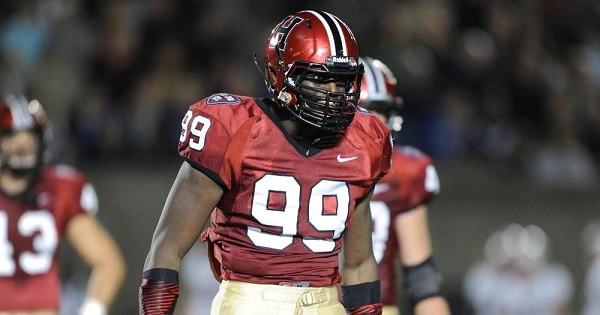 As we get closer to free agency, the biggest question mark is Jason Worilds. Will he be tagged, signed to a long term deal, or will he test free agency? Recent reports say that Kevin Colbert is prepared to let Worilds test free agency. With that said, an evaluation of Zack Hodges.

-Intriguing speed
-Versatile: played with his hand down and standing up.
-Endless motor, always heading for the ball
-Great feel for where the QB is in the pocket
-Has an arsenal of moves, not a one-trick pony
-Has some experience in zone coverage
-Average in run support
-Fluid athlete that can move in space
-Collection of rush moves: bull, spin swim
-Quick first step
-Great upside

-Undersized, would like to see him grow into frame
-Gets held up at POA
-Needs to add upper body strength
-Slow get off, needs a more quick/explosive first step
-Needs to set the edge better – improve first punch
-Gets locked on blocks, washed out of play
-Inconsistent with anticipating snap
-Didn’t go against premiere competition

Hodges has an incredible motor, but that can wear him out if not controlled. This is much more a positive than a negative as he never gives up and will chase down a ball carrier all over the field to make the tackle. With a flashy first step and an arsenal of moves, Hodges could be dangerous if used correctly.
Playing at an unordinary spot here, at inside linebacker Hodges blitzes and really makes an impact on the guard. After he engages with the guard he locates the quarterback and performs a nasty spin move and takes down the quarterback.

Playing at defensive end here, he performs another spin move. Notice how he knows exactly where the quarterback will be when he spins so if the spin is successful he runs right into the quarterback.

At the left defensive position here: after the snap he is immediately washed out of the play because of his lack of upper body strength. He does not set the edge whatsoever and is a non-factor in this play. Although it is unlike Hodges to make a move inside, he needs to have a stronger first punch and hold his own.

Again here, Hodges fails to set the edge due to a weak first punch. Also, he overruns the play and makes himself disappear. He gets locked on blocks too easily and needs to shed to be able to use his athleticism to his advantage.

A huge advantage to putting Hodges on the field is his constant motor and relentlessness. He never gives up on any play. NFL defensive coordinators and head coaches love to see this kind of passion and effort from a player. He has the football IQ and intelligence to know which angles to take and that puts him at a great advantage to make plays.

Here, Hodges gets locked onto the right tackle and cannot seem to get off to make the play. Would love to see a finesse move to change direction, but instead the tackle pancakes him. Hodges needs to put some muscle on to set the edge better.

Can’t help but love his effort here. Extends his arms and moves inside to target and attack the ball carrier for a tackle for loss. Run support is essential so plays like these make you want to see more consistency from Hodges, as you can see his potential and upside.

Hodges displays some cover skills here. He drops into mid field and stays man to man on his target. While maintaining excellent coverage, the hurried quarterback threw it right into Hodges’ body.

Without facing elite competition, Hodges shined. He was the star of the Harvard defense and the Ivy League. Curious to see where he measures in at, he looks lighter than what he is listed at (243). He possesses good speed and uses it to his advantage as he has an endless motor. He played virtually everywhere in the front seven of the Crimson defense, but his place in the NFL is at outside linebacker. He had limited experience in dropping, but his high football IQ and speed tell me that he can be taught and learn quickly. I see Hodges as a day three candidate, but I don’t see him slipping further than the 4th round. I would not take him as my first outside linebacker choice, but as a second. He will contribute greatly on special teams due to his tackling ability and motor. I see him as another Howard Jones, so I’m not sure that the Steelers go this route. I could see Keith Butler wanting Hodges for his versatility and speed, so the 5th round seems fitting for the Steelers to bite on him.