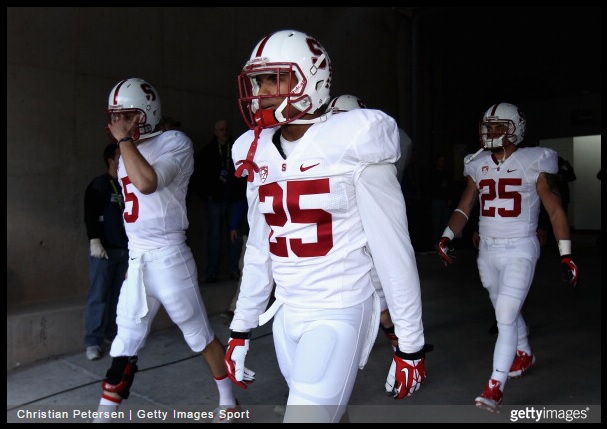 Today we have another top-rated cornerback for you to look at as Standord’s Alex Carter is our subject.

– Prototypical size, build to play outside
– Best in off coverage and in zone
– Played outside on both sides
– Not afraid of contact and willing run supporter
– Shows good football IQ, rarely out of position
– Shows adequate downhill burst
– Disciplined player
– Respected and not tested often in tape watched
– NFL bloodline
– High effort player
– Strong character
– Played three seasons at Stanford

The Steelers will obviously address the cornerback in the draft and Carter is certainly the kind of cornerback that they will be looking for. I watched three full games of Carter from 2014 prior to compiling this report and cut 17 gifs, which is way too many to post here.

A Steelers cornerback is expected to be physical and help out against the run and Carter showed plenty of times in the three games that I watched that he’s not afraid of contact.

In this clip you will see him stick his face in the fan as he takes on a pulling guard. He ducks the block and makes the run tackle.

This might not seem like a big deal, but on this play Carter actually prevents a touchdown as he escapes his blocker at the goal-line and takes on the running back, who winds up stepping out of bounds because of contact.

Watch the effort and angle on this explosive running play as Carter comes from the opposite side of the field to make the stop. Once again, this might not seem like a big deal, but I bet it gets noticed by scouts when they watch his tape.

Even though he’s not afraid of contact, Carter will need to improve his tackling technique at the NFL level. He’s at his worst out in space and more than once I observed him missing tackles like the one below. Often times he will duck his head and lose sight of what he’s attempting to hit. I think he can improve in this area.

Carter is a little slow in his break forward here, but he manages to wrap up nicely.

Here he does a better job and I view him as more than adequate when diagnosing these short throws underneath.

You will enjoy both of these red zone plays against Carter as they tried to test him on back-to-back plays.

Carter certainly needs to work on his footwork at the next level and I believe these two clips show you how choppy he can be at times with his feet.

A better throw here and this play might go for a touchdown. Instead, Carter gets his head around and makes the interception.

Eyes in the backfield and good recognition almost results in another interception.

Several times Carter showed that he’s probably not best suited to play a lot of press-man coverage. At the top of the screen and in the slot, Carter is very slow reacting at the snap.

Easily separated from at the bottom of screen on this play and thankfully he was bailed out by a poor throw.

I apologize if this page loads a little slower than normal because of all of the gifs but I wanted to give you good look at Carter.

As I mentioned at the beginning of this post, Carter has everything that the Steelers look for in a cornerback. This week at the combine I look forward to seeing what kind of numbers Carter registers in the 40 and the short shuttle. It was hard to get a good sense of his long speed, but several think he will turn in a sub-4.5 time. I’m not expecting his shuttle time to be great, but perhaps he will prove me wrong. He’s not overly athletic, but that’s alright. I sure hope he measures in at his listed height.

I view Carter as a top five or six cornerback in this draft. While I do not think he will be drafted in the first round, it’s hard to imagine that he will still be on the board when the Steelers pick in round three. If he’s still on the board in the second round, I can see him being the selection, assuming the team didn’t address the position in the first round.

Several have noted that Carter could easily make the move to safety at the NFL level should he struggle at cornerback. I agree with that assessment but believe he has what takes to play outside with the Steelers.

Projection: 2nd to early 3rd round

Games Watched: vs USC, vs Oregon State, at Oregon, at Notre Dame