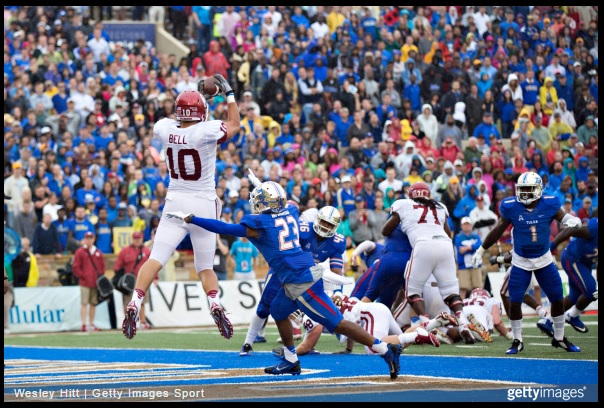 Being as the Steelers look like they are interested in drafting another tight end this year, we’ll take a look at Blake Bell, a former quarterback that will likely be a late-round selection.

– Father Mark Bell played tight end in NFL and uncle played defensive end
– 4 touchdowns in 2014, second-best on the team
– Drafted by the Detroit Tigers in the 43rd round of the 2010 MLB Draft
– Originally played QB and threw for 1,648 yards and 12 TDs in 2013
– Winner of Oklahoma’s Bob Kalsu Award
– Named Academic All-Big 12 Second Team
– Played in 43 games while at OU

Before looking at Bell’s tape it is important to remember that he only played one season at tight end after previously playing quarterback.

For a tight end, Blake appears to move and function well out in space and you can see him leading the way outside in this play below. He easily takes care of the safety and it results in another 9 yards being gained.

As an in-line blocker Bell did show that he can be effective when he gets out of his stance and uses his long arms and big hands properly in addition to getting good leg drive. Here he is controlling the edge at the bottom of the screen and it results in a touchdown.

Here is another example of Bell as an in-line blocker in a short-yardage situation. While he does get a little too upright, he manages to help drive the defender backwards.

As expected, Bell did struggle with angle and reach blocks during his first year at the tight end position. Here he is as the inside tight end at the top of the screen and you can see that the defensive lineman beats him to the gap to make the stop.

There will also be times where Bell slips off of blocks and here he is at the bottom of screen doing just that.

Bell’s pass protection really looks adequate and you can see him at the top of the screen control the outside rusher. He has a nice base here and has those arms out in front.

Bell only had 16 receptions in 2014 and four of those went for touchdowns. He appears to have good hands and two of his catches are below. Both are outstanding. However, as a route runner he needs a lot of work.

This last gif I am using to show you multiple qualities that Bell has. For starters, look at the score and time in the game. Bell is still giving maximum effort. Second, you will notice he is being used as an h-back and put on the move in this split-zone run. Third, look at the wallop he delivers to the linebacker.

Im not going to try to oversell Bell because he is what he is right now and that’s a developing tight end that needs NFL coaching and a weight-room. However, for only playing the position for one season he has impressive upside. As a former quarterback I’m sure he has a solid understanding of the game and that’s a plus. Remember, Heath Miller was also a former quarterback.

You can’t teach size and that’s one thing that Bell has going for him. This weekend at the combine I will be looking forward to studying his entire workout and that definitely includes his 40 time. He only did 14 reps on the bench so it’s obvious he needs to get more upper-body strength. He should be able to fill out a tad more even though he’s already 23 years-old.

At worst, Bell will be signed by a team as an undrafted free agent, but I have a feeling he will be drafted in the last two rounds. Can he play special teams? He’ll need to if he’s going to make an NFL roster as a rookie. He’s far from being the next Matt Spaeth when it comes to blocking, but if you put on his tape against West Virginia and compare to the final two games of the season, you will see that Bell improved drastically over the course of the season.

Projection: 6th to 7th round