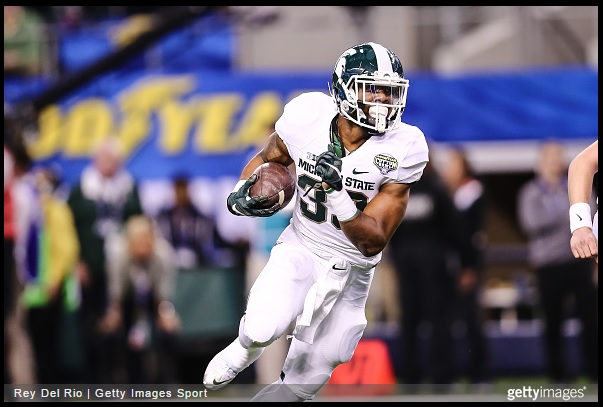 With Le’Veon Bell with no true back-up, a running back will either need to be signed from free agency or drafted, so the Steelers will be set to start over to look for Bell’s new sidekick. Depth is needed, so we will profile Jeremy Langford.

-Has a well-built NFL frame
-Great change of pace back
-Excellent in pass protection, natural with understanding where pressure is coming from
-Has speed, ran fastest 40 at NFL Combine (4.43)
-Very good hands, watches the ball in
-Hits second gear in open field
-Above average route runner
-3 down back
-Downhill runner, can get behind his shoulder pads through garbage at the line of scrimmage
– Breaks many tackles, has a great stiff arm

-Footwork needs to get quicker when making cuts
-Needs to diagnose defensive movement post-snap behind the line of scrimmage better
-Not a “home-run” back
-Takes a second to get his wheels under him
-Doesn’t accelerate through contact, usually gets what is blocked
-Awareness level not where some may want it, indecisive at times
-Had a very pedestrian week of Senior Bowl practices, was outshined

You can tell that Langford emulates a lot of his game from Le’Veon Bell. He shows the same patience and running style and is a great pass catcher. While Langford breaks many tackles, he isn’t as nimble on his feet as you’d like. He gets tripped up rather quickly. He hates going down and is a real workhorse.

With excellent blocking, Langford quickly breaks this run to the outside for a long run. He shows off his vicious stiff arm and speed but can’t quite get to the end zone.

Langford shows off his aggressiveness and willingness to be a successful pass blocker. With a linebacker shoots the gap unblocked, he is easily picked up by Langford and the play result is a touchdown.  OSU

Langford gets the handoff and slow out of his get up. He picks the correct gap but doesn’t accelerate through fast enough and is tripped up for a short gain. Would like to see more commitment to the gap and see him shoot through it with some power and quickness.

It is evident why he ran the fastest 40 time in this GIF. He bounces this run out and beats most of the National Championship defense to the outside for a good gain. He surely shows off his speed and patience here.

On third and long, Langford lines up as wide receiver and runs a good route to the outside. He uses his soft hands to make the grab and get the first down for the Spartans. The Steelers love guys like this, as they use Bell in the same way.

Here, Langford fails to see the hole open up and develop on his counter side. He runs into the Ohio State defense and loses a fumble on the play. His blockers were both to his right and you would like to see more awareness here.

Showing the hole available to counter to, doesn’t see it.

Love the downhill running and patience you see here by Langford. Bounces it to the right, follows his blockers, and puts some moves on defenders to get the first down. He shows his elusiveness and aggressiveness as he is difficult for the Baylor defense to bring down.

Another instance where there was a hole on the backside and Langford didn’t see it. He could have also bounced the ball outside but decided against it. This isn’t a terrible decision by him but the Baylor defense played it well and kept him to short yardage.

This is the explosive plays you want from your running backs. He is patient as the gap opens up and he accelerates quickly through into the open field. His 4.43 speed is on showcase as he sprints up field. Running on the weak side of the field he runs out of real estate but it’s a great effort for a long gain.

There’s not much to dislike about Langford. He is not one-dimensional in any way. He is a threat in the run and pass game. He can catch the ball and protect the quarterback with his excellent pass catching ability. He may be the best pass protector in this draft. While he did run the fastest 40 out of the draft, he doesn’t always play as fast. He needs to accelerate through holes faster and use his power on defenders instead of absorbing hits. He also needs to improve his vision and awareness, but if he is under Bell’s wing, I can see that dramatically improving.

As for the Steelers need at the running back position, the jury is still out on Josh Harris, and Dri Archer is still without a true position and cannot carry a workload. LeGarette Blount didn’t work out as the free agency signing from last year and may dip into the free agency pool this year. The Steelers will be very intrigued by Langford because is an all-around polished back that can be used close to what their own Le’Veon Bell is used for. He is also a change of pace back that can use his speed and power to get the tough yards or for passing situations. If Bell needs a breather, Pittsburgh wouldn’t be losing Bell’s style as Langford’s style is close to his. He could be on the Steelers radar in the 4th– 5th round if they don’t find their guy earlier.