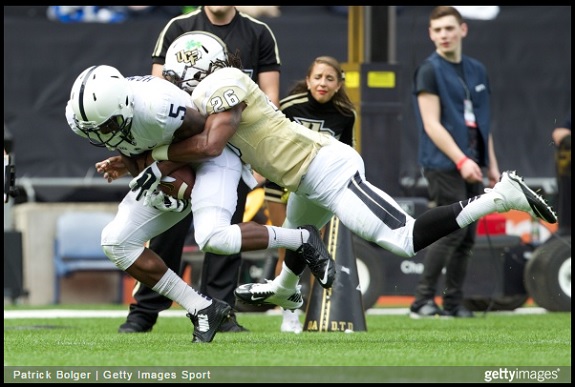 – Prototypical size for the position at the next level
– Thunderous hitter, as physical as they get
– High football IQ, diagnoses plays quickly, plus instincts
– Quick close to the football
– Uses length to make plays on ball in the air
– Against the pass, takes good angles to the football
– Capable of wrapping up in the open field, strong, reliable tackler
– Can play anywhere on the field, wasn’t limited to one area
– Lots of special teams value, multi-phase player, even in 2014
– Productive career, strong senior season
– As much starting experience as anyone else in this year’s draft

– Inconsistent angles in the run game
– Lacks makeup speed, average when running in a straight-line
– Some stiffness in his hips, change of direction
– Could stand to lower tackling angle a bit, tad too high
– Statistically, not a ballhawk, three career interceptions

Geathers has to be one of the most vicious hitters in this entire class. You’ll start to watch the GIFs below to learn about him but you’ll keep watching just because of the smile they put on your face. In all of the three games I watched, he produced at least one bone-jarring hit.

He also uses that strong upper body to wrap up receivers in the open field. Not a feast-or-famine type hitter. 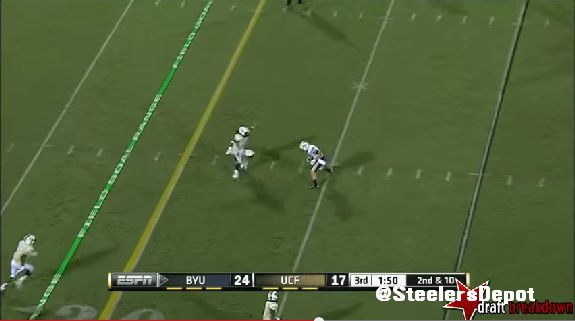 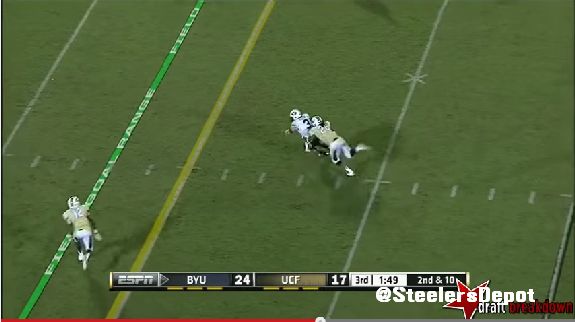 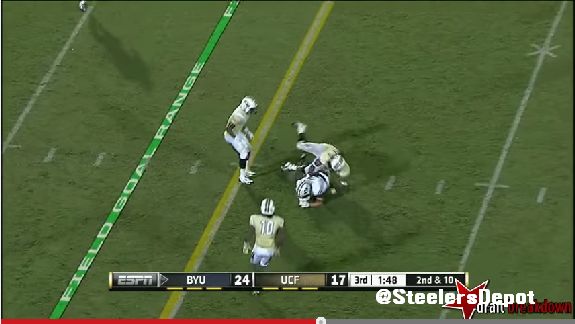 Though he isn’t particularly fast, Geathers shows plus instincts, allowing him a great jump on the football to make the tackle or occasionally, an interception. How he recorded his lone INT in 2014.

As I noted, he isn’t a ballhawk statistically but 30 pass deflections in a career is nothing to sneeze out. Understands route concepts, helping his angles to the ball, and he shows the length to play the pocket and break throws up. They’re not as flashy as turnovers but still a critical component of the position. 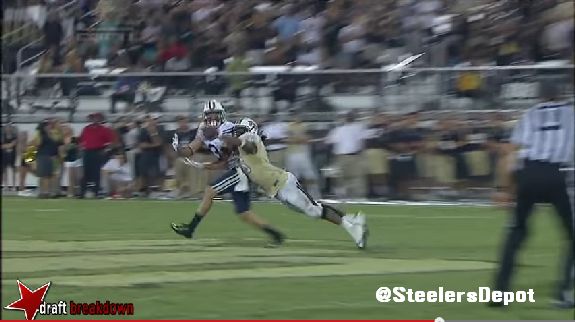 Geathers is, of course, not without his flaws. His 40 time was nice for his position at the Combine but I’m not blown away by his speed on tape. Naturally, bigger guys aren’t running as fast.

He needs to clean up his angles, especially when rallying downhill to the runner. Where it becomes most exposed – his angles to the ball against the pass are actually pretty good. And he lacks the makeup speed to recover after a poor angle.

Shoulders are parallel to the field so when the back changes directions, Geathers couldn’t follow suit, causing him to fall off and miss. 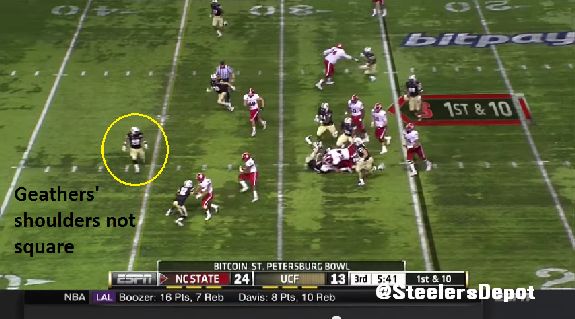 Odds are Geathers won’t be a Day One starter wherever he lands but you can bet he’ll start on your special teams unit. In 2014, he was used as a wing on punt coverage, a blocker on the punt return unit, and use on the field goal blocking group. Will be a multi-phase guy Week 1 in 2015.

And unlike a player like Ibraheim Campbell, who we profiled a few weeks ago, Geathers wasn’t strictly used as an in-the-box defender. Player the deep half, single high, and rolled into the box. Schematically, I don’t think he’s limited the way a guy like Campbell might be.

That fearlessness to hit and good enough ball skills make Geathers a solid prospect. A player who could go a round above where he’s being projected.

Games Watched: at Houston, vs BYU, vs NC State (Bowl)