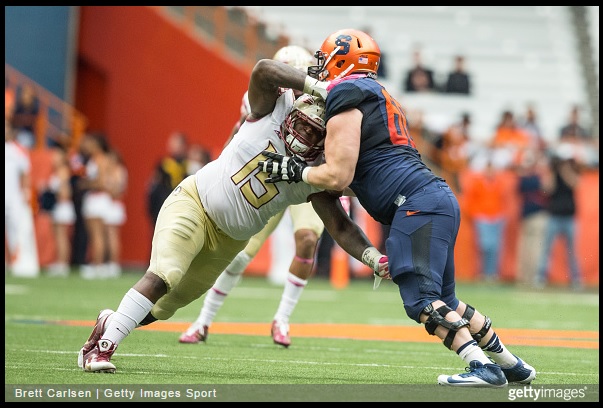 – Above average run blocker who generates a good push
– Good upper body strength
– Uses angles to his advantage in the run game
– Strong hands who is capable of sticking to his blocks
– Shows a decent burst off the line in his kickslide
– Technician in the run game and shows good base initially in pass pro
– Proper hand placement and arm extension in both phases
– Heady player, capable of picking up stunts
– 2013 tape better than 2014, dealt with injury senior year
– Lots of starting experience under his belt
– Experience at both tackle spots

– Can’t find dominant trait
– Build is just average, slightly below average arm length (32 3/4 inches)
– Struggles to mirror after initial set, tends to double-over and fall off
– Overall, just average laterally and an ok athlete, probably will have to kick inside at next level
– Inconsistent at engaging at the second level
– History of knee injuries
– Nagging injuries throughout his career

I hate to use such negative sounding terms for this process but Hickey just screams as a “meh” prospect to me.

But as always, we’ll start with the good. He does show some nasty in the run game. Above average upper body strength who seeks to finish his blocks. There’s a reason why he got all those pancakes in high school. Here’s another in the Orange’s 2013 bowl game against Minnesota. Hickey is at left tackle.

And here he is driving Vic Beasley into the Earth.

Though he did play nicked up in 2014, Hickey is generally regarded as a tough kid who played through the pain along an offensive line that dropped like flies in 2014.

He has experience at both tackle spots, seeing action on the right side the final nine games after former Syracuse first rounder Justin Pugh returned to play the blindside. If he learns to play guard, he’ll have a lot of versatility for whatever NFL team scoops him up.

He’s not the worst athlete but got exposed on an island at left tackle. There is some short-area quickness to his game, and as you’ll see below, he can mirror in confined spaces against a quick inside move.

But put him out on the edge against an inside counter, Hickey starts to lose his base, double-over, and fall off.

Has to hold his block longer and winds up doubling over against the Clemson right end, falling off and allowing the sack.

Loses his base when asked to try and seal the edge. Sloppy technique, as we show in the screenshot below. 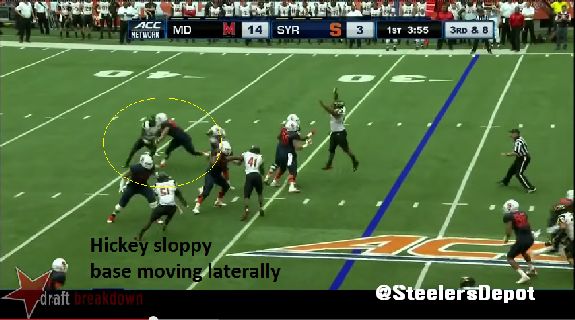 Touched on it before but Hickey profiles as a guard at the next level. Probably doesn’t have the lateral agility to stay outside. Better run blocker than pass protector. Some scouts think he should go to a zone blocking scheme but I think Hickey could do well enough in a power or zone scheme.

The Steelers have shown interest in the Orange alum and like most teams, think he will kick inside. An excerpt from an article on PennLive.com last month. Hickey met with offensive line coach Mike Munchak at the Combine.

“Munchak asked Hickey about his ability to play guard and Hickey said he felt like the Steelers were interested in him at the position.”

But Hickey lacks that dominant trait in any area that makes me think he can be anything more than a swing backup in the league. Even as a Day Three selection, you’d like take a guy who in a best-case scenario, can start in this league. Not sure that’s evident in Hickey’s tape. Unless the value was really good, a prospect I’d be inclined to pass on.