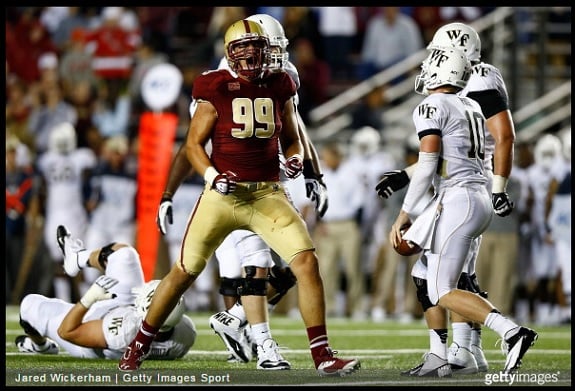 – Unusual, interesting frame, and though on the tall side, great length and certainly looks the part
– Shows some upper body strength to hold POA, avoids getting run off the ball
– Surprising initial step, relatively quick out of his stance
– Good effort player, runs hard to the football
– Naturally too tall at times but tries to get low and shows better leverage than anticipated
– Decent bull rush, length and power occasionally allows him to win
– Strong side end with experience playing on both sides of the line
– Schematically versatile, projects to be able to play in an even or odd front

– Marginal athlete, struggles to flow down the line
– Uncoordinated, on the ground far too often in both phases, taking himself out of plays
– Poor hand use, slow to disengage in run and pass
– Doesn’t show strength you’d expect, can hold POA but rarely gets penetration
– Provides too few impact plays
– Stiff change of direction, very tight-hipped, best in a straight line
– Ineffective pass rusher who only has a marginal bull, virtually no repertoire with slow hands and poor punch the few times he attempts to shed
– Has shown himself to be late to find the football, questionable awareness

Mihalik is a polarizing figure with rare height, weight, and length, though I haven’t been able to verify his exact numbers. On the surface, it creates the thought of a prospect who can create separation between his blockers and in general, be disruptive with his length.

I do like his burst off the ball. Quick out of his stance, something I wasn’t sure if I was going to get from a tall, heavy player. But there’s a hint of explosion to his game.

He occasionally flashed that combination of length and strength. When he gains some momentum, he has the upper body strength to pack a punch. Blows the Florida State right tackle back with his strength and arm extension, running through to the quarterback.

Though a limited athlete, he gives max effort and runs hard to the ball. There’s something endearing about a big man who attacks the football in space.

Makes the tackle on the back running a swing route in the GIF below.

But that caps his highlights. Not much else to his game I like. He has that initial quickness but is a lumbering athlete when asked to move down the line or change directions. Neither particularly surprising given his frame but negative nonetheless.

See it against the pass and versus the run. Former and latter shown below.

Unable to flow down the line or shed the block of the tiny Nick O’Leary to defend this inside zone.

And here’s Mihalik on the ground, unable to make the tackle near the goal line from this position. Running back finds paydirt. 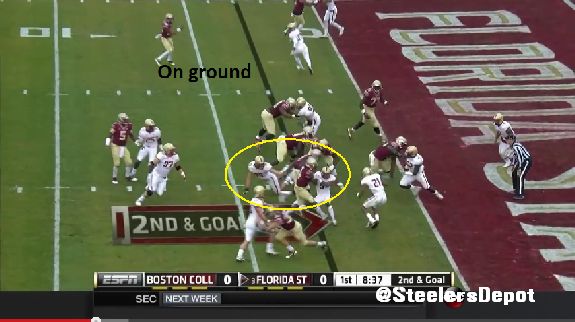 See this too often. Can’t win from the ground. He’s an uncoordinated player who struggles to maintain his balance.

He did showcase strong instincts on one play, reading a RB screen and recording an interception against NC State, but overall, seems late locating the football. Not a promising combination for a player who will never be able to use his speed to close on the ballcarrier.

There was one report of the three games he missed in 2012 was from nerve damage though I was unable to corroborate that. If that’s true, it’s something that will need to be re-examined medically, even if it happened more than two years ago.

Mihalik didn’t begin to receive substantial playing time until his junior year meaning he has yet to reach his ceiling. Although it’s fun to think what a 6’9 player could be, Boston College seems to annually trot out at least one player that resembles an NBA power forward, but Mihalik falls short once you put on the tape.

He’ll make it into an NFL camp but I wouldn’t even put a draftable grade on him. Bummer.