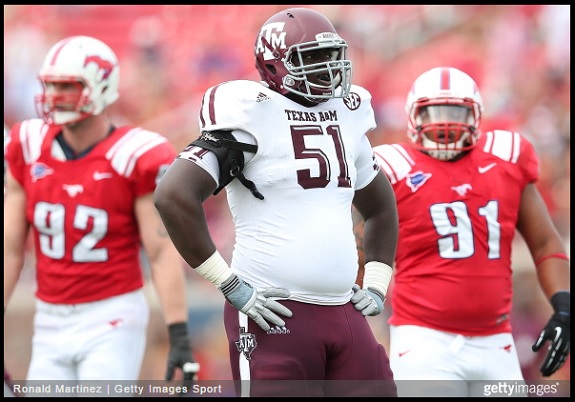 – Big, strong, sturdy frame with good length (33 1/2 arms) and big hands (9 3/4)
– Good upper body strength, generates a good push in the run game
– Forceful upon contact, strong hands, and like his punch as a run blocker
– Sticks in the run game
– Short-area quickness as a run blocker, some ability to pull
– Sets his hips well as a run blocker
– Strength to anchor in pass protection
– Works to get his arms extended
– Shows proper hand placement
– Guard/tackle experience
– Lots of starting experience
– Played against top competition

– 38 career starts for Aggies
– Two career starts at left tackle, both coming in 2014
– Missed start of 2014 season recovering from offseason shoulder surgery
– Underwent shoulder surgery in offseason prior to 2012, too, unknown if it was same shoulder/injury
– Suffered calf injury during 2013-2014 bowl game against Duke
– Never named to any SEC All-conference team
– Didn’t begin playing football until junior year of high school

Harrison was overshadowed throughout his career by big names at skill positions – Johnny Manziel and Mike Evans – and his fellow lineman – Jake Matthews and Cedric Ogbbuehi. He doesn’t have that first rounder shine, but he’s a talented guard in his own right.

At 330 pounds with good length, he can be an impact player in the run game.

He can base block, stick, and keep lineman from flowing down the line. Harrison is the LG below.

Or pull and knock your head off.

But he clearly excels as a run blocker more than he does in pass protection. As is the case with lineman, especially big ones, he’d rather attack than react. His pass protection isn’t terrible, the team would have never even trotted him out at left tackle if it was, but he will get exposed moving laterally against quicker defensive tackles. Slow-footed and have seen him double-over, falling off his block.

I watched him against two odd fronts, meaning he didn’t always have a defender rushing directly over him. Saw a lot of three man rushes. In those situations, a guard is taught to “find work,” help out his tackle after it’s obvious there is no LB blitz or stunt. Harrison could be a little more active there.

Doesn’t look to help the left tackle. The Ole Miss DE wins inside, pressures the QB, and it results in an interception and pick six.

It was difficult to determine exactly how many starts at each position Harrison got. Couldn’t find much information that delved into that, though I could’ve easily missed it.

He has at least four starts at right guard, two at left tackle, and ostensibly, the rest at left guard.

The shoulder injury does concern me a lot. First flared up in 2012, played hurt the final few games of the 2013-2014 season, and went under the knife before this year began, causing him to only start seven games. He obviously had to get his shoulder healthy but dealt with conditioning issues that sidelined him longer as he got back into shape post-surgery.

In the game I watched of Harrison at tackle, it was difficult to evaluate him. Very Auburn-like scheme where the front side end was typically unblocked. Meaning Harrison didn’t kickslide often in pass protection. And he down blocked/combo blocked in the run game.

Harrison is one of the many Day Three offensive line prospects who offer versatility, something teams like the Steelers pride themselves on having.

The medical just has to check out. I wouldn’t be shocked if there were teams that took him off because of it

He isn’t an ideal fit for zone schemes, flowing quickly down the line, but this is still a team that runs a lot of power concepts. And that keeps Harrison an option come draft day.