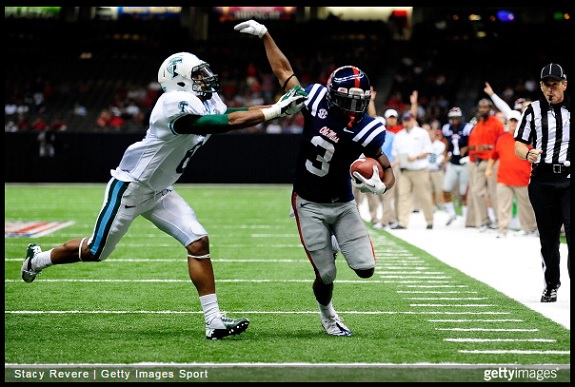 With limited tape and inconsistencies in Doss’ play, it was difficult to generate an accurate opinion without being naïve. Teams tended to not throw to doss within 8 yards. This is due to his physicality at the line of scrimmage. They challenged him in the vertical game, as he is only 5’10. His run support needs to improve in tackling, angles and urgency.

Here, Doss uses the boundary to his advantage as he has done many times before. He squeezes the wide receiver towards the sideline so the quarterback must throw a perfect ball for it to be completed. Here, he stays with the lengthy receiver and puts himself in great position, causing the quarterback to overthrow the ball.

There are some questions in Doss’ long speed. He sometimes can’t keep up or switch into another gear down field. Here, the wide receiver runs right past Doss and he can’t keep up and safety help is needed. Even though the pass wasn’t completed here, in the NFL, quarterbacks pray for throws like these.

What I love about Doss is his ability to stay with receivers and run their route for them. He does this here, as he stays attached to his assignment’s hip and then jumps the route for the interception. He displays good hands, which we know he has since he played wide receiver in high school. Right after the receiver makes his cut, Doss’ eyes are on the quarterback and he knows he has a chance for the ball. He did everything right here. 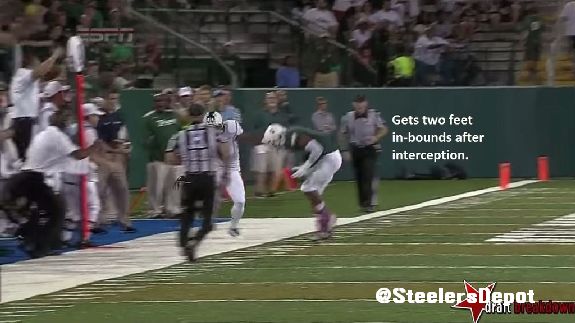 Not the best angle (thanks camera-man), but Doss had to get off a block to get to the ball carrier. He uses good form by sinking his hips and driving through his feet. He delivers a hard hit and the running back only gains a few yards. Would like to see this from Doss more often and more consistently.

After the snap, Doss does his job and secures his man. When he reads run (which is quite quick), he runs to his teammates aid. In this process, he takes a poor angle and isn’t involved at all in the tackle. It seems like he just wanted to be the safety valve just in case he slipped away. Can’t do that. In the picture below I will show you the angle he should have took. 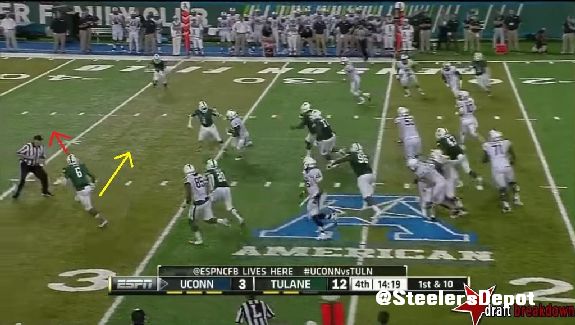 Talk about a feast or famine play. (Means: the player takes risk and comes up huge, or takes risk and bites the dust) Doss shows great technique in mirroring the wide receiver and again, running his route for him. After the ball is thrown, it looks like Doss got his left hand in the way of the receiver catching the ball. Even though Doss showed great technique, if the receiver would have optioned to go outside, Doss may have been in trouble. Great play here though.

Overall, I am not overly impressed with Doss yet I’m not scratching his name off of my board. With some good coaching and a few years sitting and handling him as the Steelers did with Cortez Allen. Looks like another project for Carnell Lake. Doss wouldn’t be my first cornerback picked, but I would be comfortable with him as my second. He has great hands and great instincts. Not afraid to be physical at the line of scrimmage and can be over aggressive at times. He is inconsistent with his speed and his angles. Sometimes his long speed is great and he hangs with receivers well, other times he is behind five yards and loses security. The angles he takes are sometimes precise and other times are just to be a safety valve (as shown above in the article). The lack of competition doesn’t concern me, but the consistency does. He had seven interceptions in 2013, and just three in 2014. Maybe because teams started to avoid him. He is not flashy, but he could be coached up easily. Teammates call him a “workaholic”; he doesn’t miss practice and plays through pain. That is music to every Steelers fan’s ears since both Terry Hawthorne and Shaquille Richardson didn’t get to display their talents due to injury. I could see him being the second cornerback selected and in the fifth round, as the Steelers tend to do.

Here is a tweet from Lance Zierlein from the last day of the NFL Combine. Take this as you will.

Tulane CB Lorenzo Doss rocking a Steelers skull cap as he boards our plane. Makes plays on the ball.