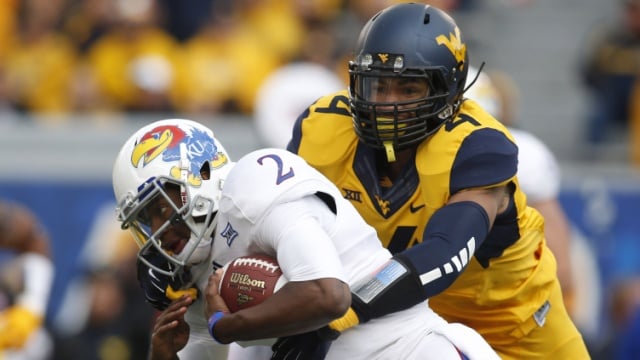 – Intriguing size and appears to have plus length
– Above average athlete who possesses a solid get off
– Closing speed and gives good effort, shows ability and willingness to flow down the line
– Serviceable swim move, best asset in repertoire
– Miscast as a 3-4 DE, would except some level of improvement at a new position
– Timed well and metrically, looks good on paper
– Statistically fine senior season, led team in sacks
– Made jump from FCS to FBS without severe loss in production

– Gumby body, lacks muscle and has skinny legs
– Undeniably weak upper body who habitually struggles at the POA, washed too easily and not an asset stacking and shedding against the run
– Combines it with poor hand placement, plays too high and struggles to out leverage blockers
– Consequently, on the ground too often
– Lacks hand use, punch isn’t violent enough and overall, doesn’t use them consistently as a pass rusher
– Doesn’t seem to have a plan off the edge, easily pushed up the arc
– Disappears too often on tape, to the point where team sometimes used him solely as a situational, third down pass rusher
– Statistics inflated one-gap by scheme and “free” rushes due to offensive blown assignments
– Nearly exclusively played one position and rarely dropped into coverage, will have to learn how to play with his hand up
– Athleticism doesn’t translate onto the field

– Began career at Gardner Webb, played four years and graduated, transferred to West Virginia in summer of 2014 for senior season
– Two year starter at Gardner Webb with 16 starts
– Named FCS All-American in 2013, finished with 19 TFL and 8.5 sacks
– 2014 with West Virginia: 11 TFL, 7 sacks, latter stat led team by wide margin
– Edge SPARQ grade is 5th in class, ahead of players like Eli Harold and Randy Gregory
– Ran a 4.59 (1.57 10 split) with a 36 inch vertical at his Pro Day

Because of his SPARQ numbers, a measurement used to quantify a player’s athleticism, Riddick caught my – and many others – eyes. Why I looked to him in the first place. After combing through three games, I came away awfully disappointed.

But we’ll start with the good, as we always do. Nice closing speed to track the Baylor QB down from behind. Riddick is a long strider and plus athlete. Pro Day numbers help back that up.

Statistically, had a fantastic career at Gardner-Webb and the numbers translated to West Virginia. Caveat to that is their scheme and some easy “wins,” – if you can even call it that in some instances – where he took advantage of an obvious blown assignment from the offensive line. Blitz creates chaos and Riddick is left free. Two of his three sacks against Baylor come versus blown assignments. 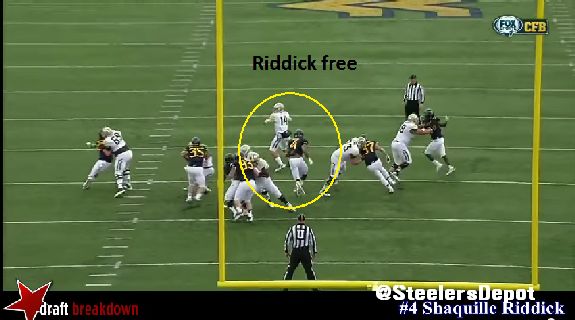 That’s where the good ends and the bad begins. To preface, Riddick played as a 3-4 DE at under 250 pounds. Less than ideal and it’s no surprise he tended to get banged up against the run. But he failed to even show a glimmer of hope in a confined space. As an OLB, he’s still going to set the edge and take on the tackle. There are no automatic, free passes.

A couple examples below. Watch this pulling guard blast Riddick, drive him back, and take him to the ground.

Left tackle seals him and Riddick can’t shed as the running backs flies past.

Seriously, look how skinny this dude is. No leg muscle. 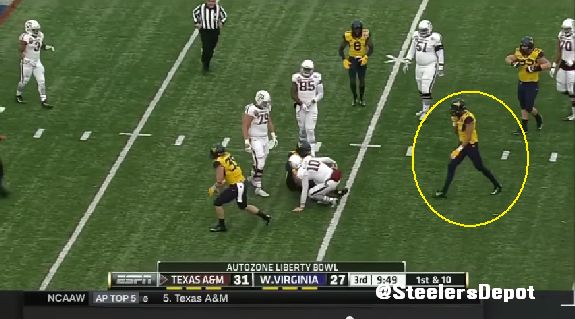 You’d hope he’d be more effective as a pass rusher but the tape doesn’t reflect it, either. Leveraged and knocked back. Riddick is working as the RE.

He has slow, ineffective hand use that must become more consistent in order for him to stand a chance at the next level.

At left end in this clip, he shows an acceptable get off but turns around on an apparent swim move. Completely ineffective and he winds up in the grass.

As I’ve written, he doesn’t have a plan around the edge. Again, at right end. Anyone want to clue me in onto what his goal was here? Feigned hand use and then run up the arc, taking himself out of the play.

The team recognized his issues, too. In watching him against Oklahoma, he saw less than ten snaps. Only used on third and long, an obvious passing situation.

He isn’t being billed as a top-end pass rusher, not even close, but still, I was expecting much more than that. He’s a good athlete who got by with it at the FCS level, then used the Mountaineers’ scheme to help mask his flaws.

I would need convinced to put a draftable grade on him. Would much rather have him as a UDFA where I have a whole lot less money invested in him. He is a “Great Wall of China” type prospect that I can’t use a selection on.

Games Watched: vs Oklahoma, vs Baylor, vs Texas A&M (Bowl)