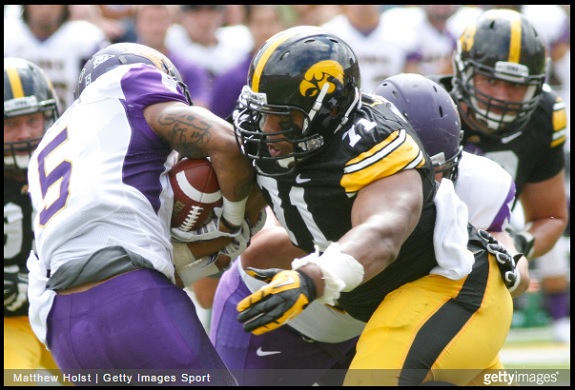 A look at a potential defensive end prospect for the Steelers. Iowa’s Carl Davis.

– Fills out his frame well, broad shoulders and as good of a combination of length and hand size as you’ll see (34 5/8 inch arms, 11 hands)
– Much better than anticipated athlete, flashes an excellent first step that is backed up by his time (1.73 split at Combine)
– Penetrator who can be disruptive vs run and pass, though more often the latter
– Big, active, strong hands who creates a forceful punch on contact capable of knocking lineman off their base
– Varied array of pass rushing moves, swim is his best but offers a rip and spin
– Relentless pass rusher who doesn’t quit on the play, earns his pressures
– Good effort player capable of moving laterally and flowing down the line
– Shows awareness as a pass rusher, reads the quarterback’s eyes and gets his hands up to bat passes down if he can’t get to the QB
– Complex defense that asked him to slant and stunt more than most in the nation
– Solid senior season

– Almost stunningly bad against the run, severe liability
– Relies on first step, easily taken out of the play if he doesn’t time the snap count
– Must get his arms extended much more consistently
– Routinely fails to stay square to the line of scrimmage, leads with shoulder and easily sealed
– Washed out of the hole and on the ground vs the run too often
– Less upper body strength than you’d like, has trouble anchoring and holding point of attack
– Predictable lack of short-area quickness, hindering his ability to turn pressures into sacks, reflected statistically
– Overall, lacked gaudy numbers

Davis is the opposite of what I was expecting. A prime example of why biases must be left at the door when scouting.

Though his sack numbers were never, and probably will never be, anything notable, he’s a plus pass rusher that generates a lot of pressure. It doesn’t show up in the box score but can be just as effective as a sack.

Davis’ first step perhaps surprised me the most. It’s worth noting he often lined up closest to the line of scrimmage, inches away from encroachment, but that initial get-off still wasn’t something I expected.

You see it well in the picture below. Crossed the line of scrimmage and engaged before anyone else. 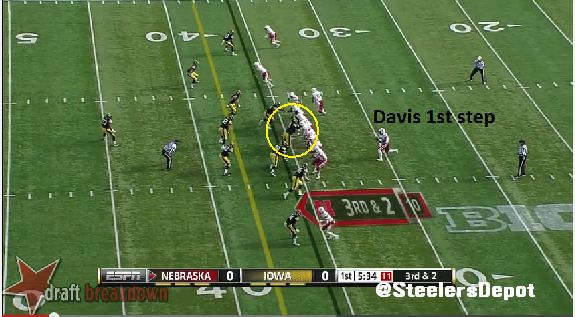 Impressive pass rusher with active, violent hands. Forceful punch against the right tackle on this stunt, knocking him off balance, out of the play, and Davis rewards himself by getting to the QB.

Even though it’s not a sack, it’s pressure that moves the QB off his spot. Davis’ swims over right guard. His arsenal is extensive, but this is his most effective move.

Shows awareness as a pass rusher. Gets his hands up and knocks the pass down. 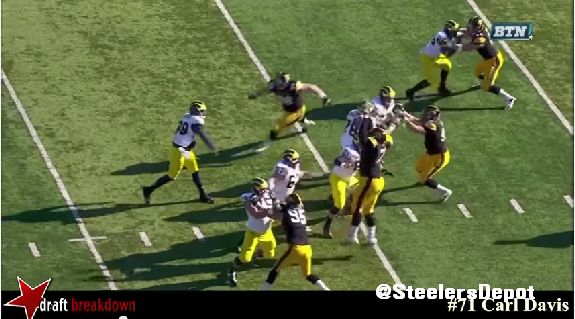 Against the run, however, Davis’ game does a 180. It gets ugly if he can’t win with explosion off the line. Biggest issue lies with his inability to stay square to the LOS. Leads with his shoulder, doesn’t get his arms extended, and consequently doesn’t use his hands like he should. Could do a whole montage showing this. 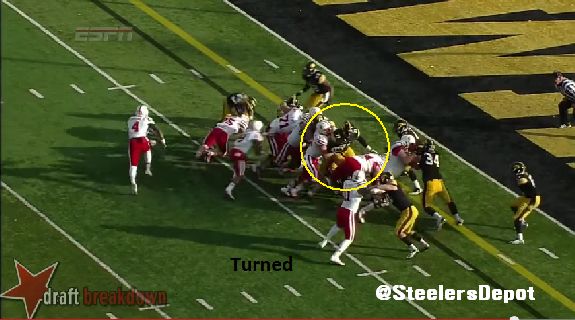 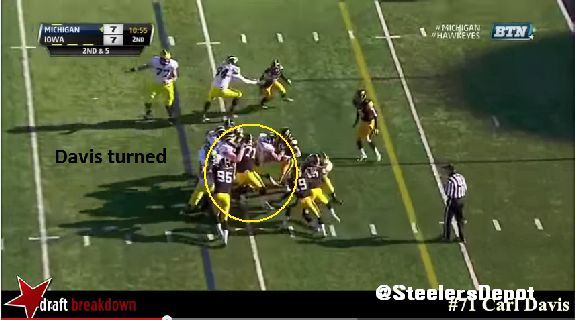 Completely spins himself around, losing sight of the ball carrier and being unable to fill. The runner blasts right through the lane, into the open field, and the end zone.

Can really see what I mean about the lack of a first step here. Bizarrely, no attempt to even move forward off the snap, and is easily pushed downfield. Davis is the LDT.

The few times he holds the POA against the run, he shows a lack of awareness. In this 2013 matchup against Michigan, he never disengages from the OL and make an attempt to attack the runner, who runs for a sizeable gain.

To be fair, Davis is a player who has always been playing catch-up to his peers. Because he was so heavy, tipping the scales at 230 pounds in the fourth grade, he wasn’t able to play football until high school. And he didn’t get to play along the defensive line until his junior year, his third and final school he’d attend.

Once at Iowa, he battled weight and knee issues to begin his career and didn’t start seeing results until 2013. There is still room for growth and it’s unfair to classify him as a finished product.

Still, those run defense issues are awfully concerning and I definitely don’t agree with some who identify him as a “run-stuffer.” It’s the opposite. He’s an above average pass rusher and a below average run defender. He has the length you desire for a team like the Steelers, even if he hasn’t played five tech before, but schematically isn’t a fit. Should find a home in a one-gap scheme that desires getting upfield and creating penetration. That’s how Davis will win at the next level. Run defense is too hazy to project. I’ll pass.