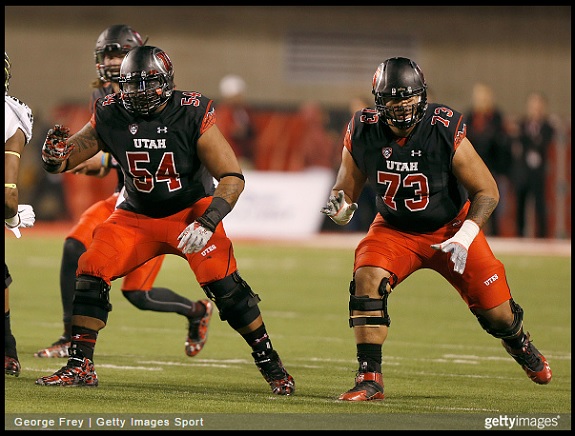 Per a reader request, taking a look at Utah offensive tackle Jeremiah Poutasi.

– Desired size and length (33 7/8 inch arms) and carries his weight well
– Has core upper body strength and when able to stick, generates a nice push
– Nasty demeanor and looks to finish his blocks
– Shows good burst out of stance, fires out initially, driven by his big, strong lower half
– Plays with a wide base, generates power in his lower half
– Bends knees in pass protection and attempts to play with a clean base coming out of his stance
– Lots of starting experience
– At least one full season at both tackle spots
– Durable, no known injury history
– Young and could continue to grow

– Just average laterally even if he cleans up lower half technique, struggles to seal the edge, likely to make position switch away from left tackle
– Feet go dead on his punch
– Waist-bender who loses his base trying to seal, has to sink his hips and overall, get lower
– Needs to take a better angle and gain more ground on his kickslide, will help him laterally in pass protection
– Overextends himself in the run game and falls off his blocks too easily, winds up on the ground too often

Poutasi is a big body at 335 but carries his weight well and in a uniform, doesn’t look sloppy. It wasn’t always evident but you can definitely tell his personality suits his position. Strong upper body and throws his weight around against the run.

Working as the left tackle, he drop steps, slams into the smaller lineman, and through all the traffic, you can see the defender fly in the air and flop to the ground. Poutasi drives into him for good measure. That’s some nasty that would make the hardiest of offensive line coaches grin.

Easily absorbs this small defender, throwing him to the ground as the QB breaks the pocket.

He may fire out of his stance, three years starting at tackle teaches you that in a hurry, but I question his lateral movement. Average at best, even if his feet gets cleaned up. I’m confident he won’t make it as an NFL left tackle.

Isn’t kicksliding at his proper 45 degree angle. Doesn’t gain ground and is beat by the right end.

In the pictures, you can see him double over as he tries to seal. 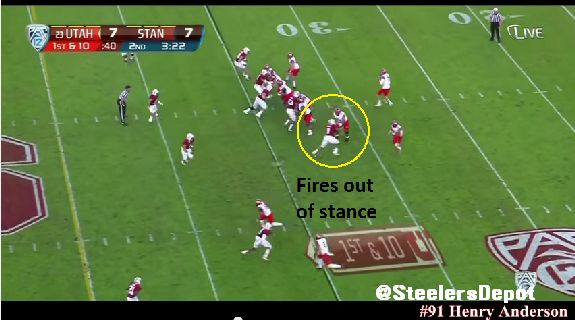 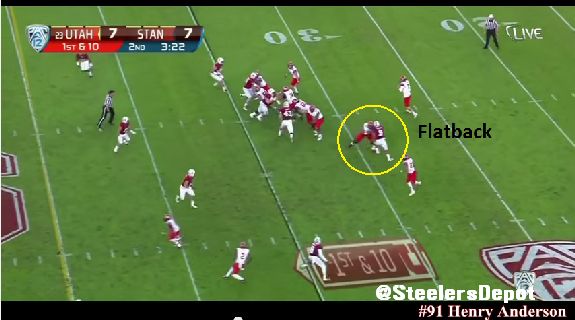 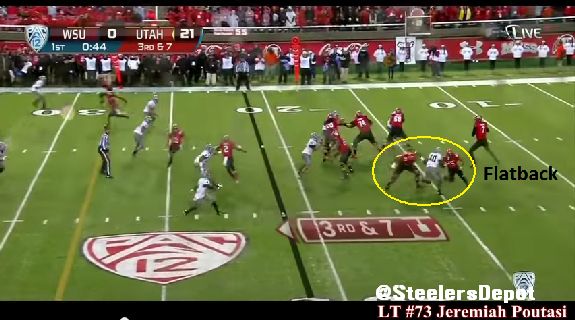 Some bad cases of flatback and another reason why he isn’t capable of protecting a quarterback’s blindside.

As a run blocker, the former Ute has the core strength we highlighted above. But technically, he’s spotty. Doesn’t always bring his lower half, causing him to fall off his blocks. We’ll show an example below. Can’t stick to his down block and the defensive end spins away.

Even if Poutasi cleans up his feet, he’s going to be – at best – a right tackle in the NFL. And there will be a lot of times that will profile him as a guard. I’d be inclined to do the same though at the least, he has the tackle versatility that gives him a slight boost in value. Ideally, he’ll play in a power scheme where he can generate a push against the run.

There’s the theory that you should be a big fan of every player you select, regardless of round. If we use that manta to apply it to Poutasi, there’s no way to justify taking him. There’s a little something there but nothing that makes you want to bang the table for him.

Games Watched: vs Washington St, vs Oregon St, vs Stanford