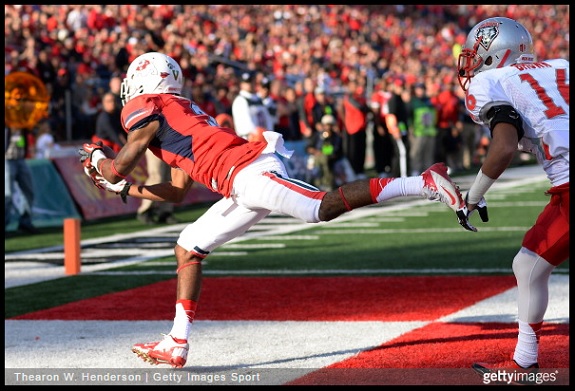 – Plus athlete, quick-twitch, with flashes a good burst off the line
– Soft hands, natural plucker who consistently extends them away from his body
– Doesn’t have top end speed but a vertical threat who competes for the football
– Impressive body control and ability to track the football
– Some surprising upper body strength who can bounce off tackles, quickness to make first defender miss in the open field
– Ability to play outside or in the slot, used more creatively as the year went on
– Productive career, strong junior and senior campaigns
– Good bloodlines and ties to the NFL

– Lean frame without any muscle, disproportionate length/hands compared to height (30 3/4 arms, 8 3/4 hands)
– Inconsistent explosion off the line, noticeably slower when running a short/intermediate route than something vertical, must do better job “selling deep”
– Struggles winning off the line against press coverage, indecisive and takes far too long to get even/swap hips
– More quick than fast who lacks top end speed
– Poor route runner who doesn’t really establish separation on short/intermediate routes, gets by on athleticism and perks off the offense
– Questionable toughness over the middle, may be contact-adverse and prone to making “business decisions”
– Doesn’t offer much as a blocker
– Benefited from a spread system, faced a lot of free releases
– Too many drops, misses some easy ones
– Persistent injuries that limited him first two seasons though finished career healthy

– 28 career starts
– 2014: 90 receptions, 1097 yards 7 TDs
– First Team All-Mountain West senior season
– Missed two games due to foot injury in 2011, sat out first game of 2012 with hamstring and missed another seven due to a sports hernia
– Underwent surgery on core muscle in offseason before senior year, didn’t miss any games
– Prolific high school career, played both ways, nearly 2700 career receiving yards and 28 touchdowns, also a great returner
– Father, Willie Harper, drafted in 2nd round by 49ers in 1973, played ten years in the league
– Has family in the NFL, sister works in “premium seating and service” role for Raiders, brother is assistant defensive backs coach for Eagles

Though he is prone to an ugly drop, I love Harper’s ability to get his hands extended away from his body. Soft, natural hands catcher. Very few passes get into his chest.

High points the football with a defender dropped over him in the end zone. Ultimately can’t get a foot in bounds but nice effort and shows his hands.

Plucks this one in the air. 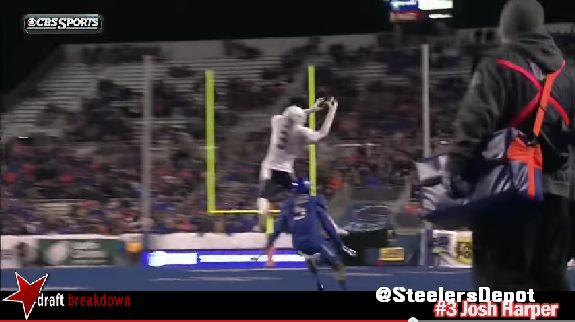 Fluid in this sluggo right, getting some separation on the corner, tracking the ball, and scoring. Beautiful pass helped, too.

Harper is an athlete with quick feet at the line but dances too much and takes too much time to win off the LOS. Will need to adapt to NFL timing routes. Everything must be precise and any discrepancy because the receiver can’t win off the line is going to lead to a lot of incompletions.

Never been a fan of the “hop step” to win off the line, even if the end result is a catch. See it here top of the screen against USC.

Harper must be more consistent on his initial steps off the line. Explosive when he knows he’s running vertical, noticeably slower if it’s a curl or dig. Must learn the nuances of “selling deep,” so the corner can’t read and sit on it. You’ll see the difference below, two clips from the same game.

Even more concerning, as you’ll see before, Harper alligator arms this pass going over the middle. Feels the defender and only reaches out with one-arm. Gets crushed anyway. Incompletion and bruised ribs.

Part of it is due to Fresno State’s offense but Harper wasn’t forced to run crisp routes. Lots of three and four wide receiver surfaces that let him have a lot of space to sit down in. Didn’t need to work hard to get open. Too often was looking back for the football instead of creating separation. He’ll have to develop at the next level. And without top end speed, ran a 4.64 at the Combine, he could struggle to find a home at the next level.

If he does contribute on Sundays, I wouldn’t expect it to happen for three or four years. Has to reinvent himself and that will take some time. Not sure I see him being successful in the NFL. Light years away from the prospect Davante Adams was.

Games Watched: at USC, vs Nebraska, at Boise St, vs San Jose St