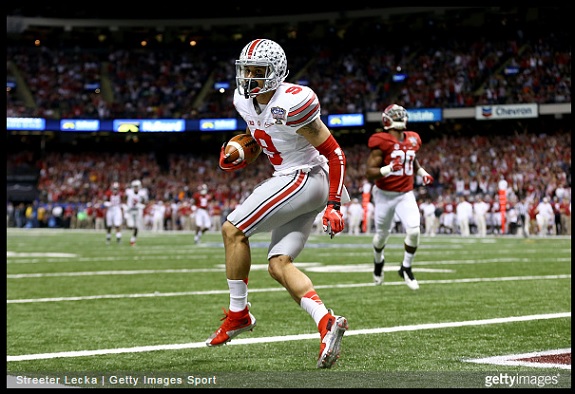 Since we haven’t covered many so far, we’ll break down a wide receiver. The speedy Ohio State wideout, Devin Smith.

– Fantastic top end speed and a big play threat
– Long-strider who eats up cushion, forces corners to open the gate early
– Explosive first step off the line, great burst and acceleration
– Maintains speed through his cuts, fluid athlete overall
– Capable of tracking the ball while maintaining his speed
– Natural hands catcher who gets them extended away from his body, increasing catch radius
– Quick to the tuck, explosive and gets upfield immediately after the catch
– Some special teams work, mainly on coverage units
– Statistically gaudy numbers in 2014
– Durable, never missed a game due to injury

– Lean frame without much muscle and small hands (9 inches)
– Fair to question if he is a one-trick pony, only a vertical threat, didn’t run a balance of routes in school, mainly vertical, must show he can run entire route tree
– Unreliable run blocker who falls off too easily, lacks strength, terrible bench press number at combine
– Never had an expansive body of work, only topped 35 receptions once in his career
– Doesn’t hold the accolades other receivers do

Statistically, Smith had a unique2014 campaign. Only 33 receptions but a remarkable 28.2 per catch average, putting him just under 1000 yards for the season. Found the end zone 12 times, including at least twice in three contests. As I noted above, 17 of his receptions went for at least 50 yards.  That’s over 51%. Turned in a 4.42 at the Combine and that speed translates on tape. His highlight reel are mainly fly patterns.

GIF below is probably my favorite catch of his. Can see the speed, aided by his long strides, ability to track the ball, extend the hands, make the grab over the shoulder, and though the angle doesn’t show it well, with the corner grabbing Smith’s inside arm.

Shows off that track background and the ability to find the football, extend, and make the grab in the end zone against Wisconsin. One of three touchdowns he’d score that day.

Or simply out run everyone. Even on an angle, the safety can’t catch up.

It was something I didn’t get to see often so I didn’t include it in the overall report but he flashes his football IQ by sliding down into the open zone away from the linebacker. 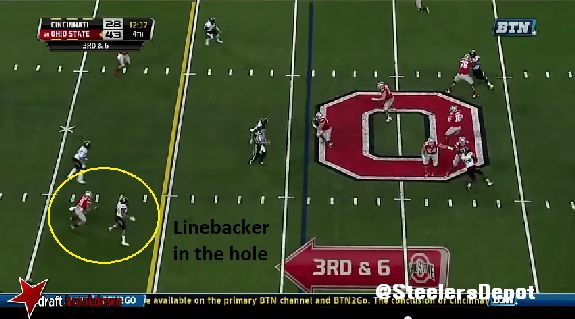 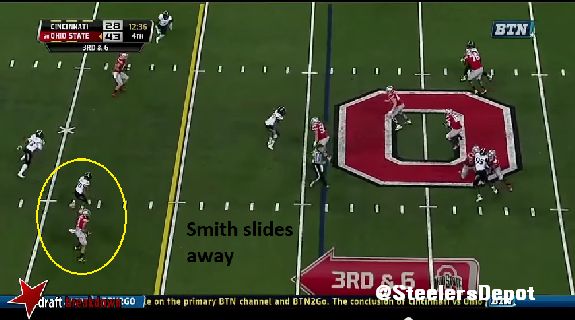 The lack of receptions makes his tape limited. Always makes me a bit uneasy if I can trust what I’m seeing. Sample size is small. Very early-career Mike Wallace tape. Tons of vertical patterns, not much else. Doesn’t mean he can’t do it and physically, he has all the tools to succeed, but it’s not something often projected onto tape.

Also lacks strength and even by a receiver’s standards, his ten reps of 225 in Indianapolis on the bench press are pretty pitiful. Tied for the third worst mark at his position the Combine.

Might give some effort in the run game but falls off and has trouble sticking to his blocks. 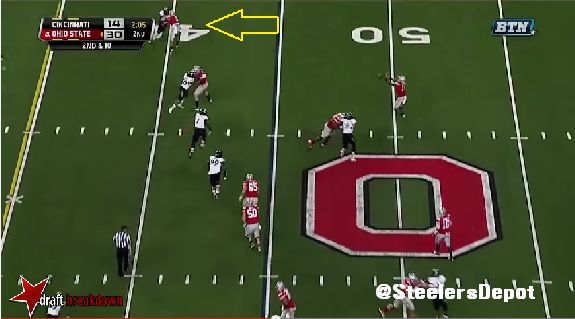 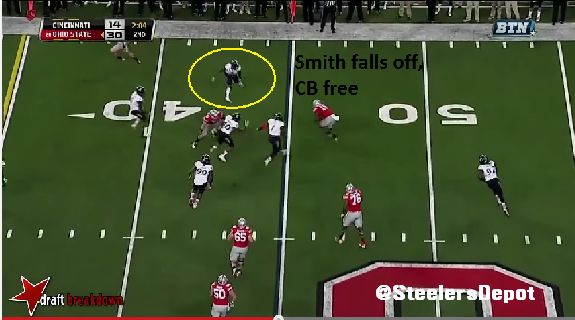 Can’t get in front of the corner, lunges, whiffs, and the defender is in on the tackle.

Bottom line: Smith has all the tools you want in a receiver. It’s about repping the route tree and really working hard with him to unlock that talent in order to turn him into a complete player. Makes him a project but one with a big payoff. At his best, he compares favorably to Mike Wallace. At his floor, Chris Givens.

Sneaky chance to duck into the late first round but see him more of a second rounder.

Games Watched: vs Cincinnati, vs Illinois, at Michigan St, vs Wisconsin