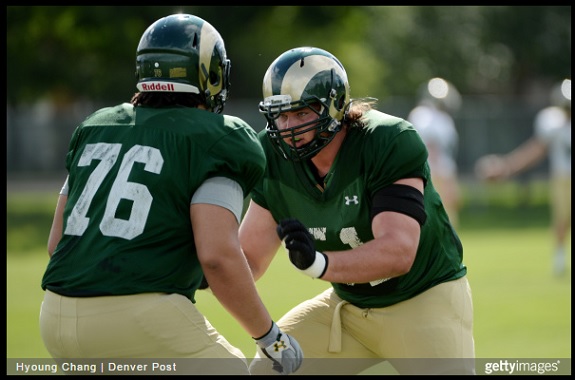 The Steelers may not have a glaring need at tackle, with Kelvin Beachum and Marcus Gilbert holding down the fort at each tackle spot, but depth is never something to be shy on. Depth may be needed and with nagging injuries bothering Gilbert at times, it definitely cannot hurt. Today, we focus on Ty Sambrailo.

The Good
-Ideal size for tackle
-Excellent at mirroring pass rushers
-Has a great kick slide
-Frame has room for more weight
-Finishes his blocks, plays until the whistle
-Has some nastiness to his game
-Plus athlete
-Gets to the second level
-Great feet in pass protection to stay balanced
-Can be a mauler in the run game
-Handles finesse moves well
-Versatile: has experience playing both tackle and both guard positions

-Needs work in the run game, hand usage is inconsistent
-Gets knocked off balance at times
-Has the tendency to not stick to his blocks in the run game
-Needs to work on is first punch in the run game to be consistently explosive
-Has to learn how to unleash power in his hands
-Attempts to chop block but rarely succeeds
-Missed 2 games due to knee injury

It didn’t take me long to recognize Sambrailo’s strengths and weaknesses. His ability to pass protect is excellent and he is a true technician when it comes to mirroring and kick sliding.  His run protection needs work as he has trouble sticking to defenders and using his strength. His core needs strength needs improved also. His feet move quickly and he is athletic enough to keep up with edge rushers and defensive ends.

Sambrailo really has some nastiness to his game. Every snap is a personal battle and he doesn’t like to lose. He finishes his blocks and makes defenders rethink about challenging him again. Here, he takes on the defensive end from start to finish and shows some nastiness at the end. Love the passion; just don’t want that passion to end up in 15 yards at the next level.

Not sure what Sambrailo was trying to accomplish with this block. He barely touches the defender. He ducks his head down and doesn’t turn his hips to the defender either. His form is horrible and he does not display his athleticism. Not like himself here at all; would love to know what he was thinking.

Sambrailo displays a great kick slide here as he takes on edge rusher Nate Orchard. His mirroring ability is much to be desired for. Orchard doesn’t get near the quarterback and Sambrailo has done his job, as he has done many times before. This is exactly what you want out of your tackles, especially against the silver medalist to the sack crown.

Sticking to blocks in the run game is an aspect of Sambrailo’s game that really needs improved upon. His arms aren’t the longest at 33 inches, so he needs to engage defenders with his length and athleticism. He needs to square his shoulders with the defender and not be off balance. Defenders take advantage of this and make plays.

At times, Sambrailo can be considered a mauler in the run game. He has all the tools to be efficient in this facet of the game; he just needs to put the tools together. Here, he has done just that. He engages to the defender, sticks, and uses his legs to drive the defender into the ground. If he could do this on a consistent basis, he would be more highly regarded.

Hand usage in the NFL is becoming more and more common as defenders slap and offensive lineman repel. In this GIF, the defensive end gives Sambrailo a run for his money and is fighting with his hands to gain the edge. Sambrailo doesn’t do a terrible job, but he lets the defender get the better of him. Luckily, the quarterback got the ball out quickly. In the NFL, he won’t get away with being sub-par in this area. He needs to improve, which he can.

Finesse moves are either a success or failure. They can really give tackles a difficult time when it comes to protection because they are unpredictable and it puts the tackle in a tough position – which can result in being out of position. In this case, Sambrailo is not fazed by the spin move and keeps his body squared up with the defender. He keeps his feet moving and contains the defender, not letting him cause himself to be unbalanced.

Sambrailo will be used more in a pass-heavy offense due to him excelling in that area. He needs to work on his run game and Mike Munchak is the perfect coach to brighten up Sambrailo’s future. Mike Adams is still a work in progress and his contract will be coming to an end soon. The Steelers will face a tough choice to keep the project tackle with off-field issues and some failed starts. Mike Tomlin will discuss things over with Munchak and determine if Adams is worth extending or not. Nonetheless, the depth at tackle is not all that great. Alejandro Villanueva is the other tackle on the roster that would seem to be fit to take Adams place if need be, but he has no game experience at tackle. Drafting Sambrailo could be used to solidify the tackle spot if Gilbert or Beachum goes down with an injury, or if Gilbert doesn’t stay healthy and consistent. Adams was serviceable in the games he filled in for Gilbert, but Sambrailo has great upside and a higher ceiling than Adams. The Steelers have had their fair share of injuries on the offensive line through the years so some insurance couldn’t hurt, especially if the value is present. His draft stock is dependent on the offense being run and the coach being comfortable with his flaws ultimately in the run game.