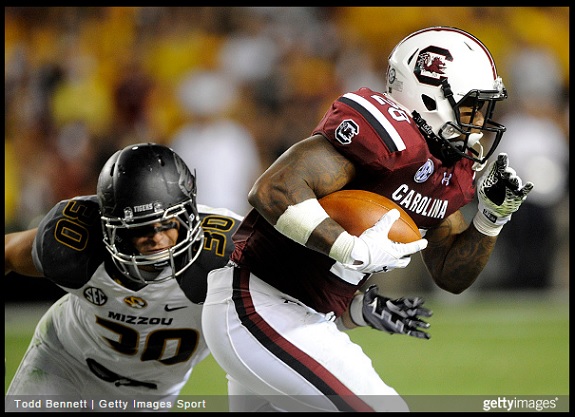 It seems the Steelers have found their starter for the first couple of weeks in DeAngelo Williams while Le’Veon Bell is serving his suspension. Today, we will look at Mike Davis.

-Good size
-Shifty, quick in his cuts
-Adequate in pass protection
-Versatile, lines up in backfield or wide out
-Has quick feet
-Great hands, especially out of the backfield
-Reads blockers well, has good vision
-Hits another gear when he gets to second level

-Doesn’t break many tackles
-Needs to learn to go north and south, not east and west
-Lacks speed to bounce out runs or get to the outside
-Not a home-run back
-Stiff hips, can’t get defenders to miss
-Rib Injury in 2013 caused him to “lose a step”
-Limited ceiling
-Doesn’t identify big holes
-Was more productive in 2013 rather than 2014
-Dealt with ankle, shoulder and ultimately rib injuries

Davis has great hands; out of the games I watched I didn’t see him drop the ball once. He also excels in pass protection. Along with pass protection, the Steelers also value reliable hands out of the backfield. He has a lot to work on, and the 2013 version of himself outdid his 2014 self. He never wow’d me and only a few times did I get frustrated with him.

Davis is good at knowing when bounce out runs. Here, the lane that Davis is supposed to go through collapses, so he bounces it out for a good gain. Wish he was more of a playmaker, but he does his job.

One of the things about Davis that really hurts him is his stiff hips. Due to this, he is not elusive at all and can’t get defenders to miss often. Here, he follows his blockers to the outside but his stiff hips have him getting knocked down. The lack of elusiveness really hurts Davis.

Here is another instance of Davis seeing his initial running lane collapse and bounce out the run. He uses his shifty feet and instincts to follow his blockers to the end zone. Aside from the great wide receiver blocking, Davis does everything right. He went into another gear once he got to the second level and made defenders miss by shifting at the right time.

The pictures below show where Davis chose to go (red) and where he could have went (yellow). Not the most wise of choices for either play. He has much more room to work with to the left and to shift into that second gear and make big plays. 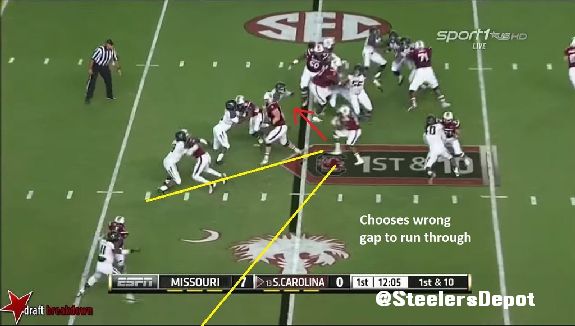 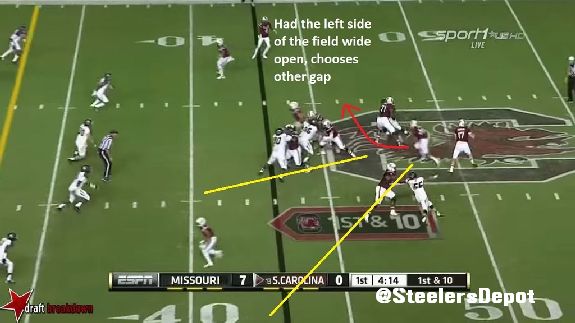 Here, Davis hits the hole quick and with some authority. Again, he demonstrates his second gear once he gets to the second level. Hitting the gap quickly, Davis makes potential tacklers miss and is able to high step into the end zone for the touchdown.

One of Davis’ biggest flaws is that he cannot break tackles and goes down too easily. Here, Davis runs into trouble at the line of scrimmage so he bounces it outside. The South Carolina guard fails to stick to the Georgia defensive end and he is able to get a hand on Davis’ foot, causing him to go the ground. Resulting in a five yard loss is never what you want, especially from a back that should easily be able to stay on his feet. Great running backs down go down easily, especially by one hand.

Even though Davis wouldn’t typically get an option pitch in the Steelers offense, he does a great job on this play. He recognizes the path he needs to take and gets great blocks from his teammates. His second gear is something to be desired, as it is displayed constantly.

Posting a 11.84-second 100 meter dash in high school, you would think he would have some wheels under him. Not in Davis’ case. He was much faster in 2013 and after his rib injury he lost a step. Here, he has a lot of real estate to his right and can’t outrun the defender. This is an instance of him going down too easily and his lack of speed. He really lives up to his 4.66 40-yard dash time.

Pass protection is vital in Steeler running backs. Which brings me back to the 2014 draft when the 175lb Dri Archer was selected, confused? Me too. Unlike Archer, pass protection is no problem for Davis. Here, he takes on a blitzing linebacker with ease and assures that his quarterback has time to throw the pass. Kudos to Davis.

Overall, I was not impressed by Davis nor was I disappointed. He is not flashy by any means but he gets the tough yards. I don’t see him as a starting caliber right now whatsoever. Unless he is forced into a starting role due to injuries, I don’t see him seeing much of the field. There is so much he has to tweak to his game and improve on, and they’re not minor fixes either. You can’t teach an athlete not to go down so easy or to not get injured.

He was more productive in 2013, which made me look into his 2013 tape. I skimmed through and I saw a huge difference in speed, he has clearly dipped in this area. Either he was playing injured or gained weight that he isn’t carrying well. You don’t go from 11.84-100 meter dash speed to 4.66 40-yard dash speed overnight.

If I’m the Steelers, I pass. Look at his measurables and they match DeAngelo Williams almost perfectly. Davis: 5’9”, 217lbs. Williams: 5’9”, 215lbs.They already have this guy on the roster, no need to draft another. The drafted running back by the Steelers needs to be a change of pace and offer more than just good hands and pass protection. He has an amazing backstory, but a short ceiling isn’t enough for me to turn in my card on him. My consensus on this guy is summed up in just about one word: average.